Do you reject Saban and all his empty promises?: Revisiting Alabama. 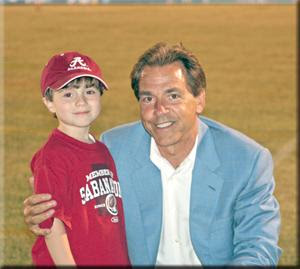 An extremely rare photo of Nick Saban actually having time for this shit.

What I said at the time: Insolent tweaking of the Great and Powerful Nick . . .

Obviously the upgrade from Shula to Saban at head coach has to be worth some wins all by itself, but just how many is open to debate; even Saint Nick didn't win a national title in his first year at LSU (and in fact managed to lose to UAB). And the last time Mark Richt faced off against Saban, Richt sent him out wearing tight pants and lipstick following a 45-16 blowout.

. . . and the digging-up of fond memories of the season-making game that the Dawgs won in Tuscaloosa in 2002:

Somehow I can see this one stacking up a little bit like the "man enough" game in 2002, which Georgia won by operating a very consistent rushing attack while preventing any of Bama's rushers from getting into a rhythm . . . As with the 2002 game, Georgia builds an early lead with smart QB play and by holding down the Alabama ground attack, then watches that lead disintegrate as Alabama adapts to what we're doing, but gets a big punt return late (say word Mikey Henderson) and a game-winning FG from Brandon Coutu. 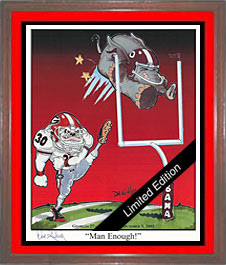 Yup, of all the games to relive, that one would be right up there.

Care to amend your initial statement, sir?: Well, in the sense that Bama already looks way better than I thought they would, yes. While I lauded their offense, particularly the passing game, in that preseason preview, I was secretly hoping that their offensive line and RB committee would still be getting figured out by the time Georgia came calling, but those units seem to be pretty solid, with Terry Grant doing very impressive work as the presumptive featured tailback.

There are, however, some weaknesses that remain to be exploited if the Bulldogs can figure out how. Roll Bama Roll does an excellent job here explaining why the causes of Bama's second-half defensive "meltdown" are not quite what they seem; based on that analysis, it looks like Arkansas was let back into the game by a Tide defense that is talented but lacking in depth, and that wasn't helped out by an offense that couldn't stay on the field for more than a few plays at a stretch.

Does this bode well for the Bulldogs? Yes and no. Certainly, Knowshon Moreno and Thomas Brown are not up to the level of Darren McFadden and Felix Jones, but if your goal is to grind some yardage and wear out an opposing defense, you could do much, much worse than a Moreno/Brown tandem -- so Senator Blutarsky's recommendation to "stick with the running game" seems like pretty sage advice here. On the other hand, recreating Arkansas's second-half success against Alabama will also require creating some turnovers, if the RBR commentary is any indication, and I'm less confident in Georgia's ability to do that. Through three games, Georgia has only one takeaway, a late interception against Oklahoma State; after sacking OSU quarterback Bobby Reid five times, they only notched three total sacks against South Carolina and WCU. Against Alabama, we've got to do much better in both areas. John Parker Wilson is a talented passer with a wealth of receiving weapons at his disposal, and the Dawgs can't afford to give him any extra decision-making time; they've simply got to get more pressure than they've gotten in their last two games. 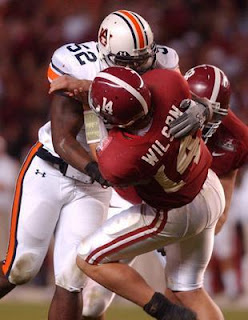 Fortunately, Georgia has played fairly clean football themselves in terms of turnovers -- only two so far, one of them a tipped-ball pick on what was basically a Hail Mary against South Carolina. They've given up six sacks, which is not terrible for such a young offensive line, and Alabama has only notched four sacks themselves. Even if Stafford is unspectacular in the stats department -- as he was against Georgia Tech and Virginia Tech at the end of last year -- Georgia will be OK as long as he continues to avoid turnovers. (That shouldn't keep him from shying away from long-ball opportunities, though; Casey Dick, usually the equivalent of a third nipple for Arkansas's offense, had a solid three-touchdown day against the Bama secondary, so Georgia's coaches need to trust Stafford to air it out when a favorable matchup presents itself.)

Run the ball, pressure the QB, limit turnovers -- even if they do all these things, the deck is still stacked against the Dawgs in the sense that they're playing in a highly unfriendly venue, they still don't quite have the passing game hitting on all cylinders, and they don't necessarily have the confidence of a team that's gained momentum with three straight wins and knocked off a ranked opponent. But there are some intangibles that may work in their favor. 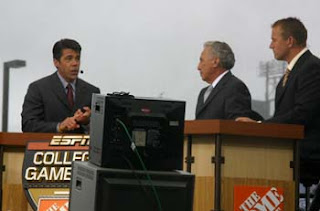 Chris, Lee, and Herbie decide which team they should doom with their mere presence on Saturday.

First, ESPN's "College Gameday" is going to be in Tuscaloosa this weekend, and while that isn't exactly good news for either team -- Alabama is only 3-6 when "Gameday" is in town, Georgia only 2-7 -- it may actually be worse for Bama: All three of their "Gameday" wins came way back when Gene Stallings was coach, while three of Georgia's losses are to Florida, which virtually puts them in the "preordained from the Big Bang" category. And here's something else weird, something I never would've guessed: Georgia has never lost a true road game at night under Mark Richt -- they're 8-0, in fact. Some of those wins are against scrubs, of course, but they also include the 41-14 ass-beating of Tennessee in 2003 and last year's shutout of Spurrier in Columbia.

This speaks to an aspect of Georgia's general attitude under Richt that has confounded and overjoyed Bulldog Nation in nearly equal measure over the last six-plus seasons: As bad as we might look in games that we should win easily, we somehow do a miraculous job of preparing and focusing for the subsequent games in which we look like we should have no chance at all. Last year was an obvious example, with our ugly 1-4 midseason stretch being followed by a 3-0 tear against ranked squads, but it holds true for the 2002 season as well. A sloppy outing against Clemson, a major struggle against what turned out to be a pretty mediocre SC team, and two disinterested outings against scrub opponents were what led Pat Dye to famously suggest that we weren't "man enough" to win in Tuscaloosa the following week -- yet we ended up doing just that. If you think about it, the end of 2005 followed a similar pattern -- close losses to Florida and Auburn that should've been wins, so-what win over Kentucky, win over Georgia Tech that was way closer than it should've been to any Reggie-Ball-quarterbacked team, but then we came right back out and punched third-ranked LSU in the mouth to claim the SEC title. We looked like crap against South Carolina and looked like we'd rather be taking a nap against WCU, but if history is any guide, very little of that is going to have any bearing on what happens in Tuscaloosa tomorrow. 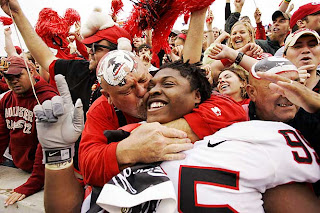 Not just anyone can lose to Kentucky and then annihilate Auburn the very next week . . . but we can!

What will have bearing on the game is talent and coaching, and I don't think Georgia needs to concede anything to Alabama on either of those points, even if Alabama has a statement win on their record and Georgia doesn't. In fact, if the scuttlebutt from Tony Barnhart is any indication, the big win over Arkansas may be exacting a price from the Tide in the sense that they "laid it all on the line" last week and will be hard-pressed to dial up that level of emotion for a second week in a row.

No, I know there's really no reason on paper to think Georgia will win here, but I can't help it: I think they've got a good shot. So I'm throwing caution (and karma) to the wind and allowing my initial prediction to (mostly) stand. Georgia scores early, holds a small lead for most of the game, sees that gap narrow (if not evaporate entirely) in the fourth quarter but gathers themselves up to drive for a late FG and the win.

I will run up and down Highland Avenue in front of my apartment building wearing nothing but a Georgia flag if: We win, period. Whether it's by an overtime FG or by 30 points, I don't care. A win is important enough to me that I'll gladly trade some public embarrassment (and, theoretically, a kidney) for it; the entire city of Birmingham, and even large swaths of the UAB campus, are crawling with Bama fans, and I'd just as soon not be another scalp on Nick Saban's belt. I would, however, love for the Dawgs to go down in history as the team that handed Saban his first loss with the Tide -- because then I get to hear dozens of rabid Bammers calling in to Finebaum bitching about Saban being overpaid since "We ain't payin' him $4 million to LOSE." Honestly, who (outside Tide Nation, of course) wouldn't find that entertaining? 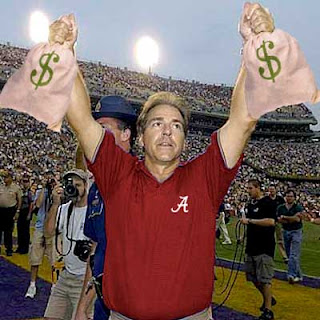 Here's to handing Alabama their most expensive loss ever. Go Dawgs!
Posted by Astronaut Mike Dexter at 1:31 PM