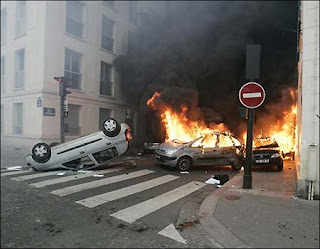 So, how'd your weekend go? Anything interesting happen?

Well, that was a fun weekend, wasn't it? OK, perhaps more fun for some than for others.

Howdy, schmucks -- I'm the BlogPoll voter selected to host the first Blogger Roundtable of the 2007 regular season. At first I was really excited when Brian from MGoBlog tapped me for the job, but after the Mother Of All Upsets this past weekend, that "honor" is looking more and more like having your 21st birthday on September 12, 2001. I considered declaring this roundtable an App State-Free Zone, both out of courtesy to our BlogPoll host and because honestly, there really aren't that many questions you could ask right now where the immediate obvious answer wouldn't be "OMG MOUNTAINEERZ!!1!1!!" In the end, I decided not to be quite that dictatorial, but seriously, let's try to have some variety in your answers here, and not just continued rehashing of an upset that's already been alternately lamented, heckled, discussed, debated, dissected, and otherwise Zaprudered on every blog from Ann Arbor to Ulan Bator.

Think you can handle that? All righty then.

1. By the end of the season, some previously unheralded teams' bandwagons will be so full they'll be having to bump passengers and offer them free vouchers and first-class upgrades; others will have emptied out in a big way. On whose bandwagon are you already scrambling to save a seat? Conversely, which team's bandwagon is being driven by Toonces the Driving Cat, prompting you to leap off now before it careens over a cliff to its fiery death below? 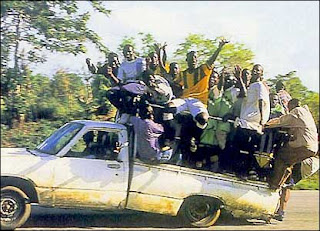 I'm giving serious thought to booking a ticket on the bandwagon of Boston College, who bounced back impressively from an early 14-0 hole to whack Wake Forest on Saturday. I guess I was kind of counting the Eagles out because I never like picking a rookie head coach to go too terribly far, but the numbers don't lie -- Matt Ryan, last year's ACC-leading quarterback, picked up right where he left off, and the defense held the defending conference champions to just 2 net rushing yards (and while they allowed 366 passing yards to the Demon Deacons, they did pick off the Deacs' QBs a total of four times). BC isn't without its flaws -- their own rushing attack didn't accomplish much on Saturday -- but who knows? If Wake Forest can win the ACC Atlantic, then maybe a first-year head coach can; it's certainly not like the division is any less up for grabs than it was last year (though tonight's FSU-Clemson game may modify that view some). 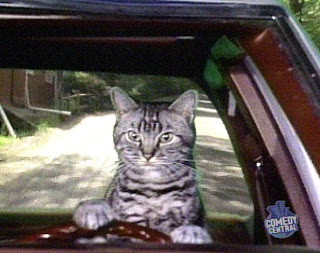 Sadly, Texas is the bandwagon aboard which I'm starting to glance anxiously around and murmur, "No, it's cool, just let me off here, I'll walk the rest of the way." A team accustomed to kicking the season off with a 40-point jackhammering of a cupcake opponent instead found itself getting chased by Arkansas State right down to the last minute of the game; the 'Horns were actually outgained 397 yards to 340, leading me to wonder if their pass defense has really improved at all over the one everybody dogged so much last year. That's not going to cut it against Nebraska or Oklahoma; it may not even cut it against TCU next week.

Bandwagon status TBD: Virginia Tech. The defense looked every bit as awesome as I thought it would against East Carolina, but unfortunately, the offense didn't hold up its end of the bargain (though surprisingly, Sean Glennon ended up having a much better game than any of VT's running backs). The odd circumstances surrounding the game, though, keep me from drawing too many broad conclusions; I'd just kind of assumed that the emotions that sprang from honoring the victims of the April mass shooting would've driven the Hokies to pound their opponent from the very beginning, though in hindsight I can see how those emotions might've been more distraction than inspiration. Which all brings me to the next question:

2. What do you think was opening weekend's biggest mirage -- either a "big win" over a team that isn't really as good as everyone thinks, or an embarrassing loss (or embarrassingly close win) that won't seem quite as embarrassing by season's end? 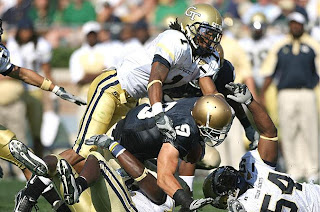 I hate to rain on Georgia Tech's parade, but -- wait, what am I saying? I love raining on Georgia Tech's parade. If I saw a "help wanted" ad in the paper for Senior Georgia Tech Parade-Douser, I'd send a résumé, a promotional DVD, and line up references from everyone I've ever worked with ever. Anyway, this is my way of saying that beating Notre Dame 33-3, while certainly a solid win, is not quite the same thing as beating Southern Cal 33-3. You don't have to be Ivan Maisel to have figured out that this is probably the least talented team Charlie Weis has fielded in his three years in South Bend -- hell, even Weis knows it, or he wouldn't have been screwing around with the press and the fan base the past two months like Bill Clinton trying to explain the lipstick on his collar. Tech's defense straight-up destroyed the Irish, but QB Taylor Bennett may not be ready for prime time just yet (in fact, the exact words the Columbus beat writer used to describe his performance was "Ball-like" -- tell me that didn't just send your blood pressure up 20 points, Tech fans). Again, solid win, and an impressive level of domination from a team that hasn't developed a reputation for real blowouts under Chan Gailey, but don't let the Notre Dame brand name fool you into thinking that this was some kind of historic thrashing.

3. Compared to how you felt Friday night, how do you feel now about your team's chances this season? I'm not just talking about your impressions of your own team -- also take into account their prospects relative to this year's opponents, whom you've also gotten a little more acquainted with after this past weekend's action. 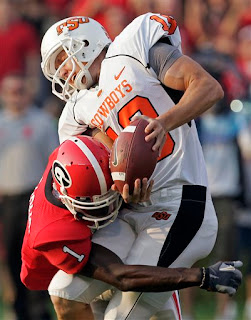 Oh, you were going to punt that? Here, I'll save you the trouble.

Needless to say, I feel pretty good about the Dawgs right now, both as an individual team and in the context of the SEC as a whole this year. I think the area in which my most substantial fears were allayed was on defense, about which my attitude has ranged from "extremely cautiously optimistic" to "start praying, the world ends in 24 hours" ever since both the Red and Black offenses ran rampant in the G-Day Game. There were times when I feared we'd be trying to win shootouts every single Saturday, a strategy which, in today's SEC, is equivalent to walking into a bar and deciding you're only going to hit on girls who are already there with guys. Now, though, I'd say we have more than a fighting chance. That's not to say we're going to be clamping down on Florida's or Alabama's offenses the way we did Oklahoma State's, but we're not going to have to score 40 points every single week, either.

4. Looking at how those future opponents performed this past weekend, which developments are you most excited about? Which of your opponents' performances have you a little worried? 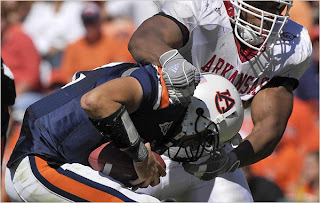 Over/under on time until some Alabama fan starts printing up "Honk if you sacked Brandon Cox" bumper stickers: 47 1/2 days.

Auburn's shaky outing against Kansas State has me a little more optimistic about a game I've already picked Georgia to lose this year. As I'm sure you've already heard, Auburn has had a pretty amazing track record of success with fifth-year quarterbacks, but that may not continue if their noob offensive line can't protect Brandon Cox any better than they did Saturday night, giving up five sacks to a K-State squad trying out a 3-4 front for the very first time. Injuries were a major reason why Cox underperformed so badly last season, and if the Auburn line doesn't come together in a big hurry, he could be pushing the joystick on an electric wheelchair with his chin by the time they play Georgia.

Also cause for optimism: Tennessee getting carpet-bombed (and still not showing much of a running game) against Cal; Tech's aforementioned troubles in the passing game.

Worries: Tim Tebow being on fire in his very first start, for one. Granted, it was against Western Kentucky, but we had WKU for our opener last season and none of our guys looked that good. Also, while Georgia Tech's passing game might be a work in progress, their defensive front clearly isn't. Nine sacks against Notre Dame? I'm confident our O-line will be clicking together by the time we head to the Flats the weekend after Thanksgiving, but Tech could still very well be the biggest challenge they face all year.

5. There are now 32 bowls in D-IA football, meaning 64 bowl teams, meaning any given team now stands a better-then-50-percent chance of going to a bowl. To get that number under 50 percent, we'd have to eliminate three bowls. Which ones would you get rid of?

The Papajohns.com Bowl probably has the stupidest name, but it's in Birmingham, so I can't get rid of that one. The next-dumbest name belongs to the Meineke Car Care Bowl, which takes place in Charlotte; the only outstanding memory I have of that city is my family's station wagon getting broken into when we stayed at a Days Inn there years ago, so kiss your bowl goodbye, Charlotte. I'm also not a fan of bowls that appear to have been set up solely as an excuse to give the hometown team a 13th game, so away you go, New Mexico Bowl. (I would've put the Fort Worth Bowl in that spot, particularly since TCU is good enough that they have no need for such a blatant gimme, but it's called the Armed Forces Bowl now and I don't need a bunch of people coming on here telling me I hate the troops.)

6. And finally, in 50 words or less, how happy are you that it's finally football season again?

I was getting worried at how worked-up I was over the Oklahoma State game, until I realized something: Worked-up is my baseline. Football is more than a game, it's a life-sustaining force; the other seven months of the year, I might as well be taking a nap. 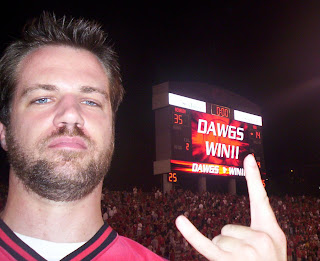 Not positive, but I might have been a little hammered when this picture was taken.

I look forward to reading your responses -- once they're up, drop a link in the comments thread or in an e-mail. The Roundtable Roundup will hopefully be up Friday, assuming I don't end up in jail between now and then.
Posted by Astronaut Mike Dexter at 8:26 AM

First in your hearts, last on your blogroll:

Wait, so you're saying I should blame Applachian State for the death of irony now?

Why am I terrified of the team that lost to the 1-AA team last week? Oh yeah, because my team doen't play defense.

Thanks for hosting. Great Questions!

Matt
My Opinion on Sports
http://myopiniononsports.blogspot.com/2007/09/blogpoll-round-table-2.html

I think that midget quarterback for Auburn is still busted up from last year. He'll be in traction by the Vandy game.

Eleven Warriors are in @ http://www.elevenwarriors.com/2007/09/week-1-blogpoll-roundtable.html.

Off Tackle response is up:
http://offtackle.blogspot.com/2007/09/blogpoll-roundtable-2.html

Actually, as a fan of the team that narrowly beat La-La, I say we dispense with the first week altogether.