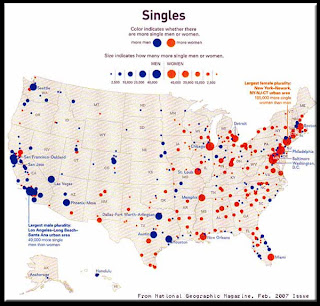 · I'm calling shenanigans on this map (found at the weirdly entrancing Strange Maps blog) that says pretty much anywhere east of the Mississippi is a dude's paradise in terms of the male:female ratio. If that's the case, then shouldn't I be in a relationship right now in Birmingham, where men are supposedly outnumbered by women by at least 10,000? Or is it my insistence on wearing my assless leather pants on first dates that's causing the problem? Nahh, it couldn't be the pants. Not with all the sugarcane I'm carrying in my backyard -- that thing is sweet.

· Who didn't see this one coming? Ohio State fans have suddenly found a new favorite non-Buckeye team to root for, and it's Appalachian State.

"If I had a dollar for every time someone's asked, I could retire," said manager Greg Pierson at Sports Fan Attic.

I would say something snarky here like "Stay classy, Columbus," but lord knows that if Florida or Tennessee somehow lost to, say, Wofford, this blog's color scheme would be changed to black and gold for a solid week.

I'm already, of course, a big fan of their mascot.

· Just down the road in South Bend, newly named starting QB Jimmy Clausen has become his own sport -- or so said CBS Sportsline earlier this week: 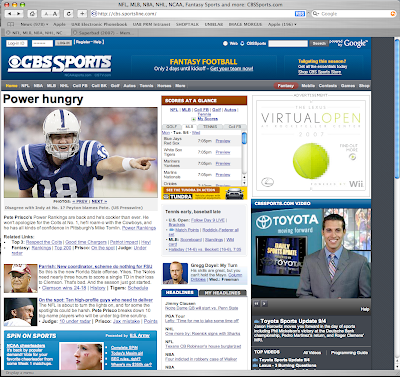 As for Clausen's potential on the field, I'll simply defer to the advice of T. Kyle King: "You don't bring a knife to a gunfight and you don't start a Clausen in place of a quarterback."

· Most of the presidential-candidate debates on both the Republican and Democratic sides have been pretty blah up to know, but I can't wait for this one. Correction: I can't fucking wait for this one. I'm sure that pandering to the nutso right-wing evangelicals is going to be just the ticket for Republicans seeking to broaden their appeal to pissed-off independents. (Hat tip: Atrios.)

· Even if you don't follow football, and I understand that not all of you do, this is hilarious, and a hell of a lot more interesting than the actual Heisman race. Number one with a bullet in the Lowsman race is poor Michael Henig, to whom, round about his fifth pick (of six) against LSU last week, I just wanted to give a hug.

Sure, he was going against LSU, one of the best defenses in college football, but that’s no excuse for throwing six interceptions. Colt Brennan probably won’t have 6 INTs all year. I found out this little nugget, using mathematics, Henig’s six interceptions were returned for 120 yards, matching his total yards passing. That’s a difficult thing to do, and I’m going to go ahead and say he’s the only person to throw exactly as many yards to the other team as he did his own.

· Last but not least, this week's Fleabomb SEC picks are up here. And I'm picking Auburn and LSU to get punked. Your thoughts?
Posted by Astronaut Mike Dexter at 7:58 AM

Ambivalent on Auburn's chances, but LSU is certainly going to be dethroned. They've certainly been given far too much WWL-cred this week.

I realize that this is probably just that I'm a chick, but the first thing I noticed about the Auburn Pasties photo was that girl's implants are seriously uneven. She should sue her surgeon.

Sorry, but no way LSU loses against Va Tech. I agree that they're gonna lose a game they shouldn't, but it won't be to Va Tech. Sean Glennon will throw under too much pressure & is good for at least 2 picks, minimum. He'll put the D in a bad position and by the 4th it will be all over. That kid cannot handle what LSU is gonna give him. And he absolutely cannot handle what the LSU crowd is gonna give him.
Love the blog! Go Dawgs!

Ohio State shouldn't be too happy about App. State. That's the kind of turn of events that could get Carr fired; then OSU might have to contend with a real coach. And if there is a UGA girl that wears the pasties, I hope hers are real.

I checked with my wife and she pretty much confirmed that using phrases like "Not with all the sugarcane I'm carrying in my backyard -- that thing is sweet" probably has more to do with why you aren't in a relationship than any other single factor. Jes' sayin'.

Does anyone actually know who that chick is? I got that image on email months ago—whoever the hell she is, she is getting some serious exposure. No pun intended.