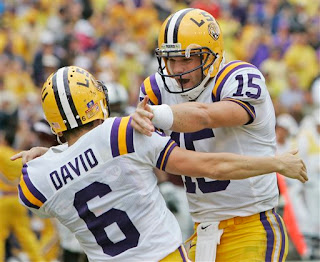 • I got some good comments in response to this post asking why the ball wasn't called down on LSU's fake-field-goal attempt against South Carolina last week. Ivan Maisel addressed the question directly in his "I-Formation" column this week, and obtained what I guess we can call the definitive answer from the NCAA:

Fake field goals are the only plays in which a passer may throw from one knee. A reader inquired why the ball is not dead. The rule dates to 1955, when Columbia coach Lou Little, speaking for the American Football Coaches Association petitioned the NCAA Rules Committee for the ball to remain alive in the holder's hands.

The coaches, according to NCAA rules secretary-editor John Adams, said, "We want to have a fake field goal. We don't want the holder standing up. That gives it away."

The committee passed the rule, and tweaked the language in 1985 to make it clear that the holder may pass from the kneeling position.

That, incidentally, also marked the last time the NCAA "tweaked" a football rule for the better.

• As for that other football controversy -- Oklahoma State coach Mike Gundy's anti-media rant last weekend -- I had some post planned about how it was awfully convenient that so many columnists are lining up to tut-tut about what a naughty, naughty boy Gundy is, but I'm already bored with the whole thing, and plus there's nothing I could possibly say that would top Sunday Morning Quarterback's take from yesterday.

So I'll simply say this: The greatest postgame coach's rant in history is still Jim Mora's "diddly-poo" tirade from back when he was coaching the Saints, and it's not even close. Yes, it's even better than his "Playoffs?!?" rant from his stint with the Colts a few years later, because of the range of emotion: You actually see Mora's condition devolving right before your eyes. At the beginning of the Saints rant, Mora's trying to censor himself -- that's where the "diddly-poo" comes from -- but by the end of it, he's gone ahead and let loose with "horseshit." In that rant, the realization finally dawns upon Mora that his career with the Saints is more or less over, so why not bust out with some profanity, he's got nothing to lose. And you witness this epiphany occurring right in front of you. It's a truly powerful moment in sports history; Mike Gundy should be so lucky to have a moment like that if his career ever really hits the skids in Stillwater.

• This video, which I first saw at Orson's site toward the end of last week, seems to be making the rounds of the Internet as the new oh-shit-look-at-this viral video du jour (weak of stomach, exercise caution):

Sorry, Kid Who Got Tasered In Front Of John Kerry, your 15 minutes have expired. Swedish Lady Who Booted On Live TV, you're up!

Anyway, for some reason -- the Scandinavian language, perhaps, or maybe the fact that I still had "The Terrier Song" on the brain -- my memory was jogged of this "Kids in the Hall" sketch from back in the day.

• It's a big music month coming up for me: The Pet Shop Boys and Underworld both have new albums coming out in the first couple weeks of October. I'm just warning you about this now, because you will be hearing about them again before too long.

• And finally, I don't think I even need to describe how awesome this is; thus I submit it without comment. 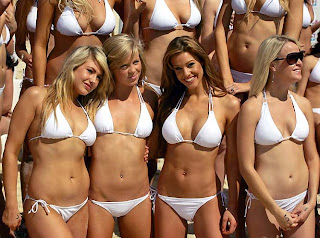 You. Hey, you. The one in white. No, the otherone.
Posted by Astronaut Mike Dexter at 1:44 PM

please don't sell the jim more "playoffs?!" rant short. it has been years and i still can't say the word "playoffs" without doing in my best jim mora voice.

This just gives me yet another reason to consider Australia as a better alternative to Canada in case the unthinkable happens and Rudy/Mitt/Fred/Insert other rich, white, racist male gets elected in '08.
Now if only the plane tickets weren't so damn expensive so I could at least go visit before the ozone-depleted sun fries the skin of these ladies, making them look like Magda from There's Something About Mary...

senor doug,
i know you heard of/saw the blog secpoon and know that its invite only now. what the hell man! can you do something about this, or at the very least get me an invite? i mean we use to be friends back in the good old uga days.
C