Thursday Mystery Meat is not a cheer-ocracy.

• Earlier this week I related a woeful tale of cockblocking that "begs to have a country song written about it." On Thursday, my homey, my ace, my slice, my ace boon coon T. Kyle King wrote the song.

A homeless lady cramped my style
And it hurt too much to laugh.
I couldn't get untracked; I was down
By four touchdowns at the half.

I couldn't win for losing.
I lost my shot with a beauty queen.
It never crossed my mind that I'd fall so far behind
And lose 35-14.

Ah, it feels good to laugh again. My sister said she tried to write such a song herself -- "AIDS Walk Cock Block," to the tune of "Honky Tonk Badonkadonk" -- but couldn't make it work.

• Earlier this month NFL commissioner Roger Goodell restricted the areas where cheerleaders are allowed to do their warmup stretching, saying that the girls are a distraction to the players. Which sounded stupid to me, but apparently Michael Strahan -- who's had the opportunity to ogle plenty of cheerleaders over the course of a 15-year career -- says Goodell might be on to something:

"The cheerleaders are a huge, huge distraction," he writes. "They aren't there just to distract the fans, they're used as a weapon against us, too. We stare at cheerleaders sometimes. It's against the rules for a cheerleader to date a player, but it happens all the time."

And whose cheerleaders are the most distracting? Not the Dallas Cowboys', not the San Diego Chargers' (Hey Jenny Slater's official Most Underrated Cheerleaders of the NFL), but my very own Washington Redskins':

"I'll tell you the best girls in the league, by far, are not the famous Dallas Cowboys cheerleaders or the famed Raiderettes. It's not even close, folks. The Washington Redskins get the prize in my book. Every single one of those girls is stunning." 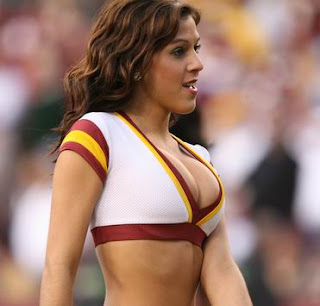 At this point, I'm pretty much proceeding under the assumption that nobody's actually reading any of this. Poop! Monkey butt!

• Speaking of cheerleaders, it's time for a Cheerleader Curse Update: After the power of the curse sent previously undefeated Oklahoma to a stunning upset loss to Colorado, the curse took a week off -- the next Cheerleader of the Week, Kelsi Metzler of Oregon, didn't have anything to do on Saturday except sit around, do her nails, and enjoy the Ducks' bye week (oh, and possibly revel in USC's loss to Stanford). This week, Oregon hosts Washington State, so we'll get to see if the Cheerleader Curse has hangover effects that can last through a bye. Even if they don't, this week's CotW is Holly Donaldson of North Carolina, so expect the Tarheels to get smacked by the Gamecocks on Saturday. 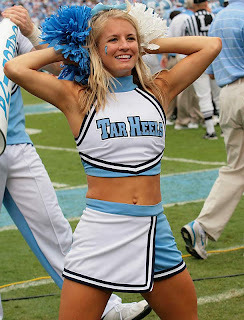 About to get 'Cock-blocked too, only in a completely different way.

• On that note, this week's SEC predictions are up over at Fleabomb.com. I'm predicting a 31-16 South Carolina win, FYI.

• As for North Carolina's ACC stablemate Georgia Tech, somehow I completely missed the fact that they're going up against Miami (and their former offensive coordinator, Patrick Nix) this weekend. But apparently I wasn't the only one.

• Hey, remember a few months ago when I expressed concern that Victoria Beckham was not a human at all but rather "some advanced humanoid that was grown in a lab"? 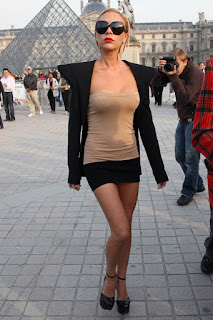 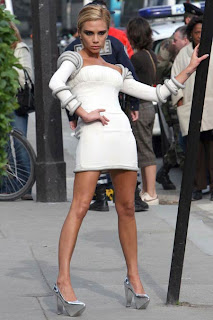 Well, I may have whiffed on warning you guys about her superhumanly strong titanium nipples, but I think the rest of it I pretty much nailed.
Posted by Astronaut Mike Dexter at 7:52 PM

Don't worry, I did in fact read the words Poop! Monkey Butt!! but only after seeing those cheerleader tushies.

That's hilarious, considering Strahan is 100% all-American homosexual. Gay as Richard Simmons and Lance Bass sucking opposite ends of a rainbow-colored banana. But gayer.

So I am guessing the 'Skins have some kind of bonus program for their cheerleaders, kind of like how Chic-fil-a employees can get tution help at Berry College, the Washington girls can get money for implants.

holy lord. the things i would do to that 'skins cheerleader on the upper right. DAYUM!!!