Yes, I'm taking an Arabic class at UAB this semester and I'm just showing off, but anyway, that's the Arabic word "fatwa," and I'm calling one out on the ass crater who committed this: 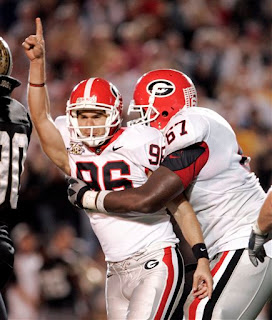 A few hours after he kicked the game-winning field goal in Georgia's 20-17 win over Vanderbilt on Saturday, Georgia placekicker Brandon Coutu's emotions went from pure elation to frustration and disappointment.

The house where the senior lives with two other University of Georgia students in Athens was broken into and burglarized this weekend, resulting in thousands of dollars worth of items damaged and stolen.

The break-in occurred sometime between 12:50 p.m. Friday and 11 p.m. Saturday, Athens-Clarke police said, when someone forced entry into the house on Davis Street by kicking in a back door.

The house was left ransacked, with several pieces of furniture turned over and broken, and items strewn throughout the house.

Among the items stolen were a flat-screen TV, a laptop computer, an iPod and three hunting rifles.

Finding his home vandalized and robbed by burglars was especially difficult to take, Coutu said, coming on the heels of one of his biggest moments as a Bulldog. In Saturday's game, Coutu kicked the first game-winning field goal of his collegiate career, converting a 37-yard kick as time expired.

Some of his SEC Championship and bowl game gifts were taken, he said, and just about every piece of furniture in his room was broken.

However, he was relieved to find his 2005 SEC Championship ring and much of his personal memorabilia wasn't taken.

One of the toughest things Coutu will have to do is explain the break-in to his professors, he said. The burglars stole a bookbag containing several pieces of schoolwork.

I issue this call to Bulldog fans or, hell, law-abiding citizens in general: Find whoever did this so that we can beat him senseless at midfield during halftime of the Homecoming game against Troy in three weeks. And if the perp was, as Quinton McDawg surmised, a Vanderbilt fan, then I think that's grounds for NCAA sanctions. Plus we get to go back up to Nashville and jump on their logo some more.
Posted by Astronaut Mike Dexter at 8:05 AM

Email ThisBlogThis!Share to TwitterShare to FacebookShare to Pinterest
Labels: georgia bulldogs, you know what I blame this on the breakdown of? society

I walked out to my car this morning to find my window busted and my iPod gone. After that and reading about this, I'm really getting close to going Charlie Bronson on the whole damn neighborhood.

Surely a Vanderbilt alum would have remained in his sedan chair and directed several hoodlums to complete the nefarious task? I doubt that they would be so hands-on.

Josh, it was probably Vandy fans (talk about paranoia, Doug!)

Vandy fans don't burgle, they embezzle, then donate a portion of the proceeds to Sen Corker. Just ask the folks that did business with Bob McLean. (Local Nashvegas investment dude.)

Sucks for Coutu. My apartment in Athens got burglarized, and it sucked. (If you live in Shoal Creek, get out of there while you still have your life!)

Crappy way to cap off a crappy win.

Ah, but wouldn't it have sucked even more if he had not made the field goal and we ended up losing?
Not saying he should be happy, but the glass-half-full part of me says that things could be worse....

I always thought Callahan had a more Billy Baldwin vibe.

While we're after these perps, can you guys also help me track down the folks who broke into my house the other week? I don't live in Athens, but it sounds like the same MO: kicked-in back door - check, stolen flat screen TV and computer - check. No stolen iPod or hunting rifles, but they did get my digital camera and three bottles of liquor. Bastards.

You sure this isn't just an elaborate "the dog ate my homework" scenario?