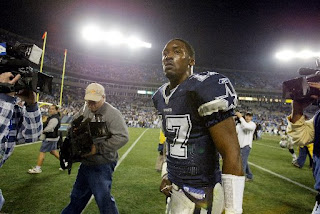 Who could've predicted this wouldn't work out?

This might only be amusing to Georgia fans of a certain vintage, but a fellow alum sent me this story a little while back about Jerry Jones, how he's this kickass maverick owner of the Cowboys who has turned his team into a golden-egg-laying contender again and who craps pure excellence, and obviously as a Redskins fan I think this is all bullshit but I couldn't help but laugh about this part:

He looks for football talent the same wildcat way he sought oil.

"We're a franchise of risk-taking," said Jones, who celebrated Friday the 18th anniversary of his best deal, the Herschel Walker heist with Minnesota.

"When we haven't had success is when those risks don't pay off. Quincy Carter is a perfect example. If you really pinpoint it, all of [the struggles this decade] started with the Quincy Carter business."

Eager to make a quick transition from Aikman to a new era, Jones gambled that he could get first-round quality out of Carter's third-round talent. Splitting the difference, he drafted the quarterback in the second round.

I can just hear the rest of the Cowboys' front office muttering to themselves: "What you mean we, white man?" To read Jones's comments, you'd almost think that a) the decision to draft Quincy Carter came from the front office as a whole, when in fact it was Jones's alone, and b) that nobody had warned Jones about what a bust Carter would be, when in fact the exact number was "everybody."

Seriously, Jer could've asked anybody in the state of Georgia about Lavonya Quintelle Carter and would've gotten the same answer -- that way lies only madness, pal. And then maybe, at the very least, he would've hedged his bets with backups a little bit more stable than Chad Hutchinson and Ryan Leaf. But hey, it was still a fun ride, wasn't it? Tune in for the sequel to this article five years from now, when Jerry claims that Terrell Owens's selfishness took him completely by surprise.
Posted by Astronaut Mike Dexter at 8:04 AM

Thanks for the terrible reminder of a terrible time in Georgia football history. Whenever I see Jim Donnan on ESPN, I think of the time he left QC in after 5 picks in the Carolina game. The Quincthy Carter fiasco is one of those times that the Tech-mites got the best of us. What would life be like had Quincy played at the trade-school?

My brother pointed out last night, "You know Donnan wasn't that bad of a coach. He managed to win all of those games with a bi-polar QB with a drug problem. That's not too shabby."