BlogPoll roundtable #5: We might as well be flipping coins. 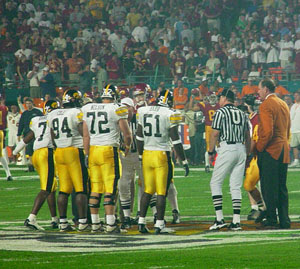 Everybody cool with it if we just decide the game this way, too? I mean, we might as well.

This season has been backloaded with shocking upsets, out-of-left-field performances and former also-rans jumping up out of nowhere to become contenders; few have felt this more acutely than Joey of the blog Straight Bangin', who has watched his Michigan team get embarrassed on their home field by Appalachian State and Oregon but then turn around and lay waste to Penn State and Purdue. Now the self-loathing Wolverine tries to make sense of it all by hosting this week's roundtable. Crank that soulja boy indeed:

1. Coming into the season, many people had October 6th circled on their calendars because it was thought that the LSU-Florida game would be the single match-up that wielded the most influence over the rest of the sport. Now that a singular cataclysm has given way to a weekly series of upheavals, is there a single remaining game that has the greatest potential to deliver on the promise of unique significance foretold in scripture the preseason blogosphere? Which one is it and why?

Well, the obvious answer here is Ohio State-Michigan, since both of those teams stand a reasonable chance of having ripped through a weak Big Ten by that point, which would make Ohio State an undefeated national-title favorite -- and the Wolverines a dangerous upstart looking to definitively drive the last nail in the coffin of the App State loss (and quite possibly send Lloyd Carr out a champion in the process).

But if you'll forgive me for going SEC-centric on you for a minute, I think the Florida-South Carolina game on November 10 will also have major implications not just for the conference title but for the national crystal-football-hoisting one. Spurrier's Gamecocks control their own destiny in the SEC East at that point and will probably be favored in every game up to that one; if Steve can beat his old team for the second time in three years, that would likely put the 'Cocks in the SEC championship game, and on a neutral field against an LSU team Spurrier has already had one chance to get a good look at, who knows what might happen? If Ohio State and South Florida get nailed somewhere along the line, it'd be really hard not to put a 12-1 South Carolina team in the Big One, which would signal the kind of seismic shift in the SEC that Gamecock fans have been doing voodoo chants for ever since Spurrier put on his first garnet-and-black visor. 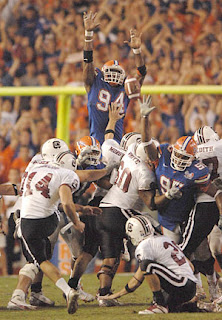 Somehow I don't see this happening two years in a row.

2. Bill Callahan's tenure has been so embarrassing for Nebraska fans that the school just fired the athletic director who hired him. Meanwhile, Tom Brady is doing just fine without Charlie Weis, even though he invented offense; Dream Coach Pete Carroll is facing criticism for his team's preparation and attitude; the Urban Meyer Revolution is televised but not as advertised due to an unreliable running game; Mack Brown's players get arrested a lot; and so forth. Don't get me started on Lloyd Carr. All around the country, coaches are under duress, even the beatified ones. Name a coach or two (or three) who most deserves the criticism and explain why.

I'm going to ignore the guys like Callahan and Dennis Franchione who are obviously toast at the end of the season, as well as the Karl Dorrells and Tommy Bowdens who are perpetually walking one tightrope or another. The first guy that the Evil Monkey in my closet points his accusatory finger at is Tom O'Brien. I guess I'll never know why he made the decidedly lateral move from Chestnut Hill to Raleigh, so I can only ask: Is the talent discrepancy between N.C. State and Boston College really so great that it explains a drop from 10-3 in your last year at BC to 1-5 (and no D-IA wins) with the Wolfpack? We all roll our eyes when a talented, qualified coach like Cutcliffe or Solich gets a premature axe from a dimbbulb AD, but maybe we need to come up for a new word for when a coach's ego prompts him to leave a great situation for pastures that don't turn out to be green at all. "Oh, man, it's starting to look like Jimbo Fisher really O'Briened himself by taking that Florida State job." Or something like that. 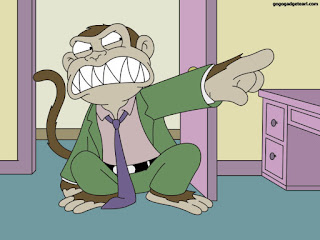 Don't think that Evil Monkey missed the fact that you dumped the Eagles for a team in your own division, sir!

Next car in the condemnation parade belongs to Weis. Yeah, yeah, I know, everything bad that has ever happened or ever will happen to the Fighting Irish is Ty Willingham's fault. But seriously, Chuck, you've now rotated three recruiting classes into your system, and you've got an offensive line that, if not exactly experience-heavy, is nonetheless packed with highly touted players. This is the best you could do with all that? Or maybe a 1-6 start is just an integral part of your fiendishly clever plan to take over Division I-A? (Actually, there may be a few Domers out there who believe that.)

And, of course, being a fan in the SEC, I am contractually obligated to do some grumbling about my own coach, but I think I've said my piece on that one and don't really care to revisit it again.

3. With few elite teams, a plethora of pretenders, and the aforementioned steady procession of upsets, filling out a ballot each week can be challenging. What is the single hardest decision you'll have to make this week when voting?

So many teams are hovering between "elite" and "pretender" status because they've been so schizophrenic over the course of the season. Like, I put Auburn at #10 in my last ballot, but is that the Auburn team that jumped on Florida early or the Auburn team that found a way to lose to Mississippi State at home? Which Tennessee team is actually sitting at #15 right now, the one that stomped all over my Bulldogs on October 6 or the one that got face-raped by Florida three weeks before that? By the same token, is #23 too low for a Virginia Tech team currently riding a five-game winning streak, or too high for a team that got a six-touchdown brass-knuckling from LSU? When you talk about "elites" and "pretenders" this season, you're not just talking about teams, you're talking about individual performances, and voting decisions are frequently based on rolling the dice and deciding which of those performances was the real deal.

4. This one is similar to the last question: many teams have sent voters mixed signals all year. Is BC really a top-five team? What am I supposed to do with South Carolina? Are there even two good teams in the Big Ten? Borrow a page from EDSBS and give me two teams to buy and two teams to sell. 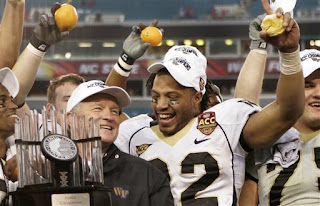 OK, this is awesome and everything, but can you believe some of the stiffs in our conference?

I'm putting in a buy order for a hundred shares of Wake Forest, for starters. I know most of us patted them on the head last year, dismissed their improbable ACC title run as "cute," and assumed there was no way in hell it'd happen again, but after solid performances against Maryland and FSU, none of the remaining teams on their schedule look unbeatable. And who knows -- if they run the table and Boston College stumbles anywhere along the line, Wake is booking return tickets to Jacksonville.

Also buying: Texas Tech. Their offense, obviously, is nuclear-powered, but If their last three games are any indication, they might actually be learning to play a little defense. They have to end the season at Texas and at home against Oklahoma, but honestly, the way this season has gone, do you really want to count them out of either of those games already? My bet is that they win at least one.

(And even though I can see Joey running in slow motion and yelling "Nooooooo!" already -- or maybe he's just rolling his eyes and making the jerk-off gesture -- I'm saving some pennies on the side to buy Michigan, too. This team has gotten into just enough of a groove to be very dangerous -- and murder on the rest of the Big 10 -- if they've decided to make October/November '07 the Big Blue Redemption Tour.)

Selling: two "V" teams, Vanderbilt and -- sorry, dad -- Virginia. Despite the hype, I wasn't completely sold on Vandy as a bowl contender in the preseason, and though their 3-1 start did intrigue me a little, they’ve since been blown off the field by Auburn and lost to Georgia in a fashion every bit as heartbreaking and inexplicable as the uncompetitive Commodore squads of old. Maybe next year, guys. Meanwhile, Virginia's won six in a row since their season-opening embarrassment in Laramie, which should have me pretty impressed, but look closer -- that streak has been built on last-second field goals against teams like North Carolina and MTSU. That's not going to cut it against the Wakes and Virginia Techs of the world; the 'Hoos could still finish with eight wins, but I'd be shocked if it was any more than that.

5. Now that we know the strengths and weaknesses of many teams, explain to me how your team will make out over the remainder of the regular season.

Are you kidding me? The way this season has shaken out? I was talking with my mom on the phone earlier today and commiserating with her on how the Tennessee and Vanderbilt games had gone, and I told her that Georgia could very well win all five remaining games on their schedule -- Florida, Troy, Auburn, Kentucky, at Georgia Tech -- or lose all five of them. There's not a single gimme left on the slate, but neither are there any games in which a Georgia win would come as a cardiac-arrest-inducing shock. 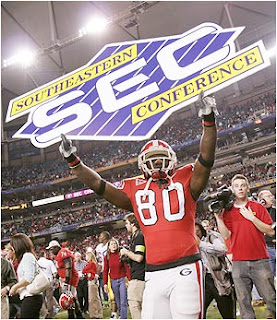 Now, a repeat of this? Then you can go ahead and bust out the defibrillator.

I may end up paying for this big-time -- I certainly did when I predicted solid wins over South Carolina and Tennessee -- but I think the Bulldogs win ugly against Troy and Georgia Tech and then pull an upset in one of the other three. And as crazy as it sounds, I think that upset is most likely to come against Florida next week. If everything were to play out that way, Georgia would finish at 8-4 overall and 4-4 in conference, which might be good enough for the Music City Bowl and . . . a ninth win against a crap ACC team? A 9-4 finish wouldn't represent an improvement over last year, which would be disappointing, but after the last few weeks, I’ll take it.
Posted by Astronaut Mike Dexter at 10:43 PM

Email ThisBlogThis!Share to TwitterShare to FacebookShare to Pinterest
Labels: Blogpoll, blogs that are better than mine, football, georgia bulldogs, roundtable