Orange you excited?: The UGA-UT roundtable.

Yes, ladies and germs, it's Georgia-Tennessee weekend, meaning that my favorite team is about to face one of only three teams over whom I might root for Osama bin Laden and the al-Qaeda All-Stars. Yet somehow, even a program as odious as Tennessee's somehow dumb-lucked their way into some halfway decent fans -- I'm referring, of course, to the guys at Rocky Top Talk, who were kind enough to volunteer (I kill myself!) to participate in a Dawg-Vol roundtable concerning the upcoming game. My pulled-out-of-my-ass answers to their questions about the Dawgs can be found here; their rather more insightful answers to my questions are as follows:

1. What were the general expectations in Knoxville for the Vols' 2007 season? Given the difficulty of the schedule they've played, is this one of those "better than the record indicates" kind of situations, or is .500 pretty much an accurate indication of the kind of team they are at the moment?

Vol fans ran the gamut on this question pre-season, but most (30%) predicted we'd go 10-2. Woo! Twenty-two percent thought we'd go 9-3. Woo. These predictions were based on (1) a belief in Erik Ainge and a passel of wicked fast young receivers, (2) spiriting pre-season reports that the running game was vastly improved!, and (3) a collective belief that the linebackers were great, the defensive line was, um, better, and that All-SEC senior safety Jonathan Hefney could teach an inexperienced secondary everything they needed to know to succeed in the SEC early enough to make a difference.

Hmm. Four games in, it's looking like only Ainge has met expectations. He's in command of the offense, checking off at the line to get the team into the right plays and out of the wrong ones. He's throwing with almost lethal accuracy to a group of heretofore inexperienced receivers, and he's doing it all with a broken pinky finger. So yay.

We're basically playing with three possession receivers, and while they've been stretching the field a little bit, like a phonebook-thick rubber band, they're still having trouble getting behind the secondary, and we've not really been able to work the jets into the rotation. Since we're in the midst of an elastic metaphor, let's say those guys are like unbound balloons, shooting all over the field in random and exciting directions. "Ethel, d'ja see them youngins? They sure can get in the wrong place in a hurry, cain't they?"

Add to that the fact that our offensive line isn't run-blocking very well, Arian Foster is proving to be merely pedestrian, our linebackers (and the rest of our defense) are still learning how to tackle, our defensive line looks remarkably similar to last year's line, and Jonathan Hefney has disappointed, and we've got trouble.

Still, our only two losses are away games to No. 3 Cal and No. 9 Florida (BlogPoll numbers), and, yeah, our record is better than it looks. The problem isn't so much those losses, but the weaknesses that those losses exposed. Bottom line, I don't think we're .500, but we'll be fortunate to get 9-3. We're probably looking at 8-4 or so. Not woo.

2. With only one returning starter in the secondary, the Vols' pass defense was generally assumed to be a potential weakness this season, but from what I gather the front seven hasn't performed all that well either despite having plenty of talent. At the risk of sounding like Seinfeld, what's the deal with those guys, and what are their prospects for improving? 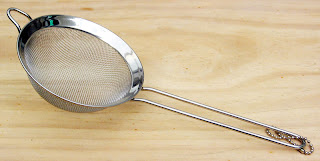 I'm not so sure about the talent thing. We have some, but we have no Glenn Dorseys or Derrick Harveys. The linebackers, except perhaps for Rico McCoy, have been the biggest disappointment so far, primarily due to the fact that it's really the only unit we expected to play really well. Our tackles and ends are getting pushed around on running plays, but they did show a bit of improvement in pressuring the quarterback against Arkansas State. Prospects for continued improvement? Decent, but not as much as we need because we have too far to go. The secondary, by the way, is coming together (I may have the minority view on this among Vol fans), and we should see relatively dramatic improvement from them over the next several games.

3. Tennessee has a pretty deep stable of RBs this year, but none of them appear to have stepped up to become The Man just yet. Which one do you think presents the biggest threat to Georgia's defense?

LaMarcus Coker, no doubt. Arian Foster is good, and he has deceptive speed in that when you see him running, he's going a lot faster than you think he is. Think Matt Jones; defenders are liable to misjudge him and let him get right past them. Once they get a bead on him, though, they'll be able to catch him from that point on.

They can't catch LaMarcus Coker, though. He's both quick enough to get around you and fast enough to leave you in the dust, and he's getting back into the swing of things after a suspension for much of pre-season camp and the first game against Cal. Watch out, too, for true freshman Lennon Creer, who seems to have Foster's power and vision, and Coker's speed and quickness. He's a keeper. 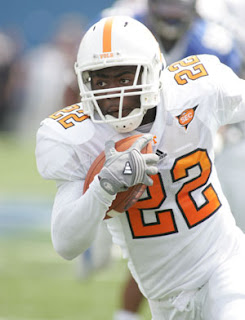 I'll be laying waste to one of these double-deuces on Saturday, but it's up to the Dawgs' front seven to handle the other.

4. What do you see as being the most favorable matchup for Tennessee on Saturday? Which one has you the most worried?

Most favorable for us is Ainge versus Georgia's pass defense. Our passing offense is 22nd in the nation and 1st in the SEC. Yes, even better than Kentucky's Andre Woodson, who hasn't played either Cal or Florida. The Bulldogs' pass defense is 7th in the SEC, so that has to be our biggest advantage.

Most favorable for you is any play, excluding field goals and PATs, involving a foot. We have an excellent punter and an excellent kicker, but unless they can force a fair catch or a touchback, chances are the guy catching and running won't be touched until he's tackled in the end zone by his own players. We're 91st in net punting (and 113th in the nation in punt returns to boot!). The kickoff coverage numbers are a lot better, but kickoffs are still quite frightening.

5. The home team has lost the last four games in this series; Mark Richt's teams have performed very well on the road, particularly in Knoxville. How much does the concept of a "home-field disadvantage" factor into your thinking about this game?

I agree with Paul, who said earlier this week that a stadium is intimidating (or not) not because of what it is but because of who plays there. As you and I discussed earlier this summer, this series of late has been a heartbreaking one with many games being decided by horrid momentum swings, many of which have come at the other's place. A good stadium can be quite intimidating when a team is playing well, but it can have a huge counter-effect when scores of thousands of fans are in a collective state of shock.

6. The current scuttlebutt on Fulmer's job security runs the complete spectrum from "He's safe" to "He's gone if they don't win 10 games" even to "He's retiring after this season." Which do you think is closest to the truth? If Fulmer really is on the hot seat, what would it take for him to remain secure going into 2008?

The truth is almost certainly somewhere in the middle of those extremes. Win an SEC Championship this year, and he's probably safe for another five to eight years. Suffer another Season of Which We Do Not Speak, and he'll be gone when the last whistle blows this November. Most likely, he has another two, maybe three, years of 8-4s left. 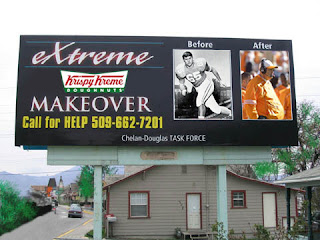 No, it's not nice, but no one ever said this was a friendly business.

7. Finally, if you could steal one thing about Georgia's program or tradition and make it Tennessee's -- a player, a coach, a famous alum, something about Athens, whatever -- what would it be? Of course, if you think everything about Georgia sucks and you want no part of it, feel free to say so.

I love Mark Richt. Great coach, great guy, impossible to hate, and I hate him for it. Loved his involvement in "Facing the Giants," and I think he's done just terrific things for the program there. So, I'll take all of him and a side of your recruiting base, please.

(Joel from Rocky Top Talk and Andy from the UT blog Corn From a Jar also did Q&As with Georgia Sports Blog's Paul Westerdawg; Andy's responses to Paul's questions are here, and Joel's are here.)
Posted by Astronaut Mike Dexter at 7:31 PM