The Friday Random Ten+5 is not impressed.

You probably already have enough reason to question the integrity of some of my thought processes, but if not, here are some more: Five Things Apparently Everybody Likes But Me. 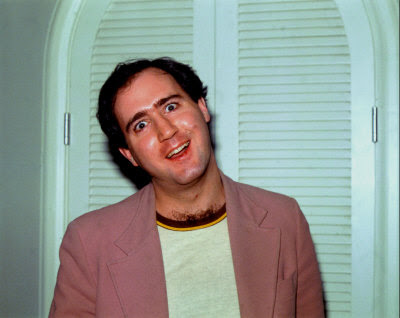 Andy Kaufman
Sorry, I know people find him almost universally hilarious, but there are not enough drugs in the world to make Andy Kaufman funny to me. I can give him a chuckle or two when he's playing Latka on "Taxi," but his stand-up isn't even the least bit amusing. Whenever I hear people describe him as a "genius" or an "innovator," I get the same confused, scrunched-up look on my face that I got back in 2003 when people were describing George W. Bush as a hero. 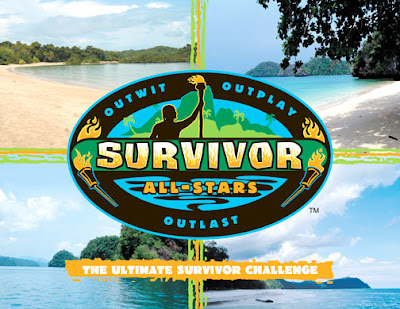 "Survivor"
I've only seen maybe 10 minutes' worth of this program over the course of its entire run, and even that was only by accident -- I was flipping through channels after the Super Bowl a couple years ago or something. But anyway, it just doesn't appeal to me. The reality-show trend as a whole has kind of flown right by me -- I was a huge fan of "The Amazing Race" for a while, and that's pretty much it -- but even so, if I wanted to watch groups of random assholes compete in canoe-racing or fire-building challenges, I'd go become a counselor at a summer camp. And no, skinny chicks in mud-covered bikinis don't turn me on. 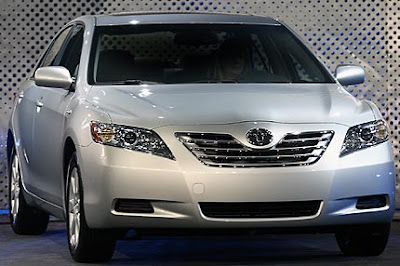 The Toyota Camry
Just because something is the best-selling of its kind in America doesn't make it good. My dad first bought a Camry in 1992, and that was kind of a nice car, but then, in spite of much better options, he bought another one in 1997. And when he began his latest round of car-shopping this past summer, he said he'd probably go out and buy another one, but then we drove one: Yes, it's quiet and refined and it rides well, but it's also big and floaty on the road -- like a Japanese Buick -- and it just feels cheap and plasticky inside; even the new-car smell is appliance-like. Pops put the Camry at the bottom of his list, and if you've designed a car that's too boring for even my dad to enjoy, then you've really accomplished something. (Not only did he end up buying an Acura TL, but it's red, which for my dad is the equivalent of wearing a Hawaiian shirt and a sombrero to a board meeting.) 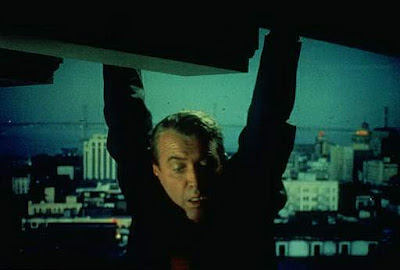 Alfred Hitchcock's "Vertigo"
Supposedly this is Hitchcock's masterpiece, but nothing about this movie rang true to me. It seemed over-the-top and contrived in a lot of parts, and the characters were barely plausible -- the calmness with which Kim Novak's character seems to tolerate Jimmy Stewart's increasing insanity just didn't seem real at all. "North By Northwest" has it beat by a mile. 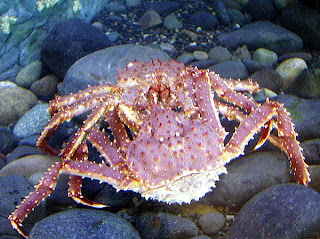 Crab
The crab cakes they have every Thursday at Chez Fon Fon right around the block from me are fantastic, but other than that, I've never found crab meat anything other than just plain gross. The only time I ever did the hide-food-in-the-napkin trick as a child was during family gatherings on Christmas Eve -- it's a tradition in some Catholic circles to eat seafood for Christmas Eve dinner (yeah, we've got this weird thing for seafood, I really don't know what the deal is), and the mere smell of crab casserole wafting in from the kitchen was enough to make my stomach flop over a bit. I hated fish when I was a kid, too, and I'm gradually starting to come around on that, but if I haven't gotten to like crab by now, I probably never will. (Oddly enough, I find Old Bay crab seasoning to be awesome. I hardly ever make a Bloody Mary without it.)

Now that your respect for me is at an even lower level than it was before, here's the Ten:

Your own Random Tens and/or "sorry, just don't get it" confessions are welcome in the comments, as usual.
Posted by Astronaut Mike Dexter at 7:37 AM

Agreed on "Vertigo", although I don't think any film scholar would ever consider that Hitchcock's masterpiece.

Diasgreed on crab, which is the bomb. And by the way, Old Bay is not a crab seasoning; it is a "put on anything edible" seasoning and might be the best invention to come from Maryland besides the refrigerator.

Fwiw, seafood at Christmas isn't especially Catholic as it is Mediterranean/Italian. Okay, Gillett doesn't sound Italian, but my Dutch mother never heard of such - and the Dutch eat raw herring at stalls like they were hot dogs. But anyway, crab is the bomb.

Pretty sure I'm the only person alive who doesn't think Steve Carell is funny. It's ironic that he worked at an electronics store in the 40 Year Old Virgin, since he looks just like the guy who manages my local Circuit City. Only thing is, Frank down at CC is funnier.

I'm with you on the Camry and Crab things though.. spot on.

The decidedly rock-centric iPod 10 are as thus:

"Vertigo" was the highest-ranking Hitchcock film on the AFI's latest top 100 list, so while I'm not sure "film scholars" think of it so highly a lot of Hollywood-types obviously do. And for the record I agree with Doug wholeheartedly--it just ain't all that. Even "The Birds" at least has the OHDAMNTHISISSOMEWEIRDSH*T thing going, but Vertigo just seems slow and doesn't quite fit together in my humble opinion.

Agreed on A Kaufman- I feel exactly the same way.

I'm apparently the only straight dude out there who thinks that Angelina Jolie is nott hott.

Another thing that everybody likes but me: fantasy football.

Lastly, I may be the only UGA / Athens person who is really into music of all sorts with no particular affinity for B52s, REM, or Widespread Panic.

3. "Stars Shine Quitely" by Mason Jennings, from 'Birds Flying Away'

4. "DOWN" by Dead Prez, from 'Revolutionary But Gangsta'

8. "She's Just A Freak" by Luniz, from 'Operation Stackola'

10. "Basher" by Slightly Stoopid, from 'Closer To The Sun'

If you approach Kaufman as a comic he sucks, but if you approach him as a guy that managed to get performance art on network tv he rocks. The time he played conga drums while drying his laundry on the stage of SNL is still one of the great sublime moments in TV.

Crab is best served raw, with avocado and maybe some cream cheese wrapped in rice an a strand of seaweed.

Hitchcocks best was North by Northwest, or Rear Window, or The Birds, or Psycho, or anything by M. Night Shyamalan other than that last one about the girl in the swimming pool...

Completely agree about Kaufman, Survivor, and the Camry. I have no opinion about Vertigo, never having seen it. Crab is okay in cake format, or if fresh from the waters off Washington state and I don't have to crack the bloody thing open myself.

One note in passing: Mrs DC Trojan put me further in karma debt to her, by listening to my sensible plan to get a used Accord or Camry to replace my old hoopty, and saying why not get something new that you might actually enjoy? One heavily discounted WRX wagon later...

Don't know why my iPod is so into ska today, but there you go.

Everyone in the world thinks that Fargo was a great "dark comedy" movie. I hated it. For the Coen brothers, give me Raising Arizona.

I kind of like Camrys and Snow Crab legs are the best. I'm boiling up a big potful for game watching tomorrow.

I just don't get the Julia Roberts love. She is a decent but not great actress, and pretty but not gorgeous.

Witches Promise by Jethro Tull
Happy Boy by Beat Farmers
White Trash with Money by Confederate Railroad
Psycho Killer by Talking Heads
Naked Women and Beer by Hank Williams, Jr.
Thick as a Brick by Jethro Tull
Roots Bloody Roots by Sepultura
Songs for Sonny Liston by Mark Knopfler
Peg and Pete and Me by Stan Ridgeway
Destroyer by Kinks

"North By Northwest" is one of the best movies ever made. Cary Grant is one of my heroes.

kanu: you are not along on Angelina Jolie. I don't get it either.

I'll only add one thing that seems to be me bucking the trend: Borat. Absolutely the worst, stupidest thing I've ever seen on film. Just pointless.

Also, and I know I said one, but what the hell... I don't get American Idol. I mean, really. How dumb is America? Ehhh... don't answer, I'd like to keep what little faith I have in Jefferson's common man alive between now and next November when it will inevitably be crushed.

So What - Miles Davis
Oh, Bury Me Not - Johnny Cash
My Old Faded Rose - Johnny Cash
I'll Come Knockin' - Lyle Lovett
All of Me - Willie Nelson
Shadows in a Mirror - Chris Isaak (how did that get in there?)
Steets that Time Walks - Son Volt
Don't Leave Me - The All-American Rejects (who are they and how did they get on my iPod?)
Voice of Harold - REM
Hot Texas Christmas Day - Dale Watson

I'm still not crazy about Kill Bill, Magnolia, or even (horrors, I know) Napoleon Dynamite. Just don't get 'em.

And my Ten are right here.

I am so torn right now - first you diss crab...only God's greatest creation other than the sun...and maybe life...but still up there...so I'm all prepared to drive to B-ham and throw a malatov cocktail through your window (hey, I'm from Maryland - I take my crab seriously, same with my "crabs") THEN you totally throw me for a loop and give props to one of the most unappreciated, unknown REM songs ever, "Walk Unafraid" - if you haven't heard a live version...do it, right now.

As for "Vertigo" I love it, but I love Jimmy Stewart - hell I could watch him in a Vertigo 3: The New Batch and still call it brilliant. But as far as best Hitchcock films - got to go with Rear Window or heck...you know what, I'll say it - Rope. Rope is great, filmed in "real time" using successive 8 minute segments - very cool...and Jimmy Stewart.

Solja Boy Crank That: Upside, got the crowd into the Ole Miss game. Downside, it is the Macarena of 2007

Craig James: For the love of God, just shut up. I didn't think he could possibly make better money at being bad at something than he did at SMU, but alas, I am wrong.

Grey's Anatomy: Any show that makes me avoid looking at Ellen Pompeo, Sandra Oh and Katherine Heigl at the same time has no possible merit.

Baked Potatoes: Why eat them baked when you can have them fried or even scattered, covered, smothered and topped?