BlogPoll roundtable #4: After everything went kablooey. 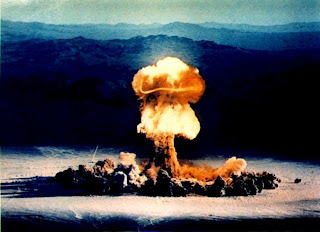 I gotta hand it to this week's roundtable host, My Opinion On Sports: Less than 48 hours removed from his Oklahoma Sooners getting punked by Colorado, he still mustered the will to come up with some questions and do the roundtable. As far as anyone knows, all his personal possessions are even intact. Clearly, then, a better man than I am.

The Battle for #1 -- USC and LSU are separated by one vote in the AP poll. We made the switch in last week’s blogpoll by putting the Tigers in our top spot. State your case for who should be the top team in the country.

It's a little harder making the case for LSU after they spent 30 minutes limpdicking around against Tulane, but whatever ass-chewing Les Miles did in the locker room at halftime paid off, as the Tigers outscored the Green Wave 24-0 after the break and could've piled on more if they hadn't called off the dogs late in the fourth quarter.

So I still think LSU is number one. USC's case for the top spot has been dinged by a steady stream of injuries, particularly to the offensive line, which lost OG Chilo Rachal against Washington on Saturday; they also haven't found a receiver yet who can truly step into the shoes of either Dwayne Jarrett or Steve Smith. LSU's defense is every beat SC's equal, if not better, but I believe they've got more playmakers on offense, and they're also versatile -- if you take away the pass, they'll just run it down your throat, and if Matt Flynn is hurt, no big deal, they'll just throw Ryan Perrilloux at you. An LSU-USC game on a neutral field would be thrilling for 60 minutes, no doubt, but I think LSU would win it. 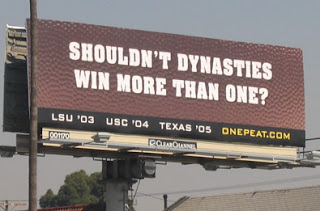 And then maybe they'll finally give this shit a rest.

Oklahoma, Florida, West Virginia, Texas and Rutgers were all upset this weekend. Of those teams, who has the best shot of getting back into the national title hunt?

Oklahoma, partly because, as I explained in my BlogPoll ballot, I think their upset loss was the "flukiest" of all the shockers that occurred on Saturday, in the sense that their performance was the most aberrant compared to the way they'd played earlier i the season. But I also think they're still the strongest team by a healthy margin in the Big XII. If they beat Texas in the Red River Shootout this weekend, which they should, they'll be right back on track for a second straight conference title; all of the good teams left on their schedule have to come to Norman, and while theoretically a Missouri or a Texas Tech might be good enough to knock off the Sooners, I think they got their wake-up call from Colorado and are much less likely to cough up a win in those games. If everyone else loses between now and December, or even if the BCS is looking for someone to go up against the last remaining undefeated team in the national title game, I think a 12-1, Big-XII-champion OU team would be a very attractive prospect.

Looking at the current AP Top 10, who is grossly overrated and who should be in there that isn’t? 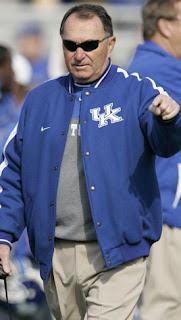 Bitches used to laugh at me, now they on my jock.

As far as the overrateds, I know I may have turned into a curmudgeon for curmudgeonry's sake here, but I still have a very hard time seeing Kentucky as the #8 team in the country. They're good, but the two games we thought were marquee wins at the time -- Louisville and Arkansas -- have lost a considerable amount of luster now that both those opponents have been proven to have very little mustard on defense. Also, Wisconsin may be 5-0, but what's their best performance so far? Doubling up on a mediocre Washington State team? Needing a late FG to get by Michigan State? That's not going to get them very far against Ohio State or Michigan, and it may not even get them all that far in Champaign this weekend.

Who isn't in the top 10 who should be? Honestly, probably no one. After last weekend's massacre, teams that looked truly top-10-worthy are looking scarcer than gay Muslims at the Republican National Convention. But I kinda have to take some pity on West Virginia; you've got to wonder if having Pat White for the second half might've been worth the single TD the Mountaineers eventually lost by. They didn't look well-prepared against USF, but with a full and healthy complement of playmakers, I'm convinced WVU is still good enough to beat 95 percent of the teams in the country.

What is the worst coaching mistake you’ve seen this season? 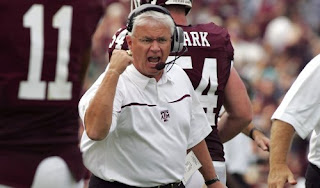 Dennis Franchione giving Jovorskie Lane only two carries against Miami. Let me make sure I've got this right, Fran -- your brilliant strategy of forcing QB Stephen McGee to provide every last shred of your offense isn't working, so at halftime you adjust by . . . continuing to pile the entire game on McGee's back? And you don't think your gigantic man-beast of a running back, the guy who scored 19 touchdowns for you last season, has anything to contribute? Orson is right: Franchione is a total fucking idiot. If he still has a job at the end of this season, you may take that as a sign that the A&M administration has finally given up on any hope of competing with Texas and Oklahoma on a regular basis.
Posted by Astronaut Mike Dexter at 9:19 PM

I pray the Dawgs whip the Vols so I can truly enjoy the Schadenfreudapalooza of watching Kentucky beat Sub Carolina and LSU dismantle Florida. Otherwise, I may just go to bed at 6 PM.

Good call on Franchione. He needs to get his head out of his ass or he's not even going to get hired as the defensive coordinator for the Hoover junior varsity team.

I keep hearing about SoCal's awesome defense being the best in college football. They are ranked 15th in Total D & 34th in Scoring D. Don't they still have the meat of their schedule to come? What am I missing here?