The Friday Random Ten+5 is taking it one day at a time.

As you've no doubt guessed from this blog, I'm still recovering from the hellacious beatdown Tennessee laid on my Bulldogs in Knoxville last week. But everybody's got their own way of recovering, and I've got mine. After a catastrophe like that, you've got to get through the five stages of grief one way or another, and this week's +5 discusses how I've made that particular journey: The Five Stages Of Dealing With A Humiliating Loss And How I Accomplish Them. 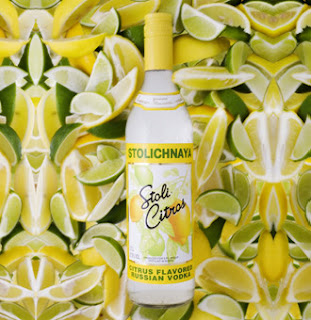 First stage: Denial
Stolichnaya vodka
This, of course, is the part where you try to deny that the embarrassing blowout is even happening. But some losses are easier to deny than others. "Brandon Cox didn't really just toss a 64-yard pass on fourth-and-10 to set Auburn up for the winning field goal," for instance, is a snap, but when your guys are down 28-0 at halftime to a team they should be rolling against, erasing that reality is going to require more than simply closing your eyes and reciting affirmations. Nope, you're gonna need to completely rearrange your consciousness, and nobody has perfected the art of escaping soul-crushing misery through alcohol like the Russians. You'll want to keep at least a fifth handy at all times, but the 1.75-liter handle bottle is even better. Don't get hung up on mixers, either. Orange juice? Look, if I wanted a fruit salad, I would've made myself a fruit salad. 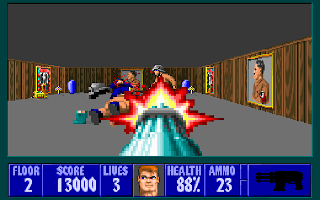 Second stage: Anger
Wolfenstein 3D
Now you're just taking your rage out on others, and when it comes to that, you can keep your fancy-ass XBoxes or "Doom 3" games -- give me a PC, 1992-vintage pixellated graphics, and mowing Nazis down with a Gatling gun. "Wolfenstein" basically pioneered the first-person-shooter genre of video games, and yes, you can still download it from any number of places on the Internet. And it makes for a richly satisfying way of venting your anger without actually killing anyone. Plus the people you're pumping full of lead are just Nazis, so you don't even feel guilty for being a sicko when you're done. 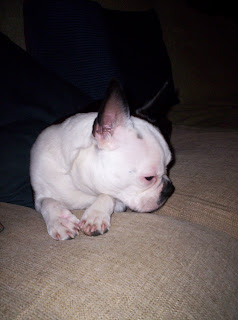 Third stafe: Bargaining
Boston terrier (or other pet)
Now you've started to recognize your powerlessness over the situation, and you're trying to make deals with God to keep such a miserable blowout from happening again. Some people in this situation would promise to be nicer people or treat their kids better, but I don't have any kids and being nice to other people is still a bit of a stretch for me, so I choose to seek validation and acceptance from my dog. Even if the football gods have abandoned you, a dog never will. 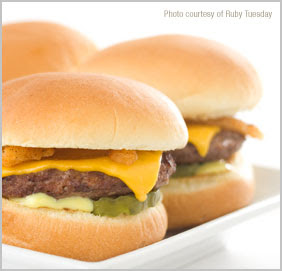 Fourth stage: Depression
Ruby Minis
Here's the part where you give into the temptation to sulk and be miserable. You need comfort food, and there are not many better choices out there than the little cheeseburgers they started offering at Ruby Tuesday a while back. When I describe these to people who are unfamiliar with the concept, they almost always say something like, "Oh, like Krystals?" No, they're nothing like Krystals -- they're basically shrunk-down versions of the full-size burgers Ruby Tuesday makes, and they have pickles and little fried-onion straws on them, and they are just the thing when you've given up hope and are looking to find solace in food. Actually, they're good for plenty of other situations as well, but bear with me here. (Also good: chicken fingers from Zaxby's or Guthrie's.) 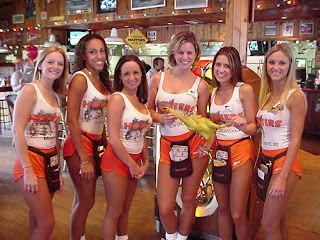 Fifth stage: Acceptance
Hooters
Eventually, you come to the grips with the fact that your team has received a 3-TD firebombing from a hated rival, you realize that the sun is still coming up and they still have another game the very next week, and you determine that your misery over one game isn't enough to overcome your football addiction. So you dust yourself off and make plans to watch the next game. You're still tender from being kicked in the crotch the previous week, though, so you can't take a full dose of pure, undiluted sports just yet; you need to ease back in and cut it with something else. Like chicken wings and boobs.

And now you're ready to go. Excelsior!

Your own Tens and/or methods for dealing with loss, even if it's just something minor like death or divorce, are welcome in the comments.
Posted by Astronaut Mike Dexter at 8:03 AM

Oh my. I actually consumed the Ruby Minis on Monday for lunch. That's kind of scary. I must say that I've found salvation towards the bottom of a bottle of Tanqueray as opposed to vodka, but to each his own.

My ways of dealing with a Gamecock loss:
Denial-Bourbon.
Anger-Bourbon, being kicked out of the bar, passing out on a friend's couch.
Bargaining-Pleading to various gods and goddesses to take away my hangover.
Depression-Sleep, xbox360.
Acceptance-Doing what I need to do on Mondays, ie, school, check my email/voicemail for taunts from friends.

Absolute and complete denial for 6 days, straight into liquid consolation the following Saturday. What loss? Where are my pants?

(Dave.. the first 3 letters of the word verification thing are 'GOP'.. amusing)

Coping out here in California is much, much easier, since barely anyone else is into CFB at all, so once you deal with it personally, you don't have to rehash your feelings everytime you see/talk to a friend, family member, co-worker, dude at the register of the gas station who recognizes your Super G hat and chats you up about WTF happened to your team. At the same time, it is frustrating that the sports minded people in the office only know about and want to talk NFL.

By the by Doug, I'm verrrry pleased to see that you have "Beats Rhymes and Life" by Tribe. I think it is their most underrated album and possibly even their best. Maybe not quite as great as Low End Theory, but pretty close for me, and always disappointed that people with only a passing knowledge of ATCQ don't know much about that record.

2. "Walk So Lonely" by St. Germain, from Mezzotinto

5. "The Whole World Lookin' At Me" by Busta Rhymes, from 'When Disaster Strikes'

7. "Flava In Ya Ear" by Craig Mack, from 'Project Funk Da World'

9. "Barrel House Blues" by Albert Cummings, from 'From The Heart'

1. It's Everything but Party Time - the Go-Go's
2. Join Together - the Who
3. You'll Miss Me - They Might Be Giants
4. (What's So Funny Bout)Peace, Love & Understanding - Elvis Costello
5. Eye of Fatima - Camper Van Beethoven
6. Runaway - Pulley
7. Orange Blossom Special - Johnny Cash
8. She's Funny That Way - Count Basie
9. Gin & Tonic Blues - the Reverend Horton Heat
10. Get It Out of Your Mind - Brian Setzer