Damn, I should've done this yesterday a.m. -- "Monday Morning Mystery Meat" just sounds funnier. But anyway, this is just a grab bag of too-short-to-waste-an-entire-post-on flotsam, including the Simpsons, right-wing turdwits, and . . . boobies!:

· For the two or three of you who still care, the college-football-teams-as-"Simpsons"-characters post has been updated again -- and given that I finally achieved my goal of cramming UAB in there, probably for the last time.

· This may seem like a suspect topic to discuss right after dredging up the "Simpsons" post again, but has any group of political pundits burned through its 15 minutes quicker and in more embarrassing fashion than the Bush groupies at Power Line? If you're not familiar with Power Line, they're the guys who debunked the "Mapes memo" that purported to prove Bush's non-service in the Alabama National Guard during Vietnam, thereby getting Dan Rather ushered out the door at CBS a few months earlier than planned. For this top-notch job of font dissection, they won Time's "Blog of the Year" award, and have pretty much coasted on it ever since -- between that award and their association with the world-class joke that is "Pajamas Media," they appear to fancy themselves hard-hitting journalists (though anybody who could write this with a straight face is no more engaged in serious journalism than, well, I am). It appears that the Power Tools finally went into the red on the Self-Parody-O-Meter this week in their lame attempt to grill Sen. Dick Durbin over the legality of Bush's secret wiretapping program. Durbin says he's never heard of Power Line or Pajamas Media, and the best the Power Line guy can clap back with is a sputtering "Dan Rather knows something about it!" Dude. You guys have become the conserva-blog equivalent of Scott Stapp, dredging up the one old hit nobody really cares about anymore to try and make yourselves look relevant (or pull some underage tail at a Denny's). Here you are squaring off with Dick Durbin, a guy who cried in front of the entire Senate last year, and he just pwn3d your ass.

· A Danish newspaper publishes an editorial cartoon depicting the prophet Muhammad. Muslims all over the globe go apeshit. An Iranian newspaper retaliates by soliciting cartoons making fun of the Holocaust. Congratulations, Islam, you've fallen hook, line, and sinker for a "You suck"/"No, you suck" sissyfight so lame I can remember witnessing ones exactly like it . . . back in the third grade. "He's gonna make a cartoon about me? Ooooh, I'm gonna make a cartoon about him!" Except it's especially stupid because they're making cartoons about Jews -- they're not even making cartoons about Denmark, who started this whole thing to begin with. Although I have to admit, aside from butter cookies, Hamlet or Helena Christensen, I can't think of anything Danish-specific to make fun of right off the top of my head. 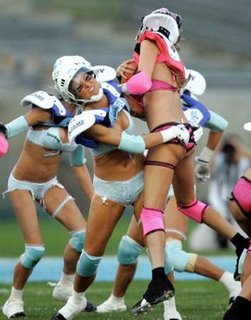 Yes, it's ridiculous, but that's still one more hit than Deion was ever willing to make.

· Look, I'm about as easily distracted by female T&A as any man currently living, but I still have to ask, is there anybody in America who honestly finds this sexy? "We're gonna have models in lingerie!" OK, I'm listenin'! "And they're gonna be wearing pads!" Uh . . . kinda weird, but OK . . . "And helmets!" Um . . . what? "And that black stuff that football players put under their eyes!" OK, I think we're officially done here. Who would actually pay thirty bucks for this? That's more than actual porn. Not to mention you can pay one-fifth that for this at your local Joe Muggs. Or to put it another way, given the choice between watching two hours of the Lingerie Bowl or fifteen minutes of "LCI Matin," I'm willing to read subtitles. 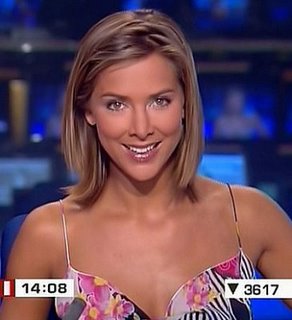 If Melissa Theuriau is taking the field, it could be the Burlap Sack Bowl and I'd still watch.

· On a random perusal through my referral log this morning, I found that the first 20 search-engine queries that brought people to this site included: "sisters naked"; "hot lesbians"; "hot whore"; "jenny and barbara Bush sexy"; "bikini chain gang naked"; "naked news videos"; "whore woman"; "hot lesbians"; "naked sisters"; "naked in shower"; "look my naked ass"; "koran fuck"; and "children pageant winner pictures." Is it bad that the last one was the one that creeped me out the most?

· And finally, for the interactive portion of Mystery Meat, which suit do we prefer: LSU signee Charles Deas, in an item from the Silky Johnston Signature Collection, or Tennessee men's basketball coach Bruce Pearl, wearing a one-of-a-kind creation called "Cône du Trafic" from Emporio Phillippe Fulmér? 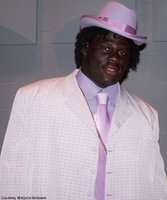 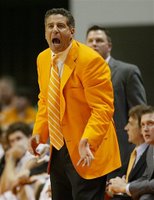 I am sorry - the lavender suit loses, big time! The cone du trafic is a bit much, but the little girls Easter outfit on that big dude is more than a bit much!

I don't know, usually the lighter colors work on black guys. This one dude came to my prom with an all-white tux, a cane and a top hat, and he was easily the coolest guy I've ever seen despite the fact that I wasn't sure about whether he was actually enrolled. But the contrast on the lavendar suit might be a little too much because that's the blackest guy I've ever seen.