The thrill of victory, the agony of NBC's Olympics coverage.

I went nearly the entire first week of the winter Olympics watching a grand total of maybe 30 minutes of actual events, but I watched a ton of it while hanging out in the C-boogie this past weekend with the folks, and a few things have struck me:

· I know that this is America and we're supposed to be rooting for the American athletes, but NBC (and any future network that wins broadcast rights to this stuff) really needs to rethink their strategy of pre-selecting a specific group of a half-dozen or so athletes to hype the hell out of for weeks before the games even begin. Because then you're sort of banking almost all your credibility on a few guys who could very well embarrass you by tanking in any or all of their events . . . step forward, Bode Miller! Yeah, he's blown it all right, but the thing is, I was sick of hearing about him even before the Olympics began. And I think that was mainly because that before-the-fact hype centered primarily around not his athletic ability but the fact that he liked to get blitzed before taking to the slopes. I'm sorry, but if you're an athlete whose biggest draw is unapologetic engagement in some sort of chemical pursuit, guess what? People are probably only watching you to see when you're going to have your Ricky Williams beard-growing, Western-civilization-eschewing freakout. Of course, because he's a drunk, Bode's will probably involve a lot more vomiting. 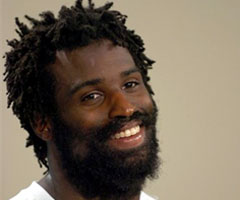 Soon to get a new roommate in rehab . . . just clear out some room for his skis.

Anyway. My point is, NBC, quit picking out one particular group of Kool Kids to hype because a) it annoys the hell out of us, and b) they're only gonna burn you. Remember Dan and Dave? Reebok does, but the same probably can't be said for anyone else.

· Maybe it's because of NBC's joyous shoving of only the most overrated American athletes down our throats, maybe it's because opening the doors to NHL superstars has rendered Olympic hockey pretty much irrelevant anyway, but you know what? When the USA faced off against Slovakia in hockey on Saturday, I was rooting for the motherland, and you know I'm talkin' 'bout the guys with a whole bunch of consonants in their names. The motherland pulled through, by the way. I now have an early birthday-present request: a Team Slovakia hockey sweater. Get on that! 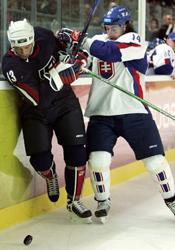 Four more wins and we're busting out the Borovicka, which is Slovak for "stuff you can drink instead of hairspray when all the other liquor is gone."

· Did Bob Costas really just interview Jerome Bettis during the Olympic prime-time broadcast? Jerome Bettis? C'mon, Bob, you're a smart guy -- I was counting on you to look a lot more embarassed during that bit than you actually did. If this is how NBC's gonna play it, I can't wait to see their exclusive interview with Phil Mickelson during the NBA finals.

· I'm certainly not trying to say that we've achieved everything we need to achieve in terms of race relations in this country, but I think it says a lot about how far we've come that all we have left in terms of milestones is stuff like "first black guy to win a gold medal in speed skating."

· By now you may be thinking, "You seem way too into the Winter Olympics there, chief -- what's next, you're gonna tell us you actually watched ice dancing?" To which I reply: Yes, I watched some fucking ice dancing; what of it? 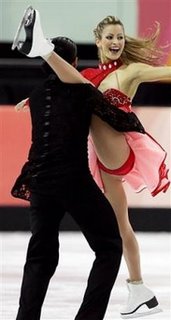 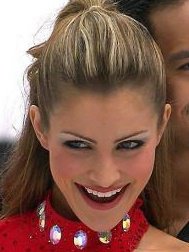 If Tanith Belbin is involved, the sport could be endurance snow-shoveling and I'd still tune in.

· And finally, as far as Lindsey Jacobellis's snowboard fuckup goes, yeah, it was stupid, but in all honesty I probably would've done the same thing. At least she still managed to pull a silver medal out of it; my most recent attempts at a "backside grab" haven't even been that successful, if you get my drift.
Posted by Astronaut Mike Dexter at 11:18 PM

This is the best part about living near the Canadian border: I can choose my coverage (NBC or CBC). Most of the time, CBC wins hands down...

I hope that, when CTV* airs the Vancouver Olympics in four years, they don't screw it up.

* CTV is another big Canadian network (their "Big Three" are this, CBC, and Global), better known for showing more US shows than Canadian ones...and the most popular Canadian series they air consist of an extension of a widely popular teen drama (Degrassi: The Next Generation, a comedy set at a gas station in Saskatchewan (Corner Gas), and Canadian Idol (hosted by the son of one of their most loathed ex-Prime Ministers and makes Ryan Seacrap seem somewhat decent).

I love the way Lindsey's been handling it, too. Every time she gets interviewed, the reporter is all, "Don't you just feel horrible about what you did? Don't you just feel shame? Isn't the shame just overwhelming? Don't you want to cut yourself and cry for hours every time you get back to the Olympic village? Will you be able to fly home without some kind of disguise?" and she's all, "Listen, I was having fun out there. I was having a great time, and enjoying myself, and I forgot where I was. In case you hadn't noticed, the going real fast and the flying and stuff? Is awesome. And I got a silver medal anyway." You go, Linds.

And I'm with you on the Slovak hockey sweater. Besides, most of Team Slo-vah-kia is on an American NHL team. I know I was cheering for Marion Hossa.

Wow...go and click on the NBC link for Belbin and scroll down...it looks like she's hanging with Joe Elliott.

The prurient angle on the Olympics keeps us glued to NBC. Low ratings clearly indicate our outlier status on what others find sexually attractive, but in short:

1. Female speed skating: the sport that can even make an Asian woman badonkadonktastic. It's women bending over in body suits for minutes at a time, for chrissakes. Thighs, mmm...

2. Snowboarders. We'd bet the farm they're not picky--at all.

3. Downhillers. Excepting Dorfmeister, who clearly hides his nuts with a well-constructed drag queen gaffe, they're an athletic bunch who clearly enjoy taking chances...like dating guys who enjoy blogging and drinking. What's riskier than that? Answer: nothing.

OK, I didn't have the courage to come clean about my thing for the speed skaters, but I'm glad you did. And to salute you for this, I will be petitioning Merriam-Webster to add "badonkadonktastic" to the next edition of the dictionary.

Maybe Bondra and Hossa just need to pretend they're wearing the Slovak jersey when they get back to Philips Arena. Either that or pretend their opponents are wearing the stars & stripes, cause they sure lit our ass up considering they've dropped about 10 out of their last 12 or 13 in Atlanta.

I kinda enjoyed watching those blonde sisters on the curling team until I figured out much of the rest of country did too... then just like with that once obscure band you liked who blew up and became huge, I felt it my duty to stop liking them so damn much.

And if that snowboarder wouldn't have been cute and blonde too, I'm betting you'd all be giving her a little more grief about it.