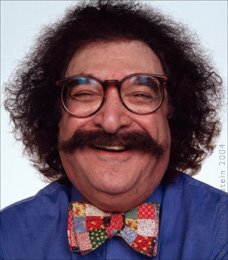 Gay guys hate this dude and it's not because of the hair?

As if "Brokeback Mountain" wasn't getting enough attention, now we have stupefyingly hirsute film critic Gene Shalit getting tagged by the Gay and Lesbian Alliance Against Defamation for an inappropriate choice of words in his review of the film. Just for the record, GLAAD wasn't slamming Shalit just for giving the movie a less-than-glowing review, but still, I can kind of sympathize -- every time I tell people "You know, I just don't have any interest in seeing that movie," I feel like a homophobe.

And no, I don't have any problem with gay people, or even with the thought of two gay dudes kissing -- look, I lived in Atlanta for two and a half years, so the very notion of two guys making out as "shocking" is something that I just can't help but giggle at. I think my non-interest is derived from two things, the first being just a general desire to be contrary: The more people nag at me to do something, the less I want to do it, until my attitude turns from apathy to outright opposition. It happened with the "Lord of the Rings" movies -- when the first one came out, I didn't really have any feelings about it one way or another, but the longer and longer I went without having seen it, the more people nagged and berated me for it, so finally I made the conscious decision not to see any of the LOTR flicks just to be an asshole.

But the second and perhaps more relevant reason is because I think there's a plot afoot here -- and no, right-wing nuts, it isn't gay indoctrination. Look at what this movie primarily offers: Heath Ledger, romance, guys in tight jeans, gay dudes. These are all things women love. And that's why I think "Brokeback Mountain," rather than being some big gay-indoctrination political statement, is actually the biggest stealth chick flick of our time. I mean, really, if I told you "Heath Ledger," "cowboys" and "romance" without mentioning "gay cowboys fucking," you'd think "chick flick," right? Give Ledger or Gyllenhaal a cute-but-neurotic hag and throw in a couple Harry Connick Jr. tunes and what you've got is a prequel to "Will & Grace: The Movie."

Now, I'm not going to make any judgments on the quality of the movie itself without having seen it, and I'm willing to stipulate that the acting and filmmaking talents displayed therein are top-notch. Worthy of the Best Picture Oscar . . . well, in all honesty, who cares? All I know is that neither "The 40-Year-Old Virgin" nor "Mr. and Mrs. Smith" got any Oscar nominations at all, and therefore I can only conclude that the whole process is as bogus as a football bat. And why is the Academy's opinion any more valid than mine -- or, for that matter, T. Kyle King's, which is that "The Dukes of Hazzard" wuz robbed? As I've said before, the only thing I really remember about that movie is Jessica Simpson in one tiny outfit or another, but how is my enjoyment of that any less legitimate than a so-called "discerning" filmgoer's enjoyment of Heath Ledger's gay-cowboy verisimillitude? Ledger has his God-given acting talents, Jessica has her God-given . . . uh, other things, so who among us has the right to tell anyone else which they should think is better? 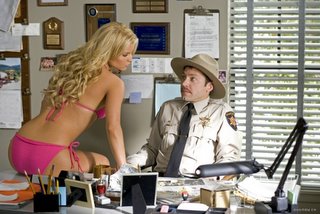 T. Kyle to Jessica: "I wish I knew how to quit you."
Posted by Astronaut Mike Dexter at 1:43 PM

I don't care about Brokeback Mountain either...and I'm a 100% heterosexual chick. And a liberal one at that. And a Protestant. (But let's not go there. ;)) Why don't I care? It's a pseudo-western. Westerns (with very few exceptions) aren't my cuppa.