I say "obligatory" because, as you've no doubt realized if you've been reading this blog for any length of time, any Super Bowl that doesn't include the Redskins automatically has two big strikes against it in terms of capturing my interest. Now, football has always been the one sport I will make a point to watch even if I don't particularly care about either of the teams participating; which distinguishes it from, say, baseball, which I like but can't really get into beyond rooting for the Braves or the continued misery of the Mets, or pro basketball, which for me occupies a level of awareness somewhere around performance art or Canadian politics. Particularly if there's nothing else on, not only will I sit down and watch a football game pitting, say, Central Southwestern Bumfuck Tech against the Greater Birmingham School for the Deaf, Dumb, and Blind, I can probably pick someone to root for within five minutes of kickoff. (That would be Birmingham DD&B, by the way. Underdogs and all that.)

But for the last 10 years or so -- likely coinciding with the point at which the Bulldogs began superseding my NFL loyalties in terms of which team I lived with, died with, ate, slept, and pooped -- the Super Bowl has maintained a distressing trend whereby it seems to be less and less of a big deal to me with each passing year. When I was a kid, the Super Bowl was Must-See TV pretty much every year, because there was a good chance it would feature either the 'Skins to root for or the Cowboys to root against. But the chore of picking a team to root for has gotten to the point where it now requires real physical effort on my part, as evidenced by this timeline:

1998, Green Bay vs. Denver: Liked Brett Favre, didn't buy into the whole "Shucks, wouldn't it be great if John Elway finally won a Super Bowl?" lovefest. Dude, if Elway hasn't won a SB yet, whose fault is that? Advantage: Packers.
1999, Denver vs. Atlanta: Gotta go with the semi-hometown team, naturally, although even before the big day finally rolled around all of us in Athens probably had some idea what a massive windmill we were tilting at with those guys. Advantage: Falcons.
2000, St. Louis vs. Tennessee: These were the salad days of Kurt Warner, back when you could root for him out of sheer stunned excitement rather than "Aw, don't worry, man, Eli Manning ain't shit" pity. Advantage: Rams, though I'd be lying if I said I wasn't hoping Kevin Dyson would get that one last yard and force OT.
2001, Baltimore vs. New York: Giants, feh. And if the 'Skins can't get out of bed in the morning, much less make it to a Super Bowl, I can at least plaster a smile on my face and pretend that B-more is the next best thing. Advantage: Ravens.
2002, St. Louis vs. New England: In retrospect I get a real Bizarro World feeling knowing that I ever rooted for New England based on underdog status, so I'll peg this one as the point at which my SB interest began to trend markedly downward. Best fuckin' halftime show in the history of the game, though (a compliment that probably deserves to be in Webster's under the entry for "faint praise"). Advantage: Patriots.
2003, Oakland vs. Tampa Bay: Never had much use for the Raiders; that didn't necessarily mean I was jazzed about Tampa, though. I think I only pulled for TB based on my admiration for/fear of Jon Gruden, a guy crazy enough to earn the title of "the Kool Keith of NFL head coaches." Advantage: Bucs.
2004, Carolina vs. New England: Had to listen to this one on the radio while I drove from South Carolina back to Birmingham, and the fact that I didn't make any effort to reschedule my trip should probably tell you something. Advantage: I don't even remember.
2005, New England vs. Philadelphia: Deep down I think I wanted Philly to win, but not so much Philly as Donovan McNabb, and only then so Rush Limbaugh would look like an even bigger assbag than he already did. But rooting for McNabb also meant rooting for T.O., so . . . Advantage: The special episode of "The Simpsons" that came on directly afterward.

So now we've got Pittsburgh vs. Seattle, two teams that I have absolutely nothing against and like various things about, yet I haven't been able to come up with any feelings on Super Bowl XL more insightful than "Isn't it kind of weird that in clothing sizes, 'XL' is bigger than 'L,' but in Roman numerals it's the other way around?" (Nice, huh? Came up with that while I was picking up groceries this morning. No, no, you're welcome.) I like Pittsburgh's blue-collar ethos, I like Ben Roethlisberger (starting QB for my fantasy team this year, represent), I like Bill Cowher and his mustache, I love Hines Ward; I know I told at least a few people earlier in the week I'd be rooting for Pittsburgh, and yet . . . and yet . . .

The whole media hype over this matchup is starting to sound awfully reminiscent of the hype over two other very important football games to have taken place in the past month or so. You've got a team that's a clear favorite, at least according to the oddsmakers; one team with more of a pigskin tradition, and thus what the media see as way more worthy backstories and subplots. One team that gets talked about so much on TV that you almost have to start leaving yourself Post-It notes on the fridge to remind you who the other team is.

Those two other games I'm talking about? Georgia-West Virginia in the Sugar Bowl, and USC-Texas in the Rose. And in both cases, that favorite, that supposedly superior squad, that bunch that the media just couldn't stop talking about, went down in flames. Well, at least USC's flames could be characterized as a "blaze of glory" -- Georgia's certainly couldn't, unless your usage of "blaze" is meant to imply "pot smoke," which would certainly explain why Georgia's defense seemed to be running at about half the speed of those Mountaineers who supposedly weren't worth giving a shit about.

My point is that I feel like the Steelers are kind of being shoved down my throat here, and while it's certainly easier for me to tolerate that than, say, the Cowboys, I still have to ask (and imagine this being read in the voice of one of those sorority-type girls who puts a rising inflection at the end of everything she says) -- um, there's this team? Called the Seahawks? And they're, you know, really good? Good enough to be a one seed in their conference? You know? . . .

Don't get me wrong, I still love Cowher. Still love Ruthless. Still love Hines Ward, who I hope gets 12 grabs for 200-something yards today. But I also love the city of Seattle and everything associated with it -- yes, including Starbucks; hating Starbucks is just another one of those liberal causes celebre along with "Brokeback Mountain" and the Alito nomination I just can't quite get out of bed for. Meanwhile, I can't say I've ever gotten all that jazzed about the Steel City. (Hey, I live in what was once called "the Pittsburgh of the South" -- you think that makes the ladies weak in the knees?) Seattle's got a couple Georgia guys too. And if a city already has four Super Bowl titles to its credit, then it's going to take an awful lot of effort for me to cheer them past a team that's still waiting for its first.

But the real tipping point is this: Seattle has the SeaGals, maybe the most underrated cheerleading squad in the NFL. (Yes, bogarting the title from the San Diego Chargers. It's my blog, I'll change my mind if I want to.) Whereas the Steelers have . . . the what now? No cheerleading squad whatsoever? Dude . . . 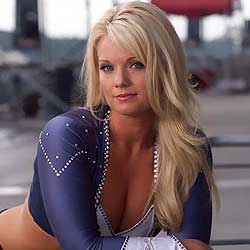 Her name is Sequoia; please try to contain your shock upon learning that she's originally from the West Coast.

It's gonna go down like this: Pittsburgh puts up a couple scores fast enough to make people think this is gonna be another 2003-style ass-pounding, but Seattle just keeps chip, chip, chipping away until Josh Brown boots the go-ahead field goal with under a minute left, 'Hawks win, 23-21. Super Bowl MVP -- oh, I don't know, let's be saucy: Hasselbeck.

Oh, and despite the best efforts of the TV censors, there will be bare nipples in the halftime show for the second time in three years. Too bad they'll be Keith's. 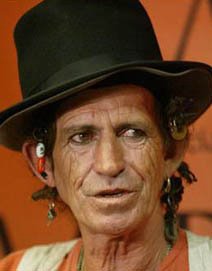 Turned 62 just a couple months ago. Doesn't look a day over 90.
Posted by Astronaut Mike Dexter at 1:01 PM

Perhaps it would have been an easier decision for you had you know that the Oxy king himself,
Rush Limbaugh, is a fan of the Steelers (that's actually the only thing I don't like about them,,,, well and that they are not the Redskins.)