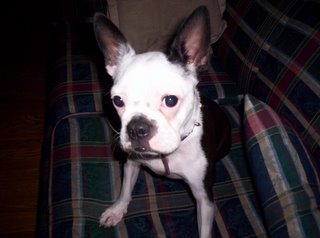 First picture I took with the new camera -- of the dog, of course. 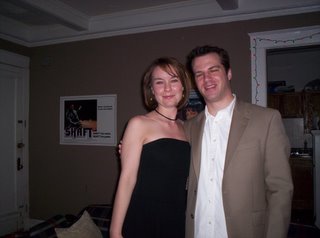 Me and my friend Jamie going out for New Year's. See how I kept my eyes closed? I do that in all the pictures of me that would otherwise be cool -- it's just my way of saying, "I'm so fly I don't need to keep my eyes open, cousin." Too real for you to handle. 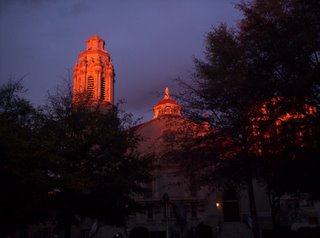 The old Methodist church at Five Points, right near my apartment. 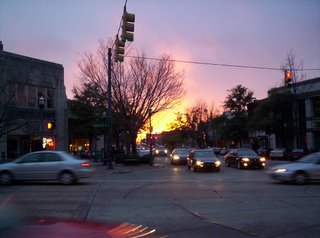 Looking the other way from Five Points. That's what's left of the sunset in the background, not a raging four-alarm fire on the UAB campus. 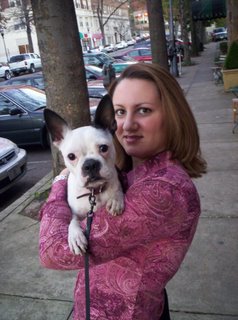 This is Jenna with Chez Fon Fon hostess/dogsitter extraordinaire Autumn, who usually takes care of her while I'm out of town. 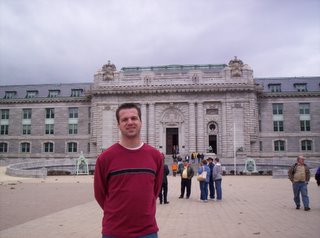 This is me on my trip to Maryland last month. That building behind me? Is the Naval Academy's dorms. (To all the fellow Georgia alums out there who might be wondering: Yes, they put UGA's dorms to shame.) 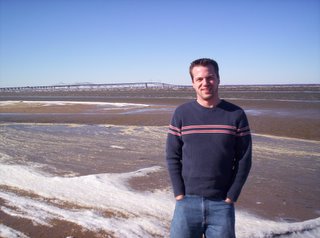 Now for the interactive portion: This is me a) at the shore of the Chesapeake Bay with the Bay Bridge in the background or b) me being a complete dumbass, since it was about 30 degrees that morning and the lake-effect wind was blowing about 40 miles an hour while this picture was being taken. The seafoam you see on the shore behind me is actually frozen. That very faint sound you hear is my mom yelling "Where the f$#! is your jacket?!?" from somewhere in Georgia.
Posted by Astronaut Mike Dexter at 8:15 AM

You were up in the DC area and you didn't visit? WTF, man...

1) You really go for the horizontal stripes, don't you?

2)I know your Mom, and she would never use words like "f$#!"- you are projecting your own obscene mind onto your poor sweet mother.

3) Jamie looks sweet- did she ever go out with you a second time?

Well, of course not, anonymous -- I've concluded that if a woman were to go out with me more than once, that would violate some kind of law of creation, and the universe would cease to exist.