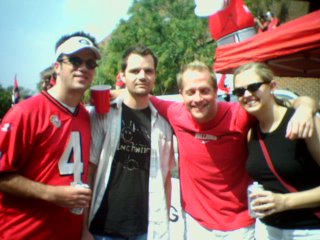 Ah, tailgating, how I've missed you.

Orson and Stranko from Every Day Should Be Saturday are so excited, they just can't hide it, they're about to lose control and I think they like it: Spring practice is about to start for college football teams around the country. The lonely silence in cities such as Athens, Gainesville, Ann Arbor, and Murfreesboro is about to be broken once again by the crack of the pads, and we'll once again treat ourselves to anxious talk of new-recruit sightings, position battles, and, of course, the ultimately meaningless exhibitions known as spring games.

To the non-football-initiated among you, this probably sounds like the college-football equivalent of desperately raiding the pantry and drinking all the vanilla extract just to get buzzed. Well, we never claimed it was otherwise. But it's funny you should mention drinking, because Orson came up with a wonderful idea: Blogger tailgate before the G-Day Game! G-Day, in case you were confused, is the Georgia Bulldogs' spring game, and since the Atlanta/Athens area seems to be home to an inordinate number of sports bloggers, a bunch of us decided a G-Day tailgate would be a great opportunity for area bloggers to get together, put faces with names ("Oh! So you're that asscrack who said [insert coach's name here] couldn't coach his way out of a wet paper bag!"), do some drinkin', and feed our football fix.

So if you're interested in attending, consider this post an open thread to weigh in on suggested locations, start times, food/booze selections, and whatever else. The current prevailing opinion seems to be the beautiful north campus quad, which means we'll have to get there early to snag a spot, but since kickoff's at noon we'd probably have to do that anyway. Also feel free to suggest postgame extracurriculars for those who might be interested. (You were thinking Topper's, perhaps? Way ahead of you, homes.)

While I'm thinking about it, this is as good a time as any to update my blogroll of fellow sports fanatics:

Orson and Stranko at EDSBS have officially moved up into the "Friends of Doug" category, because if a couple of Florida fans are willing to do a tailgate before the freaking Georgia spring game . . . well, those are some special people, and not in the short-bus way.

Paul Westerdawg, Mayor T. Kyle King, The Drizzle, and Gunslingers get the same treatment, as does Ian from Sexy Results, though I'm waiting for his dissertation on the societal significance of a song titled "It's Hard Out Here for a Pimp" being nominated for an Oscar.

Please welcome to the blogroll Michigan fans Brian from mgoblog and Yost at The M Zone. In the alternate universe where I attended Michigan instead of Georgia, I'm probably e-mailing these guys every five minutes for spiritual guidance in my attempt to reconcile Lloyd Carr's current mediocrity with the fact that he won me a national title my sophomore year.

And what the hell, Dan from What's the Good Word and Nathan from Golden Tornado. Christ, did I just blogroll a couple of Georgia Tech fans? I must be slippin' . . .

It's also time for a long-overdue link to Warren St. John, author of the book Rammer Jammer Yellow Hammer and proprietor of blog of the same name. He's earned a spot in my personal Hall of Fame for being able to write the definitive SEC tailgating opus without reverting to the "Heh, get a load of these wack jobs" condescension I'd expect from a lot of the non-Southern journos out there.

Not sports-specific, but I likes 'em anyway: Fellow former Columbusite Tommy Perkins, and fellow journalist and Alabamian Newspaper Hack. Welcome! Free pigs in a blanket for everybody!
Posted by Astronaut Mike Dexter at 2:15 PM

Is that Chandler? He looks like he's so drunk he can barely stand.

Alright - fine, motherfucker! I won't come to your stupid tailgate!

My personal preference for a tailgating spot would be in front of Phi Kappa Hall, site of many fond memories for me, but, since we are hosting folks who did not attend the University of Georgia, my suggestion would be for us to pick a meeting time and have everyone be at the Arch at that time, so we'll all have a universally recognizable focal point at which to link up with one another. If someone's late, we can simply set up shop and send one of us over to the Arch every 15 minutes or so to pick up the stragglers or the geographically challenged.

Do we have any idea how many folks will be there? Based on the comments at E.D.S.B.S., I think we're looking at you, me, Paul Westerdawg, Orson, Michael, Ian, and The Drizzle for more-or-less sure, with Jacket Dan and hopefully The Realist, L.D., and some others possibly attending, as well. Once we have a decent head count, we can divvy up the responsibilities.

It sounds like Orson has the libations covered, so put me down for whatever picnic items (fried chicken, side dishes, utensils, condiments, napkins, soft drinks---you make the call) you consider appropriate. Who's in charge of bringing the hot blogger groupies?

Great job putting this together!

Mack DOWN on the fried chicken, Kyle. What what! (That means, in translation, hell to the yes.)

I can find you wherever you end up setting up, as we'll be there in plenty of time to allow for getting lost. We sometimes weekend in Athens, so I know where you're talking about. (Dropping the second person plural! Heavens, we're excited...)

All right, then put me down for bringing fried chicken.

I'm guessing the S.E.C. quadrant of the college football blogosphere consists of hearty eaters, so how much do you think we'll need?

Count me in for the tailgating. I make (in the opinion of some) a bomb-ass pasta salad, or something sweet and nibbly, depending on what people are feeling like.

Come on, folks, everything's better with just a touch of estrogen.

I'll be there in some form or fashion.

You thinking pre-game tailgate or post-game?

I'm in and can't cook for shit, so can I bring beer?