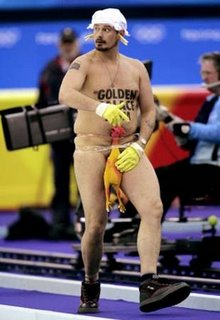 You call that a milestone? First man to streak a curling match! Take that, Shani Davis!

The Olympics may not be over yet, but the closing ceremonies are right around the corner and we've had time to rack up 23 medals, take in 98 curling matches, and fully appreciate the nuclear hotness of Tanith Belbin and Kiira Korpi (aren't you glad I have nothing better to do at 8 o'clock on a Thursday evening than watch fuckin' figure skating and can therefore keep you informed about stuff like this?), so I figured now was as good a time as any to let loose with a good rant.

Yesterday Jeff Schultz, shortly after what I can only guess was a hearty breakfast of freshly pissed-in Cheerios, penned this column about what he believes has been a generally disappointing performance by U.S. athletes in general at the winter games. Now, as sports columnists go, Jeff Schultz is a badass and I enjoy his stuff a lot, so I'm not trying to whale only on him here. He certainly isn't the only one who has bemoaned what is perceived as an overall lack of success from Team USA. But as of the time I was writing this, the U.S. had 23 total medals -- second out of all the countries participating, and just one behind the leader, Germany; they also had 8 gold medals, again in second place and just one behind Germany. Call me crazy, but that doesn't seem altogether humiliating. Why is there such a widespread perception that the Olympics were such a complete flop for the American team?

Probably because the three most-hyped competitors -- Bode Miller, Michelle Kwan, and the men's hockey team -- were the ones that flopped the biggest. And for the hype we can thank NBC and their corporate sponsors, who seemed to believe that those three were the only competitors the United States was bothering to field in the '06 games. I know I've ranted on this already, but when you hype the ever-living shit out of only three or four people -- to the exclusion of nearly all the other athletes -- you're putting your credibility on the line in a big way. NBC put their entire wad on 00, they lost, and now they're reduced to begging from the hotel staff just for enough cab fare to make it to the airport.

Think of it this way: Pre-Olympics, we were force-fed a steady diet of Bode Miller, Michelle Kwan, and Lindsey Jacobellis. Miller halfassed his way through the ski events and went home medal-less; Kwan strongarmed her way onto the team without even competing in nationals, then withdrew due to injury before she even got a chance to reset her watch to Torino time; Jacobellis blew a career-making gold medal with a showboat move (which, in her sort-of defense, was funnier than it was tragic). So of course it looks like the USA's Olympics were a bust. But what if, instead, NBC's hype machine had been giving us a subtle but steady morphine drip of all the athletes, including Shaun White, who annihilated the snowboard halfpipe; Shani Davis, who became the first black dude to ever win an individual medal in the Winter Olympics; Ted Ligety, who actually won a gold medal in skiing; and the Belbin-Agosto ice-dancing pair, who won America's first ice-dancing medal in 30 years? If we had known those people existed, and had been prepped to cheer for them rather than just for Miller and Kwan, maybe we'd be more appreciative of their efforts and wouldn't look upon this whole enterprise as such a bummer. 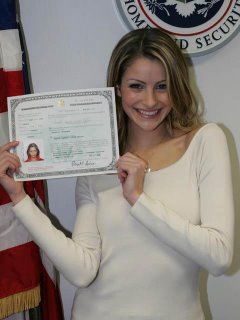 Yes, another flimsy excuse to put Tanith Belbin up here. It's my blog; sorry, that's just how I roll.

At any rate, I don't know why so many Americans seem to feel like they have the right to take Winter-Olympics superiority for granted. I don't know if y'all noticed, but this really isn't a winter-sports country we're living in -- I mean, they cancelled the entire hockey season a couple years ago and in Alabama, at least, that probably got less attention than the Crimson Tide's Music City Bowl bid. And the people here start bum-rushing the grocery stores and driving like 'tards if there's so much as a ten-percent chance of snow for any given night, so I'm not surprised that they're not flooding Craigslist looking for luge instructors. Really, it's not hard to see why Americans can't quite get into winter sports the same way they do summer; if you want to take up running then you just go run someplace, and if you want to take up swimming you just find yourself a pool and jump in it. But if I wanted to take up skiing, I'd have to spend shit-tons of money on all the equipment, then go move at least to North Carolina to find someplace where I could practice my sport with any regularity. To look at it another way, you could probably have the Summer Olympics in just about any part of the country, but there are only a very few places you could pull it off for winter. We've had it in Salt Lake, Squaw Valley, and Lake Placid twice; basically we've got Tahoe and Sun Valley left, and that's probably it.

So I don't blame the United States for not being a gold-medal-hoarding winter-sports juggernaut. And I think it's kind of funny how a lot of people in this country don't even know what a luge is but still feel they have the right to get pissed every four years that Team USA didn't win any medals in it; these people kind of remind me of some of those UGA sorority girls whose football knowledge could probably be packed into a thimble, yet have no qualms about throwing spritzer-fueled tantrums at Sanford Stadium because Mark Richt committed the unpardonable sin of not going for it on 4th-and-10 from his own 25. When you get right down to it, there are probably only two sports in which the U.S. has any right to take superiority as a given -- snowboarding, 'cause we invented that shit, and figure skating, just 'cause, well, we always seem to be good at it for whatever reason. And I might even narrow that down to women's figure skating, because I couldn't tell you the last time an American man won a medal in that, not that I've been paying a lot of attention.

My point is that we should be happy to win medals in those and probably look upon everything beyond that as gravy, because this isn't Norway or Austria where you can walk right out your front door and find a mountain worth skiing down. Yeah, I know, in Bush's America we're all supposed to believe that America is the best at everything mankind has ever done or attempted to do, but if you're so chafed at the United States having surrendered its God-given Alpine-skiing superiority, why don't you go strap on some skis, tiger.

So I'm proud of Team USA and its medal haul this year, and I don't think we have anything to be all disappointed about. Well, OK, there's one other sport I think we should be pwning, and as a result I guess I'm a little disappointed we didn't do better in it this year: skeleton. Don't even try and tell me that wasn't invented by some drunk rednecks who happened to live in one of the cold-weather parts of the United States. One of the guys goes downhill on a sled; the next guy, with an entire twelver of Natty Light in his system, utters the traditional last words of the redneck -- "Naw, y'all, watch this" -- and proceeds to go down the hill head-first. Sure, he breaks his neck and ends up filing the most ill-conceived worker's comp claim in history . . . but a new sport is born. Seriously, how could they have come up with it any other way? And if a sport involves that much drunkenness and/or stupidity, shouldn't we, as Americans, be worldwide ass-kickers at it? 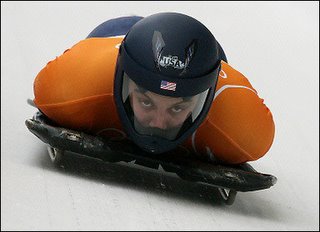 The US media are a bunch of idiots in this regard. Plain and simple.

Interesting point about skeleton, I had never thought of the redneck connection there, perhaps because it was hidden in plain sight. An interesting side note to Winter Sports/good 'ole boys is in the bobsled. A few years ago Geoff Bodine (yep the NASCAR driver) got tired of seeing american bobsledders competing with inferior equipment against the rest of the world. So he hauled a bunch of bobsleds to his race teams R/D facility and had his aerodynamic engineers build a better one. The Bodine sled, which was refered to by the NBC commentators several times without explaination (at least no explaination I saw) was the result of that work and is now the standard by which the rest of the world measures their sleds performance. So it is perfectly acceptable to crack open a PBR and yell "Yeeha!" during those events. Actually, it is ok from my point of veiw whether the olympics are on or not....

Herschel was on the US Bobsled team a few years back. That was the zenith of my winter olympics give a shits.