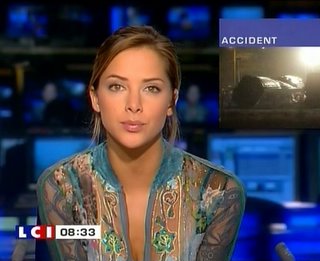 Well, the ballots have been tallied from the Pick the Next Official Fake Girlfriend of Hey Jenny Slater Contest, and it wasn't even close. So not-close, in fact, that the refs had to invoke the seven-inning mercy rule before crowning the winner. Meliissa "Frenchy" Theuriau overcame the language barrier, the stigma of being a French citizen -- sorry, a Freedom citizen -- and upstart status to smoke the rest of the field like a Gitane and claim a shocking victory. (I'm going to refrain from making the obvious joke about being shocked to see "French" and "victory" in the same sentence, but that doesn't mean y'all have to.) In the event that Theuriau is unable to fulfill her duties, or files un ordre cesser-et-renoncent against us, the title goes to the first runner-up, hockey superfan Elisha Cuthbert -- but until then, to Miss (please let it be Miss) Theuriau, congratulations.

So now I guess I'm going to have to petition my local Bright House provider to start carrying LCI or whatever the hell channel she's on, but that's only one of probably many lifestyle changes that will need to be made on the part of myself and this blog. Some, such as eating escargot or driving a Citroën, will be fairly easy since I kind of liked those anyway. Others, such as becoming a wine snob, disdaining America, or finding anything remotely sexy about Gerard Depardieu, will be more difficult. But some sacrifices you just gotta make, I guess. And besides, I'm already huge in France. Huge. Jerry Lewis ain't got shit on me. Mis cela dans votre pipe et fumez-la. 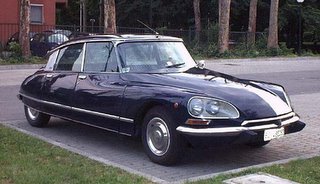 Laugh if you must, but it's still a hell of a lot easier for me to find this attractive than Depardieu.

(More Citroën shit here -- these cars are the joint, son. And yes, the chicks dig 'em.)
Posted by Astronaut Mike Dexter at 8:01 PM

I got linked to her for the first time maybe 6 or 8 months ago. That was a happy day. That chick is pure smoke.