Separatin' the men from the boys.

College Football News has the list of 2006 SEC football schedules up along with brief analysis of how well each team can expect to do. All in all, their predictions of best-case, worst-case, and probable scenarios look pretty accurate, and their outlook for Georgia is promising; they have the Dawgs' "realistic record" for 2006 at 9-3, which is pretty much what I told Dan from What's the Good Word in our Q&A on recruiting and the outlook for 2006. CFN also says Georgia's "barring total disaster worst-case record" is 7-5, which, while certainly not up to the level of the last 4 seasons, is not wrist-slittingly bad for a team breaking in a brand-new QB and plenty of players in important spots on defense.

Given all the talk recently about "The Movement" (as started by T. Kyle King) to upgrade Georgia's out-of-conference schedule by booking a date with the Michigan Wolverines, I found it interesting, too, that as far as OOC schedules go, Georgia really has nothing to be ashamed of this year, at least in comparison to the rest of the SEC. Colorado and Georgia Tech, while not exactly national-title-contending powerhouses, are still competitive BCS squads who have a combined 9 bowl appearances in the last five years; and while I know I'm biased regarding anything UAB-related, the Blazers have a habit of almost always playing SEC teams tougher than they have any right to -- just ask Georgia's 2003 team, who barely squeaked by UAB on Homecoming Saturday. Better yet, ask LSU's 2000 team, who who got humiliated by UAB for their homecoming game. In Tiger Stadium. (I'm not wild about admitting it, but that's one more win in Baton Rouge than Georgia has the last 6 seasons.) Without the shoulders of man-beast QB Darrell Hackney to dump entire games on, UAB might actually be a better, more balanced squad than they were last year.

The only real eye-roller on Georgia's '06 schedule is the season-opening opponent, DI-AA Western Kentucky. I'll reiterate my call for Georgia to refrain from scheduling any more I-AA opponents outside of the every-five-years-or-so raging kegger with Georgia Southern. 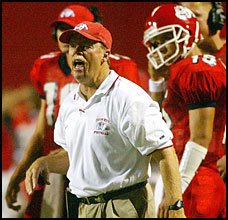 This picture wasn't even taken at a football game; Pat Hill is actually screaming at a Red Lobster server who got his order wrong. Yes, he makes his players dress like that all the time.

However, the Pat Hill Trophy for OOC Ballsiness goes to Tennessee for putting Cal, Air Force, Marshall, and Memphis on the schedule. Now, it doesn't look all that imposing at first blush, and lord knows I'd rather pull my own toenails out with pliers than say anything complimentary about the Vols, but Cal is going to be very good next year, Air Force should be much improved (assuming Fisher DeBerry has been able to recruit some of those speedy black folk he was raving about last season), and I was surprised UT agreed to play Memphis ever again after getting punked by the Tigers back in 1996. I also have to give Tennessee some credit for not using a disastrous season as an excuse to bitch out of any of these challenging OOC commitments, like some other SEC schools I could name.

Runner-up for the Hill Award: Georgia, of course, though I would be remiss if I didn't point out that LSU scheduled Hill's own team, the Fresno State Bulldogs, for a home date on October 21. 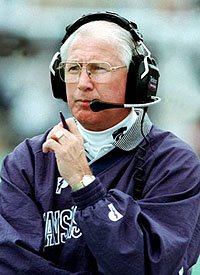 Former Kansas State coach Bill Snyder, deep in thought. When you're going up against the likes of Florida International, you know it's going to be a chess match.

Not surprisingly, though, the competition was far more heated for the Bill Snyder Commemorative Golden Skirt Award for Pansy OOC Scheduling, and in the end it came down to a neck-and-neck race between Alabama and South Carolina. But as with their regular-season matchup last year, the Crimson Tide has emerged the winner. Here's their non-SEC slate: September 2, at home against a Hawaii team that will have to travel 5,000 miles just to get to Tuscaloosa; two weeks later, at home against Louisiana-Monroe, 'nuff said; October 7, at home against Duke (though I wait with bated breath for the Tide fans to start trying to convince people this is a real test because Duke is, after all, a BCS-conference team); and October 28, at home against Florida International. For a total of eight home games, which has to be some kind of record. Along with the Golden Skirt trophy, each of Alabama's players will take home a prize package including a Hello Kitty purse, a charm bracelet, and a one-year subscription to Sassy.

Runner-up: South Carolina, who only missed top honors because of their traditional season-ending game against Clemson (a road game this year). The rest of their out-of-conference slate: Wofford, Florida Atlantic, and MTSU. Also, Auburn has officially forfeited any right to whine about a potential BCS snub after booking Washington State (yeah, they kick ass about twice every decade -- 2006 isn't going to be one of those times), Buffalo, Tulane, and Arkansas State. No prize packages for y'all, but . . . what the hell, subscriptions to Sassy all around.

Buffalo, Tulane, and ASU? I feel like I'm in a sassy sandwich!

Intersectional matchup not involving Georgia I'm most looking forward to: Probably Tennessee-Cal, but LSU-Fresno should be a pretty fun one, too. LSU's fans have a rep for being some of the most confrontational in the country, but Pat Hill will be having none of that. (If you need more explanation of what I'm talking about, I've never read a better analogy for Fresno's "fuck it" attitude than Ian's right here.) Plus the inter-conference Rivalry Week matchups like SC-Clemson and Florida-FSU are always good ones. Florida State, in particular, hasn't been able to live without rageahol since last year's rump-thrashing by the Gators. Whether that motivation will be enough to overcome the Sooper Genius playcalling of Jeff Bowden, however, remains to be seen.
Posted by Astronaut Mike Dexter at 8:08 PM

That UAB loss in 2000 is one of the best losses we ever had. It made Saban ditch Josh Booty for Rohan and the next week we upset Tennessee in BR. After that the season turned around and we ended up beating Tekk in the Peach Bowl. The Peach Bowl win was especially big since we were in Saban's first year and just getting over the disasters of Dinardo's last few years. Also I'd like to add that you completely ignored LSU's game against what should be a pretty decent Arizona team this year.

As a Bama fan (and now grad student) and a Carolina alumnus, I wear my Golden Skirt with pride. After all, I remember the homecoming debacle in 2000 when Bama got punk'd by UCF. Icky. I just need to find my Hello Kitty purse.

Speaking of UCF, I'm pretty sure they're the reason we're having to play Western Kentucky, Doug. They backed out on games with us and SC in the 06 season. I guess O'Leary only likes playing UGA when we have RB's named Sanks... and they're using ineligble players.

It's always struck me as funny that the two teams that have backed out on scheduled games with Georgia are Tulane and Central Florida.

The Green Wave is coached by Chris Scelfo, a former Georgia assistant and protege of Jim Donnan, whom Georgia fired.

The Golden Knights, of course, are coached by George O'Leary, a former Georgia Tech coach.

Guys with no axes to grind seem perfectly willing to come play the 'Dawgs. Guys with scores to settle sure seem to develop last-minute scheduling conflicts an awful lot.

The moral of the story is: scheduling an out-of-conference opponent whose head coach has a personal interest in doing you dirty is as dumb as Chandler giving his clothes to Julia Roberts in the bathroom scene of the post-Super Bowl episode of "Friends."