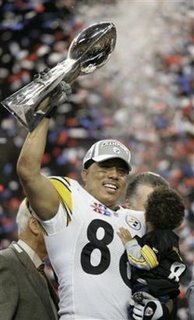 Well, I was right about Pittsburgh's half of the final score, at least, and they can't take that away from me. As far as being wrong about everything else, though, getting to watch former Bulldog Hines Ward pick up Super Bowl MVP honors sure salves whatever pain there was from that. The option pass from Randle-El that scored the game-icing touchdown was a thing of beauty, but honestly, given that Pittsburgh's starting offensive 11 includes three guys who started at QB at some point in their college careers, you almost have to wonder why they don't run that kind of thing every other play. (Wonder if D.J. Shockley should just go ahead and start looking for a condo in Pittsburgh now?)

Other things that were fun to watch:

· The pregame parade of previous Super Bowl MVPs, which included three ex-Redskins: Mark Rypien, Doug Williams (w00t) and crazy bastard John Riggins. Honestly, if I'd just come out and told you that there was a white RB who amounted to anything in the NFL as recently as 1985, your first inclination would've been to put me in a white padded room, wouldn't it?

· The FedEx commercial with the cavemen, which gets my honor for best commercial of the night. (Runners-up: The Bud Light "sheep streaker" ad and the MasterCard ad with MacGyver.)

· A halftime show that didn't suck, and I hope that recent halftime-show successes from U2, Paul McCartney, and the Stones -- particularly when combined with the very high-profile fiascoes from Justin Timberlake/Janet Jackson and Ashlee Simpson (in last year's Orange Bowl) -- mean that we have officially closed the door on the era of teenybopper pop acts in football halftime programming. I'm still confounded by the logic of someone who can look at the overall community on NFL fans and think, "I think what these people are really clamoring for is a guy who used to be in N'Sync."

· The fact that Aaron Neville's pre-game rendition of the national anthem was almost a carbon copy of Horatio Sanz's performance parodizing Neville in the previous night's episode of "Saturday Night Live."

· Bill Cowher finally winning one. Honestly, when you think "hard-ass NFL coach," aren't that mustache and that chin two of the first things that pop into your head? I'm counting on the guys at EDSBS to devote a Very Special "Mustache Wednesday" to The Cowher. 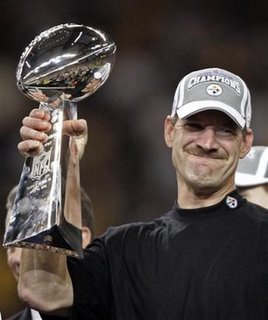 Finally a legitimate dark-horse candidate to play Magnum, P.I. How could I not have thought of this before?
Posted by Astronaut Mike Dexter at 7:55 AM