In my midnight confessions, when I tell all the world that I love figure skating, Legos, and the Cadillac Escalade.

Well, since I've come out as someone who actually watches figure skating/ice dancing in the Olympics -- even if it's mainly for the eye candy -- I figured now is as good a time as any to bust out with another installment of everyone's favorite, most embarrassing game, Is It Bad That . . . ? The last one came off pretty well in terms of me not being completely cast out of society, so I'm optimistic about the second round. Here we go: 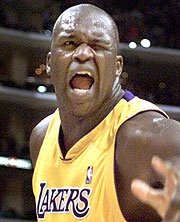 Sasha Cohen vs. Shaq Diesel: Sasha can't dunk, but still, whose mug would you rather look at?

Is it bad that . . . as a sports fan, I probably care more about, say, tomorrow night's figure-skating competition than the NBA? It's not that I hate basketball -- I don't follow it nearly as closely as football, obviously, but I can appreciate a good college game. But there is absolutely nothing about professional hoops that appeals to me. Don't like the players, not crazy about most of the coaches either. I'd probably pay more attention if they got rid of the actual games and just had slam-dunk contests all season long.

Is it bad that . . . I like the Cadillac Escalade? And unlike the Nissan Armada I referred to in the earlier confessional, I would actually drive one. Especially the EXT version. I know the idea of a Cadillac pickup truck probably sounds retarded to some of you, but at least this vehicle is somewhat functional, which is more than you can say for the Hummer H2, which as far as I'm concerned should come standard with an "Ask Me How Tiny My Dick Is" bumper sticker.

Is it bad that . . . I bought this a few days ago? I stand firm in my conviction that every adult should have one toy they carry over from childhood, just to keep from taking themselves too seriously; mine happens to be Legos. Sue me.

When I was five years old, I vowed that I would one day have the discretionary income to buy crap like this all the time. Today, I live the dream.

Is it bad that . . . I don't hate the New York Yankees? I mean, I certainly don't root for them that often, if for no other reason than because I'm not a pull-for-the-overdog kind of guy, but I don't hate them. Honestly, if you want to get real about it, I hate the Mets more. Yeah, Yankees fans can be arrogant sons of bitches, but at least their franchise has achieved something in the past, oh, 10 years; Mets fans are surly without having anything to show for it.

Is it bad that . . . I was really hoping last night that Shani Davis would slug Chad Hedrick after their speedskating race, then stand over him and say, "Fuck yo' bronze medal, white devil"?

Is it bad that . . . I think Arianna Huffington is a stone-cold fox, particularly for 55?

Is it bad that . . . despite my half-hearted attempts to advise and console, there's a part of me deep down that's gloating a little over the fact that Josh is turning 30 today, while I still have more than two and a half years to go? 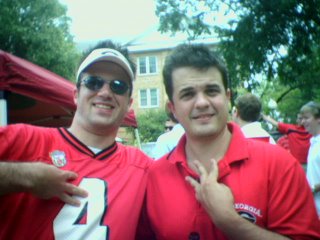 Me (at left, bevisored) and Josh in those more innocent days before his life came to an end. Oh, come on, I'm just kidding . . . happy birthday, douchebag!

By the way, ladies, yes, we're both single.
Posted by Astronaut Mike Dexter at 1:20 PM

Is it bad that I'm right with you on Arianna?

Have you seen that picture with her daughters? Yow.

But I do have to admit I'm closer to her age.

Mets fans may be surly (although I dispute that characterization), but you'd be too if you had to put up with Yankee fans and all their nonsense every day of your life. Yankee fans honestly believe that simply by virtue of the fact that the root for the Bombers, it makes them superior life forms. And most of these so called "fans" who rep the Yanks the hardest are bandwagon jumping douchebags who didn't give a flying fuck about the team until '96-- I have distinct memories of being at Yankee Stadium in the early 90's and being about 3 rows back from home plate, staring at Frank Thomas going "Dear God, that motherfucker is ENORMOUS!" because ain't nobody else goin' to the games back then.

I don't think anyone watches the NBA anymore. Why do you think the All-Star game is on TNT? (check out Jay Mohr's article on CNN/Sports today..."NBA All-Star weekend has become more unwatchable than Joe Dirt on Telemundo." Plus, that Meissner girl from Baltimore is cute as a button...can't help but root for her.

Yes, it's bad that you like the Escalade. Awful and ugly ride. I think I beat you to the small penis reference though (http://myliberalthoughts.blogspot.com/2005/06/thought-of-day.html#links). The Escalade should come with the bumper sticker "I Don't Really Have Any Money...I'm Faking It With My Pimp Ride".

Umm..Yankess suck, Hedrick is a dick, Huffington still hot (did well on Hanity & Hanity the other night as well...with Ann "I suck all that is beautiful out off this world" Coulter too!)...and as a recently turned 30-year-old, it's not as big a deal as everyone makes it out to be.

Umm, I like ice skating too. I like years like this where there's enough of them to go around and guys don't all have to argue over who gets to claim the one hot one.

You and Josh look so... I don't even have the words. What's the three-finger thing? The modified Shock?

Oh and hit up youtube.com and search for a highlight reel of this year's dunk contest... I hadn't watched one in years but daaaaayum. Serious sickness for real, playa.

I think I was doing "eastside" while he was doing "westside." Dude, I can't remember what the thought process was there. I think this picture was taken whilst tailgating before the Georgia-LSU game a couple years ago, so I'm just amazed I'm standing upright.

So I leave for a couple days, and the attacks get personal? I see how a brotha wants to play this. As for the picture, I honestly have no idea what the hell is going on there - but then again, I probably had no idea who I was at that point. Seriously, is that the whitest gang pose EVER?

"Seriously, is that the whitest gang pose EVER?"