Look, I love all you readers -- yes, both of you -- and the knowledge that I'm apparently bringing some element of joy to your lives is thanks enough for the work I do putting this blog together. Well, it was thanks enough . . . but now I want some stuff. And considering how badly you guys whiffed the last time I asked for stuff for my birthday, I figure that popping for some of the items on the following birthday list is the least you cheap schmucks can do. Especially given that my birthday is, hello, exactly two weeks from today. So pay f$#!ing attention!: 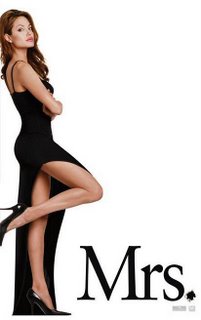 · The first item I asked for on my last birthday list was one of the life-sized Angelina Jolie stand-ups that Twentieth Century Fox sent out to movie theatres to promote "Mr. and Mrs. Smith" last spring. An example of which is pictured above. If you can look at that and tell me it's not the hottest thing ever, then congratulations, hope the monastery's treating you nice. Otherwise, buy/steal me one of these at your earliest convenience -- I'll even pick it up myself so you don't have to mail it! I mean, come on.

· One thing I'd really like to have hanging over my fireplace is one of those panoramic photographs of Sanford Stadium taken from the end zone (an example of which is depicted above). But what would be even awesomer than that is a painting (or print of same) of the "Prayer on the Plains," Michael Johnson's 19-yard touchdown catch that won the 2002 Georgia-Auburn game and clinched Georgia's first SEC East title ever. Obviously I know the first one exists; I'm not sure about the second. But either one will be a fine way of showing me you actually love me, as opposed to just being one of those people who says it but doesn't really mean it. 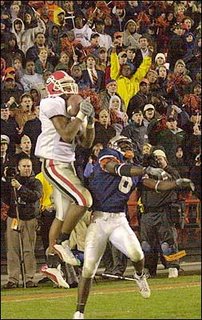 · Also, I still want a model of an Airbus A380, available here or here.

· A new driver's-side outside mirror for a dark green 2000 Volkswagen Jetta. If you must know, some assbag parked all crooked in the little area behind my building, I thought I could pull into the space between him and the telephone pole without incurring any damage, it turned out I was mistaken. Look, the motor still works, all I need is the mirror and the exterior housing; just buy me the parts and I'll even pay for the labor myself.

· A #1 Atlanta Falcons D.J. Shockley jersey. They're not actually selling those yet, but you can customize one here. (I want a red jersey with white numbers, just in case you were wondering.) 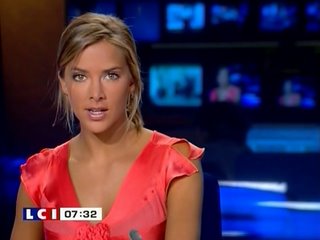 So there's your list. You've got two weeks . . . but what the hell, I know the mail runs slow and some of these can be hard to find, so I'll extend the deadline until Thursday, June 8, the day before I leave for New York for a week. But don't try and use that as an excuse to procrastinate or something. Get cracking!
Posted by Astronaut Mike Dexter at 8:51 PM

Email ThisBlogThis!Share to TwitterShare to FacebookShare to Pinterest
Labels: self-aggrandizement

Being an elderly and broke college student, I can only offer you this. Don't know if you heard it before, but figured you would enjoy it.

Coulter's Snatch by Hamell on Trial

What if I burn you copies of the Dixie Chicks and Rascal Flatts cds and you pay for me to send them to you? That counts, right?