I have a formal request (actually, probably several by now) from college football blogosphere Mayor T. Kyle King to get off my ass already and post some of the pictures I took at our abortive, but still fun, bloggers' tailgate before the G-Day game last month. I also have pictures from this past weekend's Do Dah Day festivities, so this is gonna be a two-fer picture post of Events I've Been To Recently. Two picture posts in a row? Yes, it's madness up in here. We begin with Blogger[sort of]palooza: 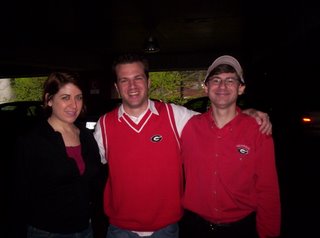 From left to right, Ann, me, and T. Kyle within the cozy confines of the North Campus Parking Deck. Not appearing in your picture: Kyle's cousin Travis, because he was the one taking it. 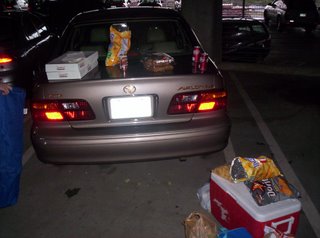 Our tailgate spread -- not exactly an RV-sized bacchanalia, OK, but you'll note 1) fried chicken, 2) two boxes of Krispy Kremes, and 3) a cooler full of beer. Looks like a fine tailgate to me. 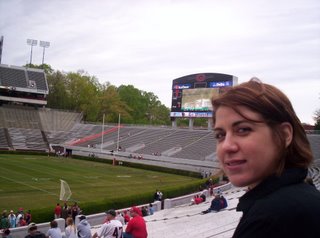 Baby Sis at the stadium right before kickoff. 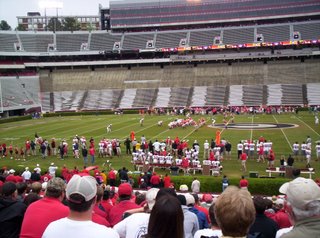 OK, you'd have to Zapruder the hell out of this picture to be able to tell for sure, but I think this is Matt Stafford dropping back to pass on his first play from scrimmage, which, as you'll recall, ended up a 64-yard TD pass. Big cheers from the crowd, most of whom were prepared to hand Stafford the starter's job right then and there. 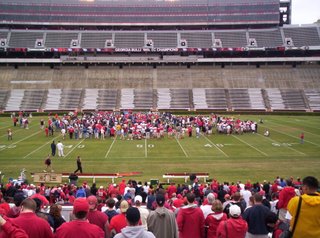 Postgame at midfield, the members of the 2005 SEC-title team get their championship rings.

And now for Do Dah Day: 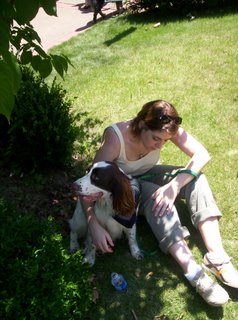 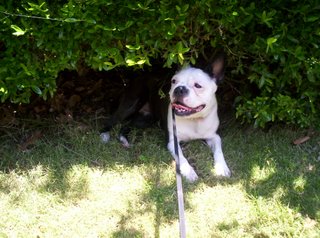 Jenna, enjoying some shade of her own. This is where she spent pretty much half the day . . . 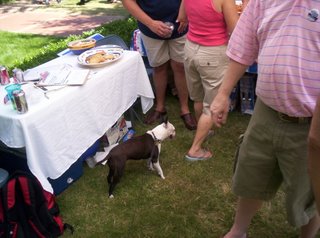 . . . and here she is nosing around for food, where she spent the other half of the day. 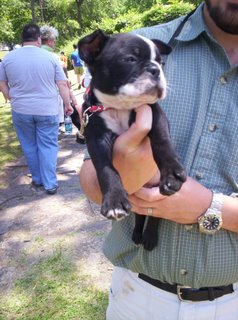 We saw this little Boston terrier puppy in Rhodes Park -- the owner said it was about 9 weeks old, and she was even smaller than Jenna was when I got her. 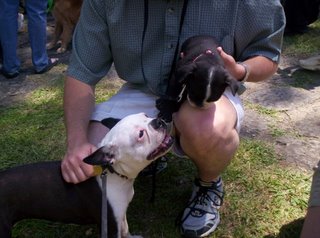 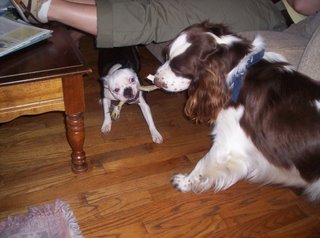 After three and a half hours in close-to-90-degree heat, both Jenna and Jake were pretty much exhausted when they got back -- or so one might think. But they only napped for about 30 minutes apiece before Jenna got right back to her usual M.O. -- annoying the shit out of Jake -- and this is the two of them playing tug-of-war with a toy that rightly belongs to Jake.
Posted by Astronaut Mike Dexter at 8:18 PM

Next time, a little digital enhancement, airbrushing, Photoshopping, or other artificial means for making me look slightly less like a complete dork would be appreciated, as well.

If I had any proficiency with Photoshop, I'd just be splicing George Clooney's face over my own in all these pictures. There'd probably also be a bikini-clad Alessandra Ambrosio cheering the Stafford TD pass in the G-Day game.