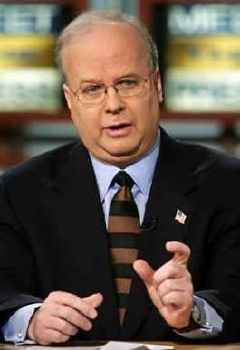 Aw, who'm I kidding? I love to ruin Karl Rove's day. I would ruin every single one of Karl Rove's days if I could. If I saw a position advertised on Monster.com for "Chief Day-Ruiner to the White House Deputy Chief of Staff," I would submit my application to that position with a résumé, a DVD, and about 100 references, and I'd call every damn day just to see if there was anything additional they'd like me to send. And I can't promise you I wouldn't offer to blow the HR person who interviewed me.

Here's what Unka Karl had to say today about George W. Bush's approval ratings, which were last seen limboing comfortably underneath a snake's belly:

Rove said that Bush's likeability ratings are far higher than his approval ratings. "There is a disconnect" because of the Iraq conflict, Rove told the American Enterprise Institute. (my emphasis)

To paraphrase a much better blog than this one . . . sadly, no! (Or if you're Melissa Theuriau and you're reading this, Tristement, non!)

Here you can find Bush's approval ratings as gauged by just about every such poll that's been taken since last September. And here you can find recent data on Bush's personal favorability ratings -- which, as Rove points out in what may be the one truthful thing he's said since he first got Bush elected, are distinct from approval ratings.

Aieee . . . a likeability rating even lower than his job approval rating? Why, that isn't what Karl told us at all!

OK, that likeability rating was higher than the approval rating, but far higher? Not quite -- not that I think Karl'd be bragging about 39% regardless.

So even in the one recent poll in which Bush's favorability rating exceeds his approval rating by a difference too big to be negated by simple MoE, he's got an unfavorable rating of 57%, nearly three people in five. Not exactly a ringing endorsement of Rove's declaration, in other words.

If that doesn't convince you, you can also go here to find out how many people think phrases like "honest and trustworthy" and "understands/cares about the problems of people like you" describe Bush. In each case, the numbers are either barely breaking into the 40s or relaxing comfortably in the 30s.

And here's a killer for all y'all hard-core right-wingers who insist that Bill Clinton's beejer from Monica Lewinsky is the root cause of September 11, high gas prices, and every other bad thing that's happened in the last six years: According to one poll, people even think Clinton was more honest than Bush.

Yikes, Karl. Keep your head down when you go visit Patrick Fitzgerald, m'kay?

ADDED: Wow, I didn't even have Rove's full comments. But Think Progress (link via Atrios) did, and they quote Rove as insisting that, according to the RNC, Bush's personal approval ratings are actually in the 60s. Well, I'm sure you can trust those numbers -- because the GOP has never been even remotely dishonest about anything, right?
Posted by Astronaut Mike Dexter at 6:24 PM