Now that I have a digital camera and can take pictures and everything, I know I promised I'd put more pictures of Jenna up on here, but today you get a double dose -- Amy brought over her Boston terrier, Ruby, the other night, and as usually happens when Jenna and Ruby get together, they immediately started rolling around on the floor and rasslin' each other like a couple of wild animals, only . . . well, a lot funnier. (Ruby's the one with the black face in the pictures, by the way.)

I don't know that I can truly paint you an accurate mental picture of two little Boston terriers fighting, but imagine the Ultimate Fighting Championship with midgets -- that's kind of what it looks like. 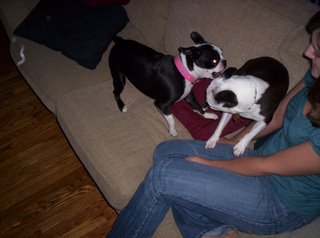 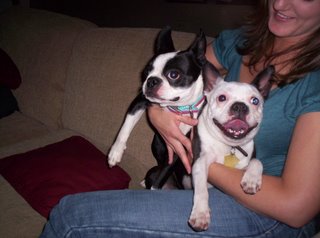 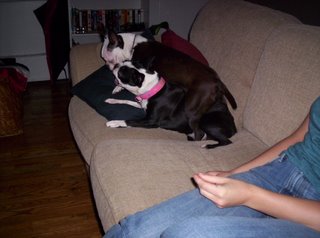 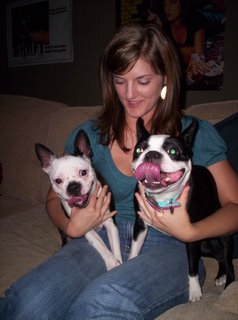 Anyway, Do Dah Day is tomorrow here in Birmingham, which, as with last year, should provide plenty more opportunities for canine-related tomfoolery and unrestrained treat-eating. (For Jenna, I mean, not for me. My treats come in bottles.)

Now for the I Couldn't Make This Up If I Tried Award of the week: Go to the Web site for the Competitive Enterprise Institute and watch their TV spot titled "Energy." This ad attempts to respond to the controversy over global warming by talking about how great carbon dioxide is. The spot's tag line? "CO2 -- We call it life." No, dude, I'm not making this shit up. Even though the ad really looks like it was produced by the same PR firm who produces public-service announcements for Montgomery Burns, trying to convince the people of Springfield that three-eyed fish are really a good thing. Courtesy of Washington Monthly, we have an out-of-the-park satire of the ad here, with plenty more top-quality snark in the comments here. (My favorite alternate tag line: "CO2: We call it life. No, really, go ahead -- put that plastic bag over your head.")

And finally, I hadn't planned on posting about this, but there was something about this on Headline News this morning and I couldn't let it go. The latest bit of evidence in the matter of The People vs. Britney Spears involves Britney allegedly almost dropping her infant son as she scooted out of the Ritz-Carlton in New York City. Now, I'm not saying that almost dropping your baby is a good thing, but I don't see why that's what's making headlines about this story. First of all, poor little Sean Preston being dropped or otherwise endangered has almost become a fact of life; it's pretty much accepted that Sean Preston is going to end up in a foster home, a body cast, or both before age five. But second of all, Britney, who is pregnant, nearly dropped her kid coming out of the Ritz because she had a goddamn drink in her hand! So she's going to curse her second child with fetal alcohol syndrome in addition to the damage already wreaked by her and Kevin Federline's tainted, malignant genes. I really do think if you looked at Kevin Federline's sperm cells under a microscope, they'd be wearing thick glasses and plastic helmets and would be running into each other as they pooped in their pants and wailed for the mommies.

For the love of God, state of California, put Sean Preston with a loving family, and while you're at it, put an undercover agent in the maternity ward when Britney pops out the second one so it can be whisked away to safety the minute the umbilical cord is cut. We can save these children!
Posted by Astronaut Mike Dexter at 7:57 AM

And Amy ain't half bad, either.

Boston Terriers are the prettiest specimen of dog ever bred by man. The end.

Who says Britney's drink was alcoholic? When I saw her at a club recently, she drank water all night - so as much as she deserves disdain for marrying that fucktard, I think her alcohol consumption is at least under control.

Also, I can't believe you dress your dogs in blackface. That's offensive.

Beware the Federpenis.....evidently it's stronger than the "Death Star" tractor beam in the first Star Wars.

I'm still trying to figure out if those CO2 is life ads are twisted jokes or real. They make it sound like someone could vote and suddenly... All the CO2 in the world would disappear, because its illegal. Police would ticket people for breathing. Kittens and puppies would be locked up at birth for increasing the CO2 levels of the earth.

Josh, I don't know -- if you look at the pictures, it looks like Britney's carrying some sort of cocktail glass, and who carries a glass of water outside with them, anyway? A bottle of water, sure, but the only time I've carried a glass outside is when it's booze and I want to enjoy its precious, precious nectar out in the open.

Hey, Doug, since you've obviously gotten your digital camera back, how 'bout posting some pictures from Bloggerpalooza?

Inquiring minds want to know, is all I'm saying.

don't know if you've ever been pregnant, doug, but we womenfolk tend to get a little clumsy when in that state. add to the mix a squirmy child, and it doesn't matter what one is carrying in the other hand, nearly dropping a kid becomes a real possibility. not that I'm defending her parenting - I'm certainly not - but New York has VERY strict and VERY specific open container laws, so while YOU may not carry water outside in a glass (I've had water served in squat glasses like the one she's carrying, BTW), it's not impossible.