A salute to one of history's greatest Dougs. 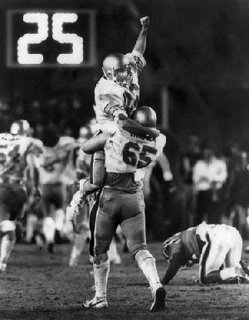 You know, if there's one thing I've learned in my almost-28 years, it's that there are only so many Dougs in the world, and thus only so many chances for one of us to make good. So when one of us does something awesome, we need to crow about it.

Thus I'm proud, not just as a Doug but as a human being, that Doug Flutie got to be the hero in the '84 BC-Miami game, and proud that after many years of trial and tribulation (and Canada), he got his shot in the NFL and made the most of it. Doug Flutie announced his retirement yesterday, but his contribution to football, and to Dougness, can never be forgotten. For bringing joy and pride to Dougs everywhere, Mr. Flutie, we salute you.
Posted by Astronaut Mike Dexter at 8:53 AM