The Texas Longhorns blog Burnt Orange Nation recently served up a trio of off-season roundtable questions to folks participating in the college football BlogPoll, and as someone who hopes to be a member in '06, I figured I'd give this a shot . . . so here are the questions, and my answers:

Which offseason story are you most tired of, and, on the flip side, interested in?

Honestly, I'm already tired of hearing how Charlie Weis is going to turn Notre Dame back into a powerhouse and make them the greatest dynasty to have ever taken to the gridiron in human history. No disrespect intended to my fellow Papists in South Bend, or to Weis in particular, who by all acounts is a genial, upstanding, guy, but the sportswriters and talking heads are going to be looking for a replacement for Southern California as they strive to re-assemble an OMG Most Awesomest Team Ever storyline, and I've got a sneaking suspicion that Notre Dame is who they've picked.

You could see the groundwork for it being laid last season, when some of the folks at ESPN were ready to call the Notre Dame-USC game the greatest game ever almost as soon as the clock hit 00:00 -- it was a good game, no doubt, but to call it the greatest game ever was more than a little bit absurd. It was a win-win situation for the Irish, though, because if they'd won, they would've automatically been hailed as giant-killers and picked as a mortal lock to go to the Rose Bowl; and even in the loss, they played USC way closer than expected and thus got to be the recipient of the "watch out for these guys in 2006" accolades. Since then we've seen them beat out Oregon and Auburn for a berth in the Fiesta Bowl, where the media hype machine continued churning unabated (and gave us the embarrassing Laura Quinn spectacle), and almost every recruit they sign, from the laughably coiffed Jimmy Clausen to some wide receiver I'd never even heard of, gets written up on ESPN.com and a bunch of other places. It's not that I hate Notre Dame, certainly not the way a lot of people do, I just don't buy into the idea that any team, whether it's the Irish or the Yankees or the Cowboys or whoever, gets to be anointed as "America's Team" based on stuff they did decades ago and thus we all have to accept them being shoved down our throats. 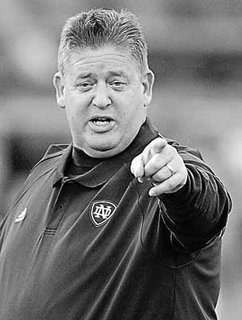 What I'm most interested in -- even though there are some who might say that Urban Meyer's Sooper Geniusness is being shoved down our throats every bit as obtrusively as the Notre Dame ascendancy storyline -- is seeing whether Meyer's spread offense can overcome some of its growing pains in Year II at Florida and start achieving the kind of success it did at Bowling Green and Utah. Obviously, as a fan of a team that has to play the Gators every year, I'd prefer it if Meyer's offense didn't become too prolific in Gainesville, but it'll still be an interesting process to watch, and it seems like there's a lot riding on this will-it-or-won't-it question, not just for the Gators but for college football in general. If the spread blows up like the Godfather in Gainesville, you could see a lot of teams shifting over to it in the near future, hoping to replicate Meyer's success; if it doesn't, then the shift to West Coast/spread-style offenses you've seen not just in Gainesville but in places like Lincoln and South Bend could be dealt a setback. I don't really have a dog in that particular fight, so I'll just be sitting back to see what happens.

Other storylines I'm kind of interested in: With Leinart, Bush and White gone, will somebody else win the Pac-10 for a change? Will Steve Spurrier's second year at South Carolina build on the promise of his first, or will he discover unequivocally that this isn't the SEC he left in 2001? And is the ACC really going to be a "superconference," or just 12 teams not really worth caring about all that much? Virginia Tech, Miami, and FSU were all expected to be the ones to lift the ACC to powerhouse status in its first year as a full 12-team, two-division conference, but all found high-profile, extremely embarrassing ways to screw up in '05 at various points. Somebody's got to win the conference championship, but whether that team ever so much as sniffs a shot at the national title is another matter.


Your head coach comes down with a mystery illness and has to step aside. You get to hand pick the replacement for the 2006 season. Who gets your vote?

I get to pick anybody? Hmmm . . . well, given that the Georgia football outlook for 2006 appears to involve breaking in a new QB whilst relying heavily on a loaded RB corps and a murderous D, the logical person to steer the ship would be Tommy Tuberville -- but like Kyle King, I'd rather disembowel myself with a table saw than voluntarily cheer for Tubbs. Not really crazy about making Jim Tressel a Bulldog, either. In the end, the college coach I'd probably pick first is Oklahoma's Bob Stoops. But then again . . . the BON guys never said my new guy has to be selected from the confines of college football so why not bogart somebody from the NFL? First choice there would be Joe Gibbs, but then he wouldn't be coaching the Redskins anymore, and that would suck, so . . . I'd go after Bill Cowher, coach of the Pittsburgh Steelers. He's managed to go pretty far with a run-first offense -- even won a Super Bowl recently, or so I hear -- and it's not like he doesn't have plenty of experience coaching Bulldogs. 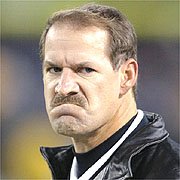 Slap a Georgia cap on him, and this look would make Phil Fulmer crap his pants.

Lastly, we'll mix the football and the blogging together here. If you could have anyone switch allegiances and start covering your team, who you gonna pick?

Well, Mayor T. Kyle King said it would be a loss for the sports blogosphere as a whole if the guys at Every Day Should Be Saturday restricted themselves to a single team. I say fuck the rest of the sports blogosphere -- adding Orson Swindle and Stranko Montana to an already loaded list of dedicated Georgia bloggers would be like recruiting Reggie Bush onto a team that had already signed Vince Young, A.J. Hawk, Adrian Peterson, and Leonard Pope. ("Which one of those are you, Doug?" you may be asking; why, none of the above, dear reader -- I'm Billy Bennett, the plucky, spot-on accurate kicker. I may not be the most imposing physical specimen, but I'm clutch, baby.) Except I'm pretty sure that Orson and Stranko have never been invited by an agent to live rent-free in a three-quarter-million-dollar house. But anyway, when I finally take home a nine-figure jackpot in the Mega Millions lottery, right after I offer UGA $25 million to change the name of Sanford Stadium to Sanford Field at Doug Gillett Stadium, I figure I'll offer the EDSBS guys each a Bugatti Veyron to renounce Florida and switch their allegiances to the red and black. Then it's off to St. Bart's for a year or two. 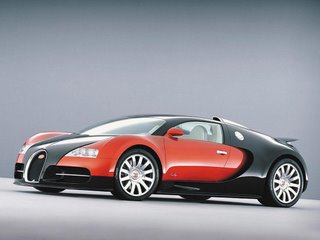 Red and black, of course, with 1,001 brake horse power for those moments when you've really got to make it to a rest area.
Posted by Astronaut Mike Dexter at 8:23 PM

Dang...you beat me to Bill Cowher as UVA coach. Mostly because we got a bowling ball/speed ball RB combo, a bunch of TE's and some WR/QB hybrids, I think we could work as a Steelers-type team. Plus, we love our uncharismatic coaches around here.

It never occurred to me to look outside the college ranks, so I suppose I was internally limiting the universe to college coaches. But that seems arbitrary and I'm glad you looked outside for help.

As a diehard Steeler fan, I can nod approvingly at your choice.

Nice answers all around.

Splendid suggestions all round, except for the bit about someone else winning the Pac 10 for a change. I am hoping that the scandals drop off by mid-July so that the OMG best team ever stories pick up steam and it takes until mid-season for the "what happened to USC" stories to pick up steam...

As for your fleet of Veyrons - 3003 raging horsepower of Dawg themed speed - I say damn the icecaps, full speed ahead!

1,001 horses, for when you really need to make it to Jupiter three years ago.

Fortunately, you haven't won the lottery, since we'd turn ourselves into a smear of herring paste on the highway in a vehicle like that.

Thanks for the kind words,