Guy #1: Hey, we've got our apartment. We ripped up the floors, pipes, wiring, and having everything completely redone.

Here's the thing: I actually agreed with a lot of what President Bush said last night in his prime-time speech. Tougher measures against employers to make sure they don't hire illegals? Fine with me. Guest-worker program? No argument here. Eventual path to citizenship for the illegal immigrants already in this country? Might as well, since there's no way in hell we can dump 12,000,000 million people into our prisons or round them up and truck them all back to Latin America. National Guard troops at the border? Well, fine, if you can find any who aren't in Iraq or scheduled to be there really soon.

All that said, though, it was a monumentally stupid move for Bush to have made that speech. The only people raising a truly huge stink about the immigration issue -- aside from the actual immigrants protesting in the streets -- are the hard-core right-wingers and straight-up racists who want to see every illegal in this country either thrown in jail or sent back to Mexico (or wherever). And when you get right down to it, those are the only people whose minds Bush really could've changed with his address. The moderates and progressives might've liked the proposals Bush outlined, but after the debacle in Iraq, the Hurricane Katrina fiasco, and the NSA phone-records blowup, those moderates and progressives have already made up their minds that Bush is a loser, and after a record of fuckuppery like that, it's going to take a lot more than a sane stance on immigration to change their minds. The right wing, which, as has been pointed out, is really one of the primary forces driving Bush's approval ratings lower than anyone ever thought they'd go, wanted to Bush to propose a major, head-knocking crackdown on illegals. And Bush didn't give them one, and that's going to piss them off. Basically, Bush's speech was tailored (intentionally or unintentionally) to appeal to a group of people who wouldn't give him the time of day no matter what he said; the general public and, more importantly, the Congressmen he really needed to get on his side appear roundly unconvinced.

So why did Bush stick his neck out and give this speech at all? Who the hell knows. Maybe Rove really is losing his Midas touch. Maybe Bush decided there's no way he's going to push his approvals back above 50 percent and grow some coattails in time for the midterm elections. Either way, this speech struck me as an extremely BAD IDEA. 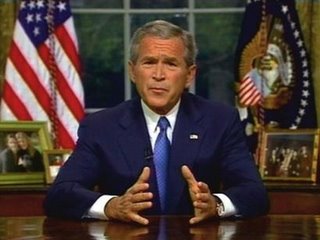 Not to disagree with you, because I don't. But the Chicago Tribune sported the interesting stat today that 90-ish% of the Army National Guard is actually still kickin' it stateside. I can't seem to find the nifty pie-chart in the electric edition of the Trib, though, sorry...

I disagree with the fact only hardcore righties and racists are paying attention to this issue. Trust me, I work in a primarily Hispanic school (with multiple illegals in my class), and I spend my free time hanging out with mostly middle-of-the-road whites, not a hardcore rightie or racist among them.

EVERYBODY is talking about this issue right now, and EVERYBODY has or is forming an opinion.

I didn't say only hard-core rigties and racists were paying attention to this issue. What I meant was that (at least as far as I've been able to ascertain) only the hard-core right-wingers are focused enough on immigration for that to be their single issue when they go to the polls in the fall (or to determine whether they go to the polls). Plenty of people have an opinion on this subject, no doubt, but for most of the people on the left side of the spectrum and even a great deal of moderates, this is just one of many issues they'll be taking into account in addition to Iraq, the economy, health care, et cetera. Immigration by itself is not a deal-breaker for them, in other words -- but for a lot of right-wingers, it's starting to look like it is.

And I should have also said I agree with the other part of your post - I don't get the point of the speech from a political point-of-view. He's never going to succeed pandering to the left, and the speech just pushed his base farther away. Of course, and I like to still give him the benefit of the doubt once in awhile, maybe it was a speech about what he really felt and it wasn't poll-driven........ Ok, that's not true.

Bush is just trying desparately not to hand the Latino vote to the Democratic party for the next 50 years while not pissing of too many Republicans. I don't think he could come out with anything hardcore enough to win any significant points with the mouthbreathers in his own party. And Bush's stance on immigration has always been far closer to Ted Kennedy than Tom Tancredo. It hasn't stopped the far right from voting for him in the past.

This whole manufactured debate about immigration will be fairly unimportant by November in my opinion -- it was just brought up to distract from hookers and indictments. There's not enough drama to sustain it for that many news cycles. Now if an illegal immigrant kills a good-looking white woman or something...