How do you solve a problem like Moussaoui?: A modest proposal. 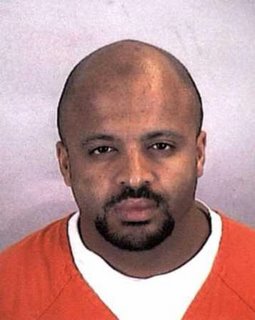 A member of al-Qaeda? I didn't even know Ashy Larry was Muslim!

On the one hand, I don't think the world would be even the slightest bit worse off without Zacarias Moussaoui. Just because I'm staunchly anti-death-penalty doesn't mean I've never looked at a guy (I'm thinking folks like Kevin Underwood, John Couey, etc.) and thought, "Well, if they decided to gas this guy, I could probably look the other way." So I can sympathize with some of the 9/11 victims' family members who are pissed because Zacarias Moussaoui didn't get the death penalty.

But on the other hand . . . well, I am anti-death-penalty, and I can't think of a better example than the Moussaoui case of the kind of situation where the death penalty wouldn't bring nearly as much closure to the victims' families as they think it would. Or to the rest of us, for that matter. Sure, we could flip the switch on him and then gloat for maybe a day or so about how we'd just iced the last living 9/11 plotter, but at the end of the day we'd know that a) he wasn't really the last living 9/11 plotter, not by a long shot, and b) he probably didn't have that much to do with 9/11 to begin with. This is a guy who was effectively booted off the 9/11 operation for being a fuckup and who apparently couldn't even process enough about operating an airplane to be able to fly one into a building. We're not talking criminal mastermind here, in other words, and it's not going to do us a lot of good to imagine otherwise.

Still, there's got to be something we can do that's short of execution, yet worse than prison. My friend Chris had the perfect idea a while back, and while he's probably not the only person in the world to have ever thought of it, here it is anyway: Give Moussaoui a sex change. Turn him into a woman and then fly him out to Teheran or Islamabad or Kabul or wherever, throw a chador on him, and dump his ass out on the street. Then say "bye-bye" and leave him to live out the rest of his life as a woman in the kind of Islamic fundamentalist theocracy he apparently craves. He'll be a freak, so the radical Islamists won't want him back, and he'll have to live out the rest of his life in conditions that, in a lot of ways, are worse than prison.

Using state-of-the-art computer-aided design technology, I was able to create a composite portrait of what Moussaoui might look like as a post-operative transsexual: 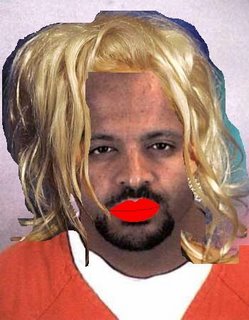 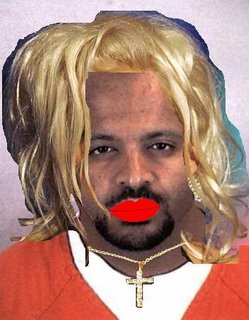 Ahh, yes. If the freakish she-male appearance wasn't enough to make him a complete outcast, the Judeo-Christian bling should finish the job. Better get a burkha quick, ese!

I was also able to apply this technology to give an idea of what Osama bin Laden (about 6'5", 160 lbs.) would look like after the same treatment. Here's Osama as he looks currently: 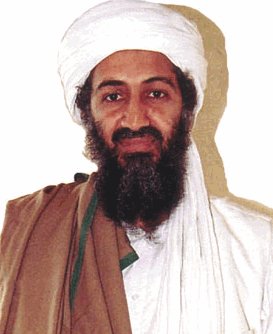 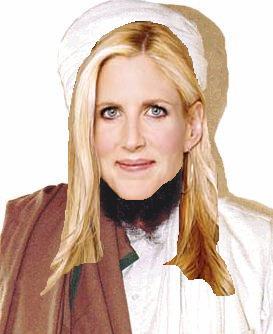 Eesh. Well, there are still some bugs to be worked out, but you can kind of see what I'm getting at here. What say you?
Posted by Astronaut Mike Dexter at 7:18 PM

Email ThisBlogThis!Share to TwitterShare to FacebookShare to Pinterest
Labels: miscellaneous stupidity, modest proposals, war what is it good for absolutely nothin

That doesn't work at all -- OBL has a much less prominent Adam's apple.

Didn't that guy in the first pic do a Burger King commercial for the tender crisp bacon cheddar ranch sandwich last year?

And I think the boys of South Park discovered that OBL has a much less prominent penis as well.

Well, I know one way we could punish him: force him to eat tender crisp bacon cheddar ranch sandwiches for every meal, 24-7. With extra bacon.

You need to warn a guy when you're going to spring a Coulter picture on him.


Good to see you're still not above the easy snark shot.

I'm only in favor of the death penalty if some social deviant kills my Mother, Dad, Son, Daughter etc. If he kills someone you love then I'm a compasionate bleeding heart Liberal like you.

By the way, treating a prisoner like you are suggesting is what you demos have been giving out military hell for, right?