A belated anniversary celebration, and an even more belated thank-you. 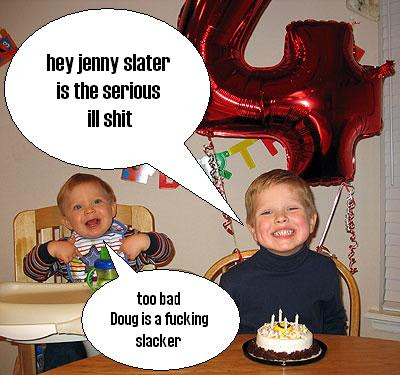 So I was coming home from a weekend trip up to Huntsville -- which was lovely, by the way -- this afternoon, when I realized something: This blog turned four years old on March 7 and it totally went right by me. Didn't mark the occasion with so much as a commemorative post or even a commemorative toaster thrown from the balcony. So here I am, 15 days later, finally marking the occasion. Some parent I'm gonna turn out to be.

But instead of doing my usual self-aggrandizement job or reveling in the aroma of my own metaphorical farts for a while, I'm going to take some time out to extend some thanks -- to you, the readers. Yes, I write this blog, but you, the people who read it regularly and hang on my every word and help build up those nice checks that Google sends me every few months -- you guys are the real heroes. So thank you for taking time out of your day to read this spew, and there are a few groups of you to whom I'd like to give special thanks:

· The folks who wished me well and checked in on me when I was recovering from the back surgery I had at the beginning of this month. I hope nobody worried too much, because it wasn't that serious -- certainly not life or death -- but it was still nice to know that y'all are thinking of me. Just so everyone knows, the cyst on my back was removed, the scar has been healing nicely, and now I can get on to whatever embarrassing health problem awaits me next.

· The people who were kind enough to donate at my behest to Magic Moments' "Magic Mile" fundraising campaign over the last few weeks. That campaign started out as something where we were going to send direct e-mails to friends, co-workers, and family to solicit donations, but I went ahead and threw a note about it up on the blog just on the off chance that a reader or two might be able to throw us a couple bucks -- and you know what happened? I ended up getting way more donations from the blog solicitation than I did from those direct e-mails. (If you're a friend or family member who got one of those e-mails but hasn't donated yet, you may feel free to interpret that as an AHEM aimed very pointedly in your direction.) Seriously, that touched my heart in a big way, guys, and I can't tell you how much your generosity is appreciated not only by me but by the entire organization, not to mention all the sick kids whose wishes we're going to be able to grant this year. Just so you know, if you're still interested in making a donation, you can do so at this link, and the campaign "officially" runs through this Friday. So thanks to everyone who's already donated, and a pre-emptive thanks to those who are about to.

· The blog aficionados who followed me over to Dr. Saturday as I guest-blogged there while the good Doctor was out of town on vacation. Y'all are great, even the commenter who told me I should "just kill [my]self and stop using up resources useful people could be using." Hell, especially that guy. The knowledge that I can still annoy people that much with only a minimum of effort is almost as big an ego stroke as the actual comments I got that week.

· The folks who linked the increasingly infamous Ayn Rand flaying on Fark.com's political section. Even if you hated it, guess what, thimbledicks, you still read it, and that still put some extra change in my pocket. Which I think I will use to go out and buy a copy of The Militant this week. 'Preesh!

But in all seriousness, thanks, everyone, for making the past couple weeks even more rewarding for me than usual. And when this anniversary rolls around next year, we're blowin' this bitch up for big Number Five, promise.
Posted by Astronaut Mike Dexter at 8:02 PM

Email ThisBlogThis!Share to TwitterShare to FacebookShare to Pinterest
Labels: actual useful information, administrative crap, blogs that are better than mine, self-aggrandizement, you can't return this jacket for spite

Thanks for the hard work and hilarity, Doug.

A friend of mine (who is a big Baltimore Ravens fan, and reads a similarly snarky and ironic blog written by a few guys up in Terp country) asked me a week or two ago why we read blogs like this. My answer was "because we don't really have the chops or the perseverance to keep our own blogs going with funny and fresh material, so we're relegated to continuously checking blogs that we WISH we could write, and then overwhelm the creators with links and praise, fishing for shout outs and essentially saying 'Look! I'm cool too!"

He laughed, because it's true. Keep it up.

Congrats on another fine year!

Thanks for good times. Can't wait to see you you drop a number 5 next year.

Just as long as you don't drop a 26 (also known as UT's next big recruiting gimick next year--Coach O will take his pants off, for a change, and produce a regulation football for the kids--in an unorthodox manner.)

All kidding aside, the Volunteers are not far away from equipment-based-sodomy-related recruiting. Also, you've got one helluva blog. I enjoy it as much for the political content and random philisophical musings as I do for the football and dead-on humor. I bow before you, great work.