Oh look! I have a new least favorite NFL team this morning.

Well, no, not really, the Dallas Cowboys will always be my number-one hate target with extreme prejudice, but that coveted #2 spot now belongs to (drum roll, please) the San Francisco 49ers, who supposedly will not be drafting Matt Stafford next month because he . . . doesn't like to talk about his parents' divorce:

Niners head coach Mike Singletary told KNBR (680 AM) in San Francisco this week that “if you’re going to look at drafting a guy in the first round, and you’re going to pay him millions of dollars, and asking him about a divorce about his parents, if that’s going to be an issue, uhhh, then you know what, maybe he doesn’t belong here.”

Not that I'm some player-evaluation expert or anything, I think I'd put that just below "Says 'to-mah-to' instead of 'to-may-to'" and right above "Hangs his toilet paper over the back of the roll instead of the front" on the Master List of Dumb Reasons Not to Draft Someone. I mean, does Singletary think that, say, Darnell Dockett is going to be standing across from Stafford on the field growling, "Your parents must not have loved you very much if they weren't willing to stay together, rook"? (I mean, I might do that, but for me trash-talking isn't about actual intimidation, it's about the art, man.) 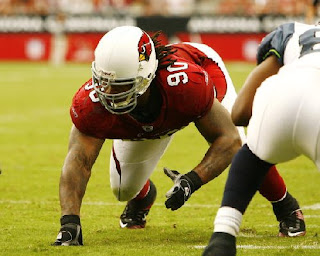 Your parents split up because you CRIED TOO MUCH, rook!

Furthermore, if the story linked at The Sporting Blog is any indication, the whole thing wasn't even "an issue" with Stafford in the first place:

The 49ers interview, conducted by a team psychologist, struck Stafford as odd. His account: When the psychologist asked about his parents, he explained that they were divorced when he was in high school and that he'd adjusted well; told he sounded as if he might have unfinished business concerning the divorce, Stafford said there certainly was not. "I felt like, I wonder how much I'm being charged per hour for this?" he says. "But I understand. They're going to pay a lot of money in the first round."

So that's that, I guess. Wherever Stafford ends up going, it won't be San Fran. Fine with me; your loss, Singletary. Have fun picking between Shaun Hill and Alex Smith, jackbag.
Posted by Astronaut Mike Dexter at 12:53 PM

Email ThisBlogThis!Share to TwitterShare to FacebookShare to Pinterest
Labels: football, people and things that are dead to me, stupidity

People who put the TP going over the back should be forced to watch the entire M. Night Shyamalan catalog then hanged, drawn, and quartered.

OMG! You've got to be kidding me? Singletary actually said that? What an idiot! You are right though. His loss!

As with voting, being a jerk does have consequences.

Sports is a reality-based community that is anchored entirely in logic. 2+2 doesn't equal 5. If you jump out a window, gravity isn't a theory anymore. And not being able to see talent when its in front of your face is idiocy. Any coach, GM or owner that stupid isn't going to keep his job very long. How long do you think Michael Vick is going to stay unemployed?

Good luck, Mr. Singletary. I hope you enjoy being 4 and 12 this season.

The way the coaches and management of the 49er's have driven that once great team into the ground over the last 20 years or so Stafford should just count his blessings on this one.

Yeah, Zen is right. The 49ers is the last place Stafford should want to be.