Bracket that ass up. 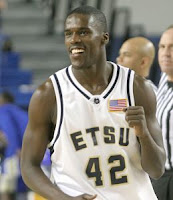 Some of you have probably been sitting there today thinking to yourselves, "Gee, I'd really love to compete in an NCAA tournament pool this year, but I'd feel a lot better about my odds if I could enter one run by somebody who knows nothing about basketball whatsoever." Buddy, have I got a deal for you!

The Big Ass Tourney Pick 'Em Group, the official online bracket competition of Hey Jenny Slater, is once again open for business. If you want to join up for a chance at schooling the rest of us retards, go here and enter Group ID number 115110 and password "radford" (all lower-case); then all that's left for you to do is to fill out your bracket. And with Georgia not even in the same metaphorical galaxy as the field of 65 this year, your job will be even easier, as you won't be confronted with the loyalty-to-Doug-versus-actual-recognizable-logic dilemma that I'm sure was such a stumper for so many of you last year.

I will say this, though: Two squads that were once "hometown teams" for the Gillett clan earlier in my life have made the field this year as 16 seeds, and I'm telling you right now, one of them's finna make history by punking a #1 this week. So if you pick all the #1s to roll, you're going to look back on what I just told you one day and weep.

Lecture over. Go forth and be smarter than everyone else.
Posted by Astronaut Mike Dexter at 2:31 PM

If a #1 seed gets punked on the first game, I'm hoping it's Conneticut by the hands of my mighty UTC Mocs.

Agreed, I'd love to see my current-town Mocs take out the Huskies. But it ain't gonna happen.