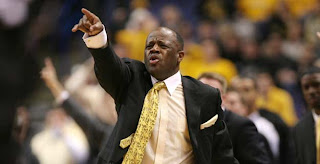 The dominoes set up by the firings of Dennis Felton at Georgia and Mike Gottfried at Alabama are a-fallin', and today comes news from Mark Schlabach that Missouri coach Mike Anderson, fresh off a 31-7 season, a Big 12 tournament title, and a trip to the Elite Eight, now has an offer on his desk from UGA. Supposedly we're offering to dump $2 million a year in his lap, a major jump up from the $1.3 million Missouri is offering in the five-year contract extension the Tigers plan to offer.

Is that a lot of money? You bet, particularly for Georgia, given that the total $14-million deal (over seven years) would be, according to Paul Westerdawg, equivalent to all the money we've paid our basketball coaches total over the last three decades or so. But is it worth it? As someone who's had numerous opportunities to view Anderson's teams in action over the past few years, I say yes, with an option to bump that up to a hell yes sometime in the future. 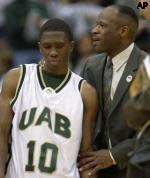 Anderson got to UAB about the same time I did in 2002, and over four seasons with the Blazers, he took us to the postseason every time -- the NIT in his first season, where we advanced to the quarterfinals, and the Big Dance his three other seasons, including a run to the Sweet 16 in 2003-04 (in which we knocked off Washington and #1-seeded Kentucky to get there). He implemented a fast-paced style that became known well beyond the Birmingham city limits as "40 minutes of hell," assembling an 89-41 record before heading to Missouri after the end of the 2005-06 season.

And most of this was accomplished before the Big East raided Conference USA for most of its top basketball programs, meaning Anderson was winning despite having to compete against Rick Pitino, Tom Crean, Bob Huggins, and, of course, John Calipari. After starting off his UAB career 0-4 against those guys, he went 7-6 the rest of the way. The Blazers didn't dominate C-USA, but they were consistently competitive.

And now he's emphatically turned around a Mizzou program that Quin Snyder had turned into a disaster area both on and off the court. So yes, Bulldog Nation, he is worth it. The challenge now is to see whether we can outhustle Memphis for him; Memphis may play in a lesser conference, but the basketball program is their athletic department's main energy source and they'll certainly be prepared to bring in their usual truckloads of corporate cash from FedEx and whoever else to try and lure him in. But the fact that Damon Evans has already put such a big offer on the table is an encouraging sign that we're taking our men's basketball program seriously for the first time in a long, long while.

I'll be following this with interest, and I hope like hell we get him -- and if you're even a casual fan of Georgia basketball, you should, too.
Posted by Astronaut Mike Dexter at 1:58 PM

I have always loved the "better know a candidate" theme. We even coopted at 3SIB for the UT coaching search. Great minds think alike.

I think Mike Anderson would be a phenomenal hire for you guys. He's a great coach.

Anderson is the real deal, and for that reason I hope you guys don't get him. I don't want my team to have to compete against him every year. Besides, if he comes back to the SEC, it should be to the place he belongs: Fayetteville, AR.

"40 Minutes of Hell" was a phrase coined by Nolan Richardson, under whom Anderson was an assistant for 17 seasons at Arkansas. He also played for him at Tulsa. Watching Anderson's UAB and Missouri teams has been like watching the Hogs from the good ol' days... circa 1989-1995.

Don't get me wrong, I'm a big fan of John Pelphrey and think that, with time, he's going to get it sorted out. But if UK can't close Calipari... or Izzo... or Pitino... or Ford, and they hire Pelphrey away from us, we better go directly to Columbia, MO, blank check in hand.

(Second paragraph, first sentence: Is it whom or who? Help, Doug.)

And he decided to stay at Missouri for $700,000 a year less than what Georgia was offering. Nice.