Tuesday Mystery Meat will stop the world and melt with you. 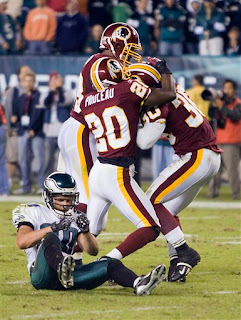 • It's entirely possible that the Iggles are going to suck this season, but even if that turns out to be the case, last night's win by the Redskins in Philadelphia was a big deal. This is a team that, with the exception of the breakout 2005 season, had lost its last nine to Philadelphia by an average of 15 points (and, incidentally, was only 3-7 on Monday night this century). Yet last night they looked really, really good -- the defense played well (at least until they started going all prevent-y in the fourth quarter), and Jason Campbell, whom I'll freely admit I was not high on when the 'Skins drafted him in 2005, had the poise and the icy stare of a veteran under center. They built a second-half lead and, instead of barfing it up like they did repeatedly last year, held on for the win.

I know I'm probably jinxing the 'Skins big-time by getting this worked-up about it, but what I think was the pivotal play in the game -- and may turn out to be the pivotal play in their season -- came at the very tail end of the first half when Washington drove down to a first-and-goal at the Philly 2. Delay of game, false start, false start, so now it's first-and-goal at the 17 with fourteen seconds left, Joe Gibbs is looking like he just wants to say fuck it and kick the field goal, and I'm thinking, Great, same old 'Skins are back. But then Campbell launched a beautiful 17-yard TD to Cooley on the very next play, and I was more excited about the team than I'd been probably since I was in grade school and the 'Skins were assembling their three-Super-Bowl dynasty under Joe Gibbs's first reign. 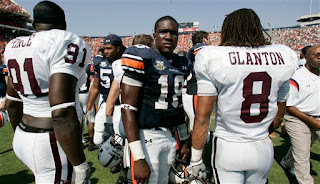 Kodi Burns: Came into the 2007 season a boy, will apparently leave it a man.

• In the storied annals of Most Unintentionally Funny Innuendo Uttered By A Sports Commentator, we have a new entry, uttered by a gentleman on JOX 100.5 this morning who was discussing what's going to become of Auburn's offense in the wake of their disastrous rotating-QB loss to Mississippi State last weekend. I don't remember his name but he was talking about the possibility of true freshman Kodi Burns replacing Brandon Cox as the starting quarterback; he said that Burns hadn't been called upon to execute Auburn's full offensive package against MSU because he didn't really know the playbook yet, but added that "his package is going to expand" from here on out.

Yes, his package is going to expand, but isn't that just part of growing up, both as a quarterback and as a man? Pretty soon he's going to start thinking about girls and growing hair in funny places. 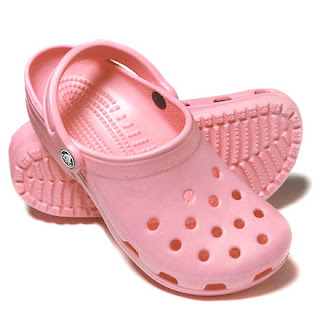 Don't let the sweet pink hue fool you -- these shoes want you dead.

• I don't know if this technically qualifies as a "Darwin Award" nominee, since it doesn't really involve willful stupidity per se, but honestly, is humanity's gene pool really missing anything if it loses a guy who gets killed in a fight with a man with no arms?

• Finally, ESPN's "College Gameday" is going to be in Tuscaloosa this weekend for the Georgia-Alabama tilt, and the shit is getting serious. I believe I remember reading somewhere that we're getting Mike Patrick and Todd Blackledge as the announcing crew -- does that mean we also get Erin Andrews on the sideline? Or does anybody know? If so, I may need to bring Jenna the Wonder Terrier along for the ride, because if the Oklahoma State game was any indication, the ladies can't resist a Boston terrier in a football jersey. 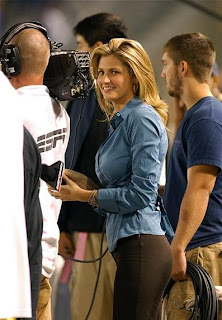 Many have tried, Ms. Andrews, many have tried . . . none have succeeded.
Posted by Astronaut Mike Dexter at 1:13 PM

You mean, it's not funny enough that Auburn is replacing Cox with Burns? That sounds like, I don't know... gonorrhea?

Hail to the Redskins! Great game last night...though I did clench my fist so hard last night when Campbell missed the game clinching bomb to Moss that I turned the Sweet Tart I was holding into a diamond. I am positively giddy just thinking about watching Taylor and Landry punish wide receivers going over the middle for years to come.

It's Holly Rowe on the sideline, not EA Sports:

Based on my experience attending games involving UGA (well, most any SEC/southern ACC schools), shouldn't Jenna always be brought along?

Holly Rowe instead of Erin Andrews? Isn't that like getting socks on Christmas when you asked for a Super Nintendo?

Dude she is hotter than the sun itself. She's the college Suzy Kolber.

Erin Andrews - the hottest woman man has ever created.

By the way, we'll be in Birmingham Friday night. I expect you to have the entire town waiting for me with open arms.

According to Awful Announcing (they do good work over there)... Georgia @ Alabama (ESPN, 7:45) - Mike Patrick, Todd Blackledge, Holly Rowe

I know you and your readers won't believe this, but I have has a chance to be in close physical proximity of EA - okay, about ten feet - but honestly, at that range, she didn't impress me as being as hot as I had thought before.