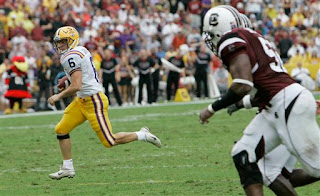 In the wake of LSU's 28-16 win over South Carolina on Saturday, my uncle had an interesting question for me while I was finishing up my laundry this evening.

So the most eye-popping play of the game was the fake field goal LSU executed to absolute perfection toward the end of the first half, with quarterback/holder Matt Flynn flipping the ball over his shoulder to kicker Colt David, who ran it in for a 15-yard score. It was a thing of beauty, with the announcers even marveling at how well Flynn had sold the fake by planting the ball and everything before he no-looked it over his shoulder to David.

If Flynn planted the ball, and his knee was down -- as you'd think a holder's would be -- wasn't the ball downed at the 22?

The knee's on the ground, the ball's on the ground . . . does anybody know the exact rule here that would explain why it's not first and 10, South Carolina, at the SC22?

(Either way, when they make the movie about this, I think it's pretty obvious from this clip that Joe Don Baker is going to play Les Miles. I mean, come on.)
Posted by Astronaut Mike Dexter at 9:04 PM

The holder is not down if he catches the snap with his knees on the ground, as long as there is a player in position to kick the ball. It is not required that a kick actually be attempted. So once the holder has the ball he may place and hold the ball for the kicker, OR:
NCAA: He may pass, handoff, etc. from his knees--or he may rise to advance, pass, handoff etc.,

There's a thread about this at an officiating site as well:

Gerry's right, with one important caveat - the holder's considered down if a player is no longer in position to kick the ball. One could make the argument that once Colt David started running to the right, Flynn should have been whistled down.

Essentially, it's kinda' a murky rule.

Loved him in "Mitchell".

The play that most interests me in that game was the choice to kick a 23 yard field goal with 7:44 left by Spurrier, with his team down by 21. What does the 3 points help, especially that close to the end zone???

Either one of two things happened:
1.He had money on the game. The line was between 18 and 16 points. FG there and then another one and he beats the spread.
2.He was trying to make the final score look closer than the game really was, when he knew they were going to lose...so kinda like running score up to make voters like you more - he was trying to run the score down to gain the same.

Whatever it was, it was a bad call - especially if he forgot how much time was left or how much he was down by or if he didn't think they could score a TD from 6 yards out or however close he was. To me, you try to score a TD and go for the onsides kick and try to win the damn thing...not just make it look more respectable. This coming from the same guy that used to "run his offense" at UF late in the game (meaning he was throwing bombs against directional schools with seconds left in the game just to make his team look better in the eyes of the media).

When he was at Florida, if I remember correctly, Spurrier once said that he always kept track of the spread. Not because he had money on it directly, but because (1) the spread was usually a gauge some writers/poll voters used to see if the team had performed up to expectations, and (2) he knew that the big donors to the program very possibly had money riding on the Gators. Keeping donors and fans happy he viewed as part of the job, and this was something he could control.

The rule as cited by Gerry and clarified by jason makes sense. Otherwise, every field goal attempt would be meaningless by the holder's being down between the snap and the kick.

For freaky geeks like me who have the NCAA Football Rules downloaded onto three different PCs, it's 4-1-3-b.

Applying the discussion and the rule to LSU's play on the field, I would think it was a judgment call on the refs' parts whether the kicker was still in position to kick the ball during the entire time that Flynn had possession with his knee on the ground. The safer play, I think, would have been for Flynn to lift his knee up as the kicker approached.

Great play altogether. Wonder if LSU had broken out the game film from their 1999 game against Auburn where Tubberville pulled that one out of his @$$.

I loved Joel Hodgson in "Mitchell."