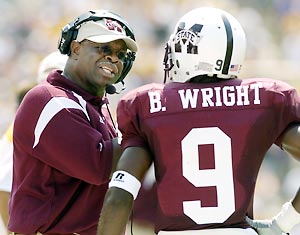 · Every fall, my friend Stanley, who runs a Web site called fleabomb.com, and I put our heads together and preview each week's Southeastern Conference games. The season's about to start, as you've no doubt guessed, and the week 1 previews are up -- my assigned teams are Georgia, Auburn, Kentucky, Vanderbilt, Florida, and Ole Miss, and Stanley has Alabama, Arkansas, Mississippi State, LSU, Tennessee, and South Carolina. As you'll see, whatever football expertise employed in these previews comes second in priority to simply snarking ruthlessly on all the teams, even the ones we like. Still, check 'em out. We'll be doing this all season long.

· Between my general flakiness and my complete techno-illiteracy, which goes for everything from HTML coding to turning up the volume on my cell phone, I've probably pissed off more people than anyone else in the blogosphere simply by taking forever to link them. Well, no more. Please welcome to the blogroll: Kathy McMullen, whose political blog Birmingham Blues did a bang-up job of calling shenanigans on the recent effort to bounce Patricia Todd, Alabama's first openly gay state legislator, out of the 54th District seat she'd won fair and square at the polls; longtime homey and fellow Georgia fan Mark Niesse, otherwise known as The Surly Poker Gnome; and another diehard Bulldog, Macondawg, otherwise known as Macondawg. Welcome aboard, and please remember the use of portable electronic devices is prohibited during takeoff and landing.

· Macondawg also gets props for providing a link to this man's pre-season top 25, which is perhaps even more snarky and condescending than the picks Stanley and I put together. Which is saying something.

· OK, did anyone watch the "Blind Date" edition of "Fear Factor" last night? I had the very weird sensation of seeing someone on TV who looked uncannily like this girl I used to go out with (above, the one on the right, dillwipe) -- the girl who was supposed to rescue the high-school "band geek" from the underwater stunt but couldn't because she couldn't hold her breath long enough. Turned out not to be her, of course, but still. If it had been her I probably would've had to call her out for not eating the potato-and-worm salad in the second segment. C'mon, now. You're better than that.

· Not to pile on the what-the-fudge-happened-to-Joe-Lieberman schadenfreude express, because Lord knows I would never, but who in the good-gosh-golly hell thought this would be an effective sales pitch for his campaign? I half expected a mom and her teenage daughter to walk onto the beach talking about their "not-so-fresh feelings." Joe's sure been making me feel not-so-fresh lately. 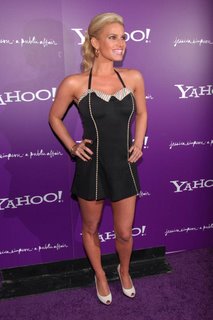 · OK, I know that according to Josh I'm not supposed to care about fashion, but since Josh, too, links to Go Fug Yourself, then I feel reasonably secure declaring this one of the funniest things I've read in a good long while.

Just for the record, I don't see anything that offensive about J-Simp's outfit. Then again, I am a dude, so when I hear the words "Jessica Simpson," "hemline," and "5-6 inches above the knee" in the same sentence, I'm kinda not paying attention to anything else. I dunno. You be the judge.

· Finally, since I never met an Internet widget I didn't like, here is where you can go (courtesy of EDSBS) to make your own "Colbert Report" You're On Notice! board. Mine is below. 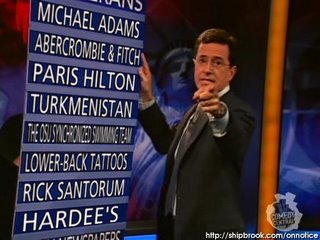 Email ThisBlogThis!Share to TwitterShare to FacebookShare to Pinterest
Labels: blogs that are better than mine, football, georgia bulldogs, hot chicks, Mystery Meat, politics

Honestly, Doug, if I were making a list of friends of mine who I'd've thought would've been big fans of lower back tattoos,you'd've been right there at the top.

Nope. I'm not against tattoos in general -- particularly since I have one -- but lower-back tattoos are over. I think my main objection to them is that I always think it's a bit of a girl's thong showing, and I'm like, "Heh, cool," but then it turns out it's not.

Good article on Fleabomb, Mr. Gillette. Whoever you are.

Buttstaches were trendy, once 'pon a time, and I think that the absolute worst way to follow a trend is to have it emblazoned in permanent ink across the base of your spine. Besides, the lower-back tat that was so cute when you were a college sophomore spending every evening at the gym doesn't look so great five years later on your I-keep-a-bag-of-Fritos-in-my-desk-drawer muffin top.

What have you got against Turkmenistan?

Saparmurat Niyazov, yo. He's like the trailer-park version of Kim Jong-Il.

And Ms. Simpson deserves a fashion citation. That outfit is a walking felony.