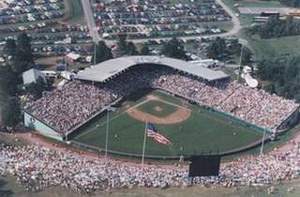 As promised, this is where I'll be liveblogging the world championship game of the 2006 Little League World Series, in which the U.S. champs from the Northern League in my hometown of Columbus, Georgia, will play the international champs from Kawaguchi City, Japan. As of right now, the world title bout has been rain-delayed from 3:30 Eastern to 4:00 p.m. (I feel kind of bad for the kids from Beaverton, Oregon, and Matamoros, Mexico -- their third-place game, which was to have started at noon, has been cancelled entirely.) I'll be getting started here whenever they do; please bear with me if I turn out to do a completely crappy job with this, since I've never liveblogged anything before (and we're also having guests over at 5).

Anyhoo . . . in the meantime, ESPN's LLWS coverage can be found here.

UPDATE @ 3:58 p.m.: OK, now the game has been delayed until 6:00 p.m. Yikes. At this rate, these guys may be playing well into Monday. Well, I'll still start the blogging whenever they start playing.

UPDATE @ 7:03 p.m., can I get a witness?: OK, ESPN says the game has been postponed until tomorrow night at 8 p.m. Eastern, 7 p.m. Central. I still plan on liveblogging as much of it as I can before my fantasy football draft begins at 9:00 CT. Full coverage of the LLWS, interspersed I'm sure with dramatic details of how I smoked everyone else in my fantasy league by grabbing the lead-pipe-cinch sleepers of the draft, tomorrow evening.
Posted by Astronaut Mike Dexter at 3:27 PM

So, um, has it become apparent to you that the game is already over? (Started at 5, not 8).