Now that the Blogpolling has begun in earnest and bloggers everywhere are rushing to both justify their rankings and belittle those of others, leading to the kind of trenchant, enlightening "You suck"/"No, you suck" debates that only the blogosphere can produce, it's also time to bust out with the series of regularly scheduled blogger roundtables to discuss all manner of things -- teams, coaches, polls, schedules, coffee, dogs, daughters, Darryl Strawberry, the long ball, you know, no big whoop.

Our first official roundtable of the 2006 season is brought to you by The House Rock Built, makers of fine Notre Dame-related blogs and blogging products for over 11 months. House, what say you?

1. What's the biggest ripoff in this preseason poll? Either pick a team that's offensively over- or underrated, or you can rag on a particular voter's bad pick (hey, we're all adults here, we can handle it).

I'm surprised to find that I don't have any huge, fiery objections to the initial poll. I'm not really feeling Florida as the #7 team in the country (though I put them at #10, so I guess I don't have too much room to complain), and I think Virginia Tech will only look better and better as the season progresses, but other than that I can't really find anything that really drives me into an Orgeronic fury.

Except for the Hawkeye fan over at The Bemusement Park who left Georgia off his preseason ballot entirely. He better find someone to start his car for him in the morning. But everyone else is safe for the time being. 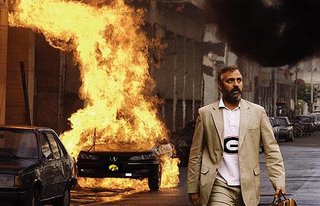 Nope, nothing to see here. Hey, anybody know where the Beirut chapter of the Bulldog Club meets up?

2. What shold a preseason poll measure? Specifically, should it be a predictor of end-of-season standing (meaning that a team's schedule should be taken into account when determining a ranking), or should it merely be a barometer of talent/hype/expectations?

It's risky enough to make a prediction on how good teams are right now, at the beginning of the season, when we haven't actually seen any of them play; trying to reach even further and predicting where they'll be at the end of the season seems, to me at least, like outright insanity. So I restricted my ballot to how good I think teams are right now, based on talent and coaching alone, without trying to take into account the millions of intangibles, potential upset/letdown situations, and other stuff that can affect a team's fortunes over the course of a four-month season. That's what I think a good poll should measure, and I definitely don't think it should be a preseason hype-barometer, since the outlets like ESPN and SI are already doing plenty of self-evident hyping. Two weeks before the start of the season, we're already being inundated by the usual boatloads of hype over Notre Dame, Auburn, and the like -- do we really need a poll telling us whom everyone's talking about?

3. What is your biggest stretch in your preseason ballot? That is to say, which team has the best chance of making you look like an idiot for overrating them?

Louisville at #8 is probably my biggest -- and given that the schedule they play is arguably a notch below what the elite squads from the other BCS conferences are up against, there's a chance that, even if Louisville goes buck wild this year, we'll never be able to determine whether they're really the eighth-best (or better) team in the country or just a pretty good team that fattened up on a bunch of weaklings. That said, though, if the Cards go 12-0 this season -- hardly outside the realm of possibility -- then I think there's a pretty airtight case to be made that whacking both Miami and WVU and never slipping up anywhere else are pretty good indicators of elite status.

Virginia Tech at #14 also makes me a little nervous, if only because I seem to be the only one who's high on them relative to FSU and Miami. But the more I hear about them, the more I like, and I think anyone who's automatically penciling the Hurricanes in as the Coastal Division champion in the ACC is making a grave mistake. 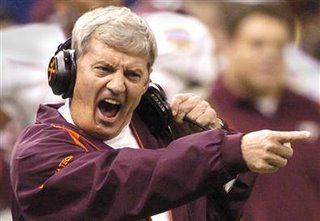 4. What do you see as the biggest flaw in the polling system (both wire service and blogpolling)? Is polling an integral part of the great game of college football, or is it an outdated system that needs to be replaced? If you say the latter, enlighten us with your new plan.

Well, to refer back to an earlier question, I think the biggest flaw is that, whether you're talking about sportswriter pollsters or coach pollsters or blogger pollsters, no two people have the same criteria for poll-worthiness when they're filling out their ballots -- you've got some people who are ranking the teams based on where they think they are at that precise moment, you've got some who are ranking them based on where they think they'll be at season's end, and others who might be ranking them relative to beginning-of-the-season expectations. Thing is, there's really no way to "correct" that -- you could issue a preseason edict to all your poll respondents saying, "Now, everyone make sure you ONLY rank the teams based on this and this and this," but that'd sound pretty stupid, and there wouldn't be any way of ensuring compliance in the first place.

So I think the current system of polling, while not perfect, is the best system we've got at the moment. As flawed or biased as human beings' judgment may be, I still prefer it overwhelmingly to computer polls; the idea that you can reduce something as complex and intangible-laden as college football down to mathematical formulas just seems really silly to me. If I had my way, I might at least experiment with the idea of waiting until four or five weeks into the season to start actually polling people, since by then voters would have a much greater pool of actual real-world knowledge about what they're judging; it might alleviate situations like we had in, say, 2004, where Auburn turned out to be one of the best teams in the country but was hamstrung all season long by a low-teens preseason ranking. Even without that change, though, I think the present polling apparatus is still the best idea anyone's come up with.

5. You're Scott Bakula, and you have the opportunity to "Quantum Leap" back in time and change any single moment in your team's history. It can be a play on the field, a hiring decision, or your school's founders deciding to build the campus in Northern Indiana, of all godforsaken places. What do you do?

Wow. I think this is one of the most intriguing questions anyone has ever asked in one of these roundtables. I guess I'd probably go down to Miami in June or July of 1944 and leave a big box of extra-strength condoms on the bedside table of the Rev. J. Graham Spurrier.

What? I can't use that? Not technically part of my own team's history? Screw you then.

I'm tempted to say I'd go back to New Year's Day 1983 and get someone to cover Penn State WR Greg Garrity better on his winning touchdown catch in the Sugar Bowl; had the Dawgs thus sealed their second undefeated, national-title-winning season in three years, that might've staved off the Dawg's slide from elite to merely-pretty-good status toward the end of Vince Dooley's reign. That still wouldn't have prevented us from hiring Ray Goff in '89, though, so here's what I'd do: I'd go back to January of 1989 and dump a boatload of money on the desk of the then-31-year-old Bill Cowher to become the Bulldogs' next head coach. I've already discussed in a previous roundtable why I think Cowher would be a monumentally badass coach for the Bulldogs, and if we'd somehow managed to keep him from trucking off to Kansas City to be the DC for the Chiefs in '89, who knows? Today he might be the 17-year veteran coach of the Georgia Bulldogs -- easily the longest-serving coach in the league, yet at only 49 years of age, still looking forward to many productive years ahead of him -- standing astride the world of college football like a colossus, with at least four or five SEC titles and probably a national title or two under his belt. Steve Spurrier would've still become the coach of the Gators and still done very well, but would've never been allowed to achieve the kind of soul-crushing dominance he did over the Dawgs. The '98 and '99 "losses" to Tech would've instead been guffaw-inducing Georgia blowouts. And you can be damn sure that jug-eared puke Tommy Tuberville wouldn't ever make any cracks about how Georgia "might want to run the ball more." Not unless he was itching for an unholy kneel-before-Zod beatdown from The Chin. 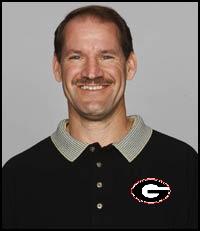 Not that Mark Richt isn't the Man, of course, but tell me this wouldn't have been sweet.
Posted by Astronaut Mike Dexter at 1:37 PM

What do you think of DawgSports repsonse to #5:

"I would go back in time to December 1980 and convince Vince Dooley to take the Auburn job."

He gives some interesting reasons for doing so.

I await to see what the Auburn guy says- I would want to have USC or OU lose a game in '04, or have that LSU palyer drop the winning TD pass in '88, which would have most likely set up a #1 vs #2 matchup with Nore Dame. Notice that neither gives us a National Title, but it least gives us a game where we could get one by winning that game.