Thursday mystery meat, and an opportunity for all you college-football fans to look S-M-R-T.

· Just out of curiosity, why did the authorities from Colorado or wherever pay for John Mark Karr to fly business class from Bangkok to LAX? According to the Thai Airways Web site, Karr's unrestricted business-class ticket would've cost 91,360 baht, which equals $2,436.57 -- whereas a restricted, economy-class ticket on the exact same flight would've cost nearly $900 less. You tell me whether John Mark Karr deserves complimentary champagne and fried king prawns. (Just in case you were curious, here's what Thai's new business class looks like.) 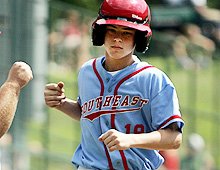 · Lord knows I've I've bagged on my hometown of Columbus enough over the course of doing this blog, so when something good comes out of C-Town, I'm going to call attention to it. Well, the Columbus Northern Little League team is in the semifinals of the Little League World Series tonight, so if you happen to be flipping through the various ESPN networks this evening and manage to catch a little bit of the game, cheer 'em on.

· Here's another Peach State athlete getting props: CollegeFootballNews.com has rated Georgia defensive end Quentin Moses the top DE in the nation and the number-two player overall.

· On the political tip, I'm going to make an admission that will probably surprise some of y'all: When I was living in Virginia in 2000, I voted in the state's Republican primary for John McCain -- partly because I thought he would make an infinitely better candidate than the empty-suit Bush, but also because I was seriously considering voting for him over Gore in the general election. Well, let's just say my respect for the "maverick" McCain has just about disappeared completely, because it's starting to look like the guy will just say anything to get elected. On "Meet the Press" Sunday, he basically said Bush's "stay the course" strategy is stupid, but that we need to continue it; he basically said Rumsfeld is a bad SecDef and needs to resign, but if Bush wanted to stick with him then that was fine. And then there was this comment to reporters earlier in the week:

[McCain] said the administration had failed to make clear the challenges facing the military. . . . McCain said that talk "has contributed enormously to the frustration that Americans feel today because they were led to believe this could be some kind of day at the beach, which many of us fully understood from the beginning would be a very, very difficult undertaking."

But here's what McCain said to Chris Matthews just a week before the war first started:

MATTHEWS: Are you one of those who holds up an optimistic view of the post-war scene? Do you believe that the people of Iraq or at least a large number of them will treat us as liberators?

Basically, it's like this: When it looks opportune to stand by Bush and support him, McCain will do that; when it looks advantageous to talk about what a shitty job Bush has done, he'll do that. He'll flip-flop back and forth between them as often as he needs to. Watch out for this as McCain's 2008 presidential campaign begins to gather steam over the next year or so.

· But lest you think I can never, never bring myself to say something kind about a Republican, let me point out that Sarah Palin (above), former mayor of Wasilla, Alaska, and the winner of the Republican primary for Alaska governor, is adorable.

· Finally, if you're an excellent college-football prognosticator, or even if you're just a shitty one who doesn't mind being wrong, wrong, wrong in front of a reasonably large group of people, join the College Football Pick 'Em Group I set up on Yahoo -- pick each week's Top 25 games against the spread, and at the end of the regular season the person with the most correct picks gets a sizeable cash prize a fawning we're-not-worthy post on this very site and, consequently, the respect of every single person who reads it. Yep, both of them! To sign up, go here, click on "Create or join group," "Join existing group," and then "Join a private group," and then enter group ID number 14719 and password "tereshinski" (no quotes, all lower-case). When you sign up, howsabout posting a message on the group message board letting me know who you are and which blog you run, if you have one. Good luck! 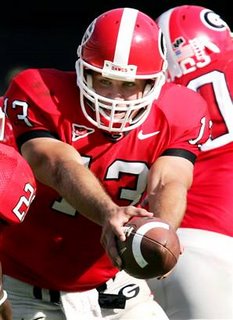 JoeT3 wants to know if you feel lucky. Well, do you, punk?
Posted by Astronaut Mike Dexter at 8:08 AM

What I heard about the business class ticket is you get the suspect nice and comfy and then he is more likely to spill the beans about the "accident". Yeah right.