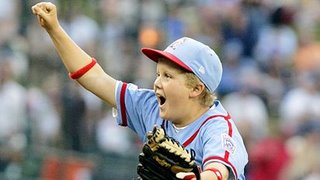 As I've mentioned before, my hometown of Columbus, Georgia, is not without its oddities and various embarrassments. But today we hold our heads up high, because today we stand but one step away from the top of the Little League mountain, for Columbus's Northern Little League team has beaten Beaverton, Oregon, in the Little League World Series to clinch the U.S. title and advance to the world-championship game tomorrow afternoon.

The road to the title bout has not been without the usual haters trying to harsh our team's buzz. First the apparently under-medicated mother of an Arizona player accused Columbus of throwing their Tuesday game against Lemont, Illinois, so that they wouldn't have to play the Arizona team again. Then, after the very same game, the Lemont coach accused power hitter Kyle Carter of showing "disrespect" to the game because he wears his cap slightly askew when, in fact, Carter wears it that way because he had a shunt implanted in his head as an infant to alleviate an arterial blockage (the Lemont coach still hasn't apologized). Then, after losing the game that advanced Columbus to the U.S. final, the Portsmouth, New Hampshire, manager suggested that Georgia baserunners were tipping off pitches. (Less conspiratorial, but still annoying, was the Atlanta Constitution's insistence on splashing today's front page with a big photo of Josh Lester crying to illustrate a story on young kids getting emotional in their sporting endeavors. Because every 13-year-old boy secretly pines to have a picture of himself crying on the front page of a major daily newspaper.)

But whatever, because the Bulldogs of Columbus Northern are headed to the world-championship game (so suck it, Arizona, Illinois, and New Hampshire!) tomorrow to face the winner of tonight's Mexico-Japan international matchup. And for the first time in my storied illustrious occasionally respectable blogging career, I will be trying my hand at liveblogging an event. Yup, some people do BCS bowl games; some people do political conventions; I do Little League.

But shut up, because it's Columbus, and we're a proud people. The game begins at 3:30 Eastern tomorrow afternoon and will be televised on ABC. Either watch the game or read this blog, because if you do neither, Kyle Carter and his skewed baseball cap will come to kick your ass.
Posted by Astronaut Mike Dexter at 6:59 PM

Doug, congrats to you and all the other Columbians. Or columbusonians. I've never really known what Columbus natives are called, now that I think about it.

What's really funny in those links is that you get the impression from reading the text of the articles and the comment sections that the parents and coaches creating the "controversies" in question are viewed by their neighbors as absolute crackpots. Or, in the case of the New Hampshire coach, a whiny little bastard.

Looking forward to it. I hope the boys bring it home. Carter and Lester are straight cold pimpin' bad mofos. At least as much as a 12-year-old can be.