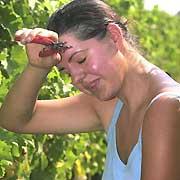 If I seem like I've been in a little bit of a pissy mood lately, it's because -- in what is evidently becoming an annual event in my household -- my air-conditioning window unit gave out at some point in the middle of the day Tuesday. So in the middle of the summer in Birmingham, Alabama -- one of the hottest summers on record, no less, in which the heat index has been well into the triple digits all week -- I get to sit around in a sweat lodge waiting to see if a repairman is ever going to grace me with his presence. For that reason, this week's Friday Random Ten is dedicated to the sensation of sitting in a third-floor apartment full of 100-degree stagnant air, marinating in one's own sweat.

Still, there are some reasons to smile, including DeepSouthSports' rundown of the hottest SEC coaching wives (and yes, I'm almost positive Katharyn Richt drives either a Yukon XL or a Suburban) and What's the Good Word's version of a Chan Gailey appearance on "Inside the Actor's Studio" that should make Tech fans happy. In the process, WTGW's Dan manages to coin an exciting new term, "taint-worshipping ass snackery of the highest magnitude," which can be defined as "the only level of fawning adulation directed toward one's coach and/or program that most college football fans will be satisfied with."

Your own Random Tens and/or offers to donate new air-conditioner units in the comments.
Posted by Astronaut Mike Dexter at 8:02 AM

Feel free to just throw that phrase into random conversation. You get the greatest looks.