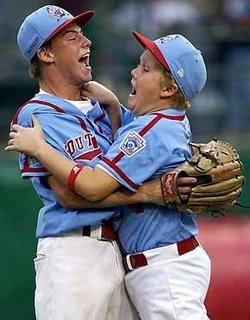 The Columbus, Georgia, Northern Little League All-Stars have won the Little League World Series, beating Kawaguchi City, Japan, 2-1 to take the world title. Kyle Carter struck out 10 batters in a complete-game three-hitter while Cody Walker scored the winning run on a two-run HR in the bottom of the third inning.

So where was I during all this? Uhh . . . sound asleep, blissfully unaware that the already-rain-delayed title match had been moved up to 5 p.m. Eastern from its originally (re-)scheduled time of 8 p.m. Which I only found out as I flipped on ESPN just now and watched, slackjawed, as they played the highlights from the game on "Baseball Tonight." Which means that, err, harrumph, my first attempt at liveblogging has been pretty much been, like most of my past relationships, over before it started.

But regardless, big ups to the Columbus Little Leaguers, who (as I mentioned earlier) weathered more controversy than any group of freaking 13-year-olds should have to and stayed focus to bring some pride to the Chattahoochee Valley. Between the Bulldogs going to the College World Series and the Columbus Little Leaguers winning the world title, it's almost enough to make you forget that the Braves are probably going to finish approximately 13,502 games out of first in the NL East. Congratulations, guys!
Posted by Astronaut Mike Dexter at 7:33 PM

No, that's not a reflection of your support for Columbus. It's just a warm-up for our fantasy football draft tonight.