"You been playin' that foos-ball again, haven't you, boy?" 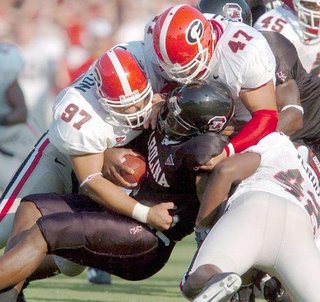 You're probably going to be seeing some additions to this blog over the next couple whatever, as the football season is going to start in just a few weeks and Hey Jenny Slater is now a proud member of the college football BlogPoll. Founded by Brian, newly famous poker shark and proprietor of the already famous mgoblog, the BlogPoll gives average Joes like myself a chance to do what sportswriters and coaches have been doing for eons, which is collectively offer their opinion on which are the best college football teams in the country. Only because we bloggers don't have to worry about newswriting or coaching responsibilities -- heck, I'd be willing to bet some of us don't have jobs of any kind! -- we actually have time to, you know, watch multiple games involving the teams we're actually voting on and stuff.

Anyway, each week during the season I'll be posting my "ballot" on here, which you're all welcome to rip apart mercilessly, and eventually the overall BlogPoll results will be posted over in the sidebar and updated regularly.

Now, if you're one of those people who thinks football is OMGZ TEH STUPID and you're thinking about storming out of here in a huff -- metaphorically speaking, of course -- I'll still be doing my usual blathering about politics, turd-witted celebrities (like, f'rinstance, Britney Spears, who has been proven beyond a reasonable doubt to be functionally retarded), the current state of affairs in Birmingham, and, of course, hot chicks. Only now there'll be a lot of football stuff along with it. If you still don't like that, too bad, though I promise that I will passive-aggressively pretend to care on certain special occasions.

At any rate, we are now but 26 days, 10 hours and 9 minutes away from the kickoff of South Carolina vs. Mississippi State on ESPN, which I consider to be the unofficial beginning of the college football season. I'm getting drunk, loud, and opinionated just thinking about it.
Posted by Astronaut Mike Dexter at 10:51 AM

Thanks to the link, I discovered that hailing from Grenoble, France come 2 (two) of the finest folk of all time: Melissa Therieau and Andre the Giant.