The Motherland is calling! We will rise up and ruthlessly defeat the enemy!

Now that Mark Richt's first five-year plan has come to a close, and with such smashing success -- 52 wins, two SEC titles, a 4-1 (dammit!) 3-2 bowl record, and a five-game win streak against our big in-state rival -- it's time to look forward to the next five years. Coach Richt has decided that the next five-year plan will begin under the leadership of Joe Tereshinski III, a good quarterback and a fine Slav, the fifth-year senior who comes from a long line of loyal and patriotic Bulldogs.

Some have questioned Richt's wisdom in making this move -- they would rather see heralded new recruit Matt Stafford take the reins. But I'm confident in Richt's decision. He knows the QB situation at Georgia better than anyone, and there's every reason to be confident in his abilities to develop each of our prospective signal-callers. I pointed out in the comments to this post at Paul Westerdawg's place that back in 2001, David Greene had even less experience than Tereshinski does now -- Greene was a redshirt freshman who had never taken a single snap in an actual game -- and yet he turned out just fine. As a recruit, Greene showed promise, but he was hardly an all-world five-star OMG prospect; still, he later became one of the best QBs in conference history. Tereshinski's natural talent may or may not be on Greene's level, but be that as it may, if we could win eight games in 2001 with a brand-new quarterback and a brand-new coach, it hardly seems outside the realm of possibility that we could win nine, ten, or even more this year with a slightly more experienced QB and a very seasoned coach.

My point is I think it's time for all good Bulldogs to rise up and show their faith in our great leader Richt, as I stated in the comments here. And I have used my mad MS Paint skillz to assemble some propaganda spirit posters, in the hopes that they will encourage Bulldog Nation to support our red (and black) army as they seize the means of production in the SEC and emerge victorious in our conference revolution. 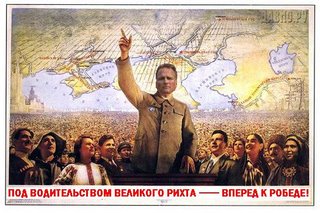 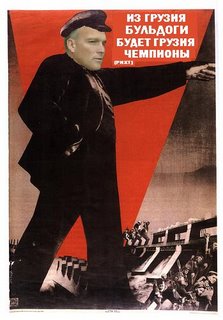 From Georgia Bulldogs will be Georgia champions 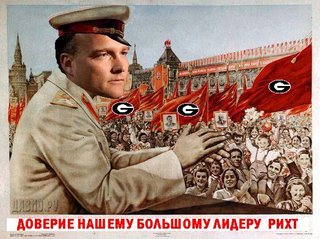 Trust in our great leader Richt

And my personal favorite, based on the slightly creepy poster here -- 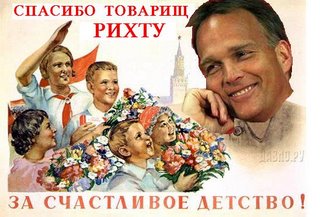 Thank you, Comrade Richt, for the happy childhood!

I had an idea for one based on this one in which Richt is standing beneath the smiling visage of former head coach and Hero of the Motherland Vince Dooley, but I couldn't find any black-and-white pictures that really worked. Oh well. Enjoy.
Posted by Astronaut Mike Dexter at 7:59 AM

Why, why, why did you have to go with the commie metaphor???? Of all the stupid ass... Why not a George Patton or Robert E. Lee or Yorktown or Midway or Tarawa or Guadacanal or anything but Lenin or Stalin?

Not to be a stickler, but the bowl record is actually 3-2.