Friday Random Ten, Football Is Back and I Feel Whole Again Edition. 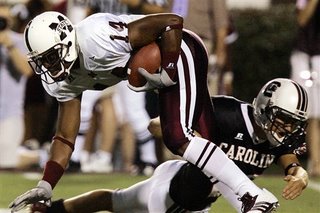 If you see a bunch of guys (or, hell, girls) walking around the Southeast today with blissful smiles on their faces and lit cigarettes in their mouths even though you can't remember that they were ever smokers, it's because college football officially began last night with South Carolina taking down Mississippi State 15-0 in Starkville. It is now on, as they say, like Donkey Kong.

And the thing is, kind of in the whole "Even bad sex is better than no sex at all" vein, the game wasn't all that great. And that's coming from someone who appreciates good defense and doesn't need every game to be a 48-45 shootout to be entertained. Good defensive play surely had a lot to do with the low scoring output in the USC-MSU matchup, but even so, State's offense looked godawful and Carolina's wasn't that much better, save for one OMG trick play in the fourth quarter that netted the Gamecocks their only touchdown and allowed Spurrier to close his eyes for just a moment and imagine he was back in Gainesville. (And even then, he probably had to feel a twinge of regret at the fact that it wasn't even a quarterback who threw the frickin' thing.) But be that as it may, it was football, so I'm happy, and you can now look forward to four or five months of beer-soaked debating and/or cheerleading, violent mood swings and "GO DAWGS!!!1!1!!" popping up in entirely random places on this site like "[blank] is gay" references in Wikipedia. 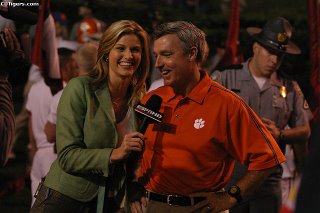 "Why, I'd be happy to tell you how we beat South Carolina. How about I buy you a drink and I'll tell you all about it."

Anyway, since this is the usual spot for the Friday Random Ten, I figured I'd throw in an additional Random Ten of unfocused, shot-in-the-dark predictions for the season to come:

1. Joe Tereshinski III will look a lot better than people think tomorrow. Against Western Kentucky, this will hardly come as an earth-shattering development, but in spite of the dire warnings of football fans both Dawg and non, he will retain a firm hold on the starter's job for the duration of the season, and by the end of the season people will be wondering why they ever wanted to throw Matthew Stafford into the mix rather than deck him out in the redshirt he will by then be wearing. (I'll let Mayor Kyle and Westerdawg do the actual legwork, to the extent that it can be done, of previewing the UGA-WKU game.)
2. Florida State and Virginia Tech will meet in an ACC Championship rematch in Jacksonville in December. One of them may be ranked in the top 10, but it won't be FSU.
3. Florida will start the season 5-0, but absolutely nobody will be saying that their offense looks ready.
4. Louisville will get revenge for a conference-title-killing loss incurred in 2005. Auburn won't.
5. Southern Cal will lose at least one conference game this season but still walk off with the Pac-10 title.
6. Both Notre Dame and Cal will find themselves in familiar territory at the end of the season when Notre Dame snags a BCS berth a lot of people think they didn't deserve and Cal gets screwed out of one.
7. The Conference USA race will be one of the most exciting in the country for those who are paying attention, and while my boyz from UAB won't win the conference title, they'll succeed in knocking someone else out of the race.
8. Playing solitaire on their cell phones in the unemployment line at season's end: Washington State's Bill Doba, Michigan State's John L. Smith, Missouri's Gary Pinkel, and UNC's John Bunting. Somehow still employed: Kentucky's Ralphie Wiggums Rich Brooks.
9. Tennessee will bounce back, but not far enough for people to be able to recall what they ever saw in Erik Ainge.
10. Nobody will go undefeated, leading to the biggest BCS controversy yet (which is saying something). The two one-loss teams in the title gane: Ohio State and Texas, in a rematch of their Sept. 9 game. The Buckeyes win the opening round, but the 'Horns take the one that counts.

I fully plan on copping to any of these that turn out to be wrong. Do you think I care about looking like an idiot? Dude, have you seen this site?

Anyway, here's the other Random Ten:

And now's the part of the show where we ask, And how are you doing? Put your own Random Ten, be it songs, football predictions, breakfast cereals, or favorite nudie bars, in the comments.
Posted by Astronaut Mike Dexter at 7:59 AM

Not just in the Southeast, Doug.

Not enough love out there for Joe T - glad you are showing some.

Sly Croom's offensive attack will henceforth be known by the derisive monikor, "One yard and a cloud of dust."