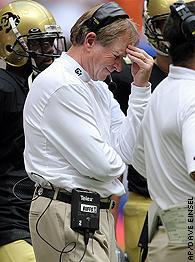 Did I forget to leave money on the nightstand again? Dammit! I always DO this!

· I don't want to show too much sympathy for any of Georgia's upcoming opponents, lest I once again have my UGA loyalty come into question, but you almost kind of have to feel sorry for the Colorado football program, looking at the shambles that Gary Barnett left it in. Actually, you kind of have to feel sorry for them that Barnett ever set foot in Boulder, because if you weren't already convinced that Barnett was a grade-A 10-megaton douchebag, his comments to the press this week should do the job:

"It tore me two ways," Colorado's former coach said Friday night. "I hurt for the kids. Those are my guys. I know the talent that we have there, the maturity and the leadership, and I want those guys to get everything they deserve, and I want them to play in the [Big 12] Championship Game again. Then, on the other side, I got taken out of that situation. I got removed from it and someone else made that decision. Part of me felt a little vindication because of it."

Let's completely leave aside Barnett's implication that his last three games as CU coach (30-3 home loss to arch-rival Nebraska, 70-3 anal vivisection by Texas, loss to Clemson in the Champs Sports Bowl) are head-and-shoulders above Dan Hawkins's first three -- can't wait to watch him make that case, by the way -- and take apart Barn's stratospheric ego for just a sec. So on the one hand, he wants his talented, mature, leadership-filled guys to win, sorta, but on the other hand, if they have to be completely humiliated so that his fired ass can feel "vindication," then ehh, he'll take it, huh? What a cocksucker. He presides over a recruiting scandal in which the terms "booze" and "hookers" feature prominently, then shrugs off a female player's rape accusations because hey, she was a lousy kicker, and the program basically turns into a joke, but after getting his richly deserved walking papers, Barnett feels "vindication" because the program is . . . still a joke? I seriously hope the question Barn answered about possibly succeeding Fisher DeBerry at Air Force was just pulled out of some reporter's ass and wasn't based on anything that Air Force is actually considering. It's not like they don't have enough problems as it is.

· On the other hand, maybe I don't feel too much sympathy for the Buffs after all (quote via Paul Westerdawg):

"If you watch the South Carolina game, South Carolina shot themselves in the foot a couple of times," [offensive tackle Tyler] Polumbus said of an 18-0 Georgia win. "They drove all the way and fumbled in the red zone, just like we did last week [against Arizona State], and they had a bunch of turnovers [six]. [must mean both teams combined -- ed.] They were moving the ball well on them, but they just shot themselves in the foot a lot. So, you've just got to play your game. It'll work. They aren't superhuman. Anyone can score on them."

Well, apparently not just anyone, killer. Say hi to Quentin Moses for me. 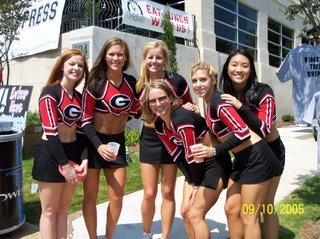 It's great to be a Georgia Bulldog, Chapter MCMXXVIII.

· Westerdawg also passes along the news that Georgia will send two cheerleaders to your birthday party if you can cough up enough money. They do specify "child's birthday party" rather than "dirty old man's booze-soaked birthday bacchanal," though, so I'm not getting too excited about this just yet. In the meantime, if you're looking for birthday ideas for Yours Truly -- and why wouldn't you be? It's a mere 255 days away -- you might start by contacting these cheerleaders, whose appearances, as far as I know, are not saddled with any age restrictions.

· On the topic of cheerleaders: How is it that Oregon can make their cheerleaders look so hot, yet when it comes to their actual football players, they can't aim any higher than "extras in the original 'Rollerball' "? 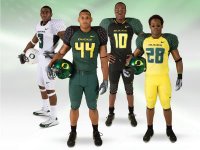 The mystery of the effed-up call in the Oklahoma-Oregon game is solved: The refs were simply distracted. I don't know that I would've been looking at the field, either.

· As for actual, substantive, non-booty-related football news (unless you mean USC quarterback John David Booty, perhaps), this week's new Blogpoll results are up over at MGoBlog.

· TBogg, one of the funniest, if not the funniest, political blogs on the Internets turned this many (4) on Tuesday. If you're not reading TBogg, shame on you; his snark is so funny that sometimes it quite literally causes me physical pain. And yes, that is completely distinct from the crushing emotional pain of being incapable of carrying on a committed relationship, yadda yadda . . . anyway, go check him out.

"I was the reason people actually paid money to see "The Whole Ten Yards" and you know it."

· Watched the premiere of "Studio 60 on the Sunset Strip" Monday night, and I might have a new favorite prime-time TV drama. I actually haven't watched a lot of prime-time network TV period since shortly after Aaron Sorkin, the creator of "Studio 60," left "The West Wing" after the '03 season, but this might get me started again -- the ensemble feel and quick-paced banter will seem familiar to anyone who was a fan of "West Wing," but whereas that show had an air of wide-eyed optimism about politics and creating a better America and blah blah blah, "Studio 60" really lets its sarcasm flag fly, and in many ways is the better for it.

· One more Georgia item: Former Bulldog and current Cincinnati Bengals linebacker David Pollack, who sustained a serious injury against Cleveland on Sunday, is out of the hospital and apparently doing pretty well for a guy who was carted off the field on a backboard just a few days ago. He's out for the rest of the season, which sucks, but the doctors say he'll make a full recovery, and it doesn't look like his career is finished. I wish him the best.

· Finally, wonders apparently will not cease, because doctors in China recently transplanted a new penis onto a guy who'd lost his in an accident. Maybe it's just because I'm a guy, but I see that as being way more impressive than a face transplant, even if they had to take it off two weeks later because it was apparently freaking out his wife. Good God, woman, the man's penis was restored! For once in your life, can't you think of somebody else? 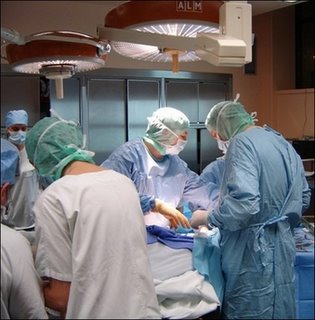 It's OK, it happens to a lot of guys. We can still cuddle.
Posted by Astronaut Mike Dexter at 9:39 PM

Oh wow, does that shirt in the UGA cheerleaders pic really say "Finish The Drink"? 1) Where can I get one and 2) Why didn't I think of that first??

The jury is still out for me on "Studio 60," though I will definitely check back in. The writing seemed better than the acting to me. Maybe it takes time for an ensemble to gel. I'll grant that it's probably not fair to compare a first episode to the best of Sorkin's "Sports Night" or "West Wing," which could both be outstanding.

I finally got around to watching the pilot of Studio 60 last night (had it Tivo'd, ya see), and I came away impressed with it. As you mention, the dialogue was superb, however as Danny said, some of the acting seemed a little stilted (I question what DL Hughley's character is really there for). I also was almost hoping that the first 5 minute rant that opens the show was the direction which they were going to go in, and let the show just be a platform to viciously skewer the idiocy of television. Then again, that's probably way too subversive for something put on a major network (after all, challenging programs get shifted to HBO, where no one watches them-- see The Wire). Nevertheless, I plan to watch this show-- anything that helps combat the girlfriends hegemony over the TV/TiVo is a good thing in my book.

Doug....is there something that you need to tell me? Seriously, I know you are a 'Skins fan but that has to be one of the fugliest collections of womanflesh purported to be hot that I have seen. That dude looks to be welcoming death rather than spend any more time around these leaders of cheer. If you want, next time you are in the ANTA I can procure you some strange on Ponce that would put that to shame, and at least 32% of them might have been born female.