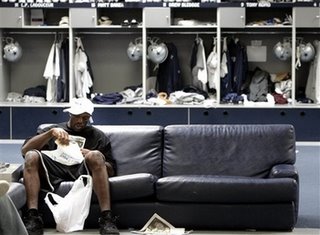 So we all now know that Terrell Owens did not, in fact, attempt suicide on Wednesday (probably), but did any of y'all hear the comment from his publicist at the press conference later on?

"Terrell has 25 million reasons why he should be alive."

So basically, T.O., your publicist just got up in front of a boatload of people and said money is pretty much all you've got left to live for. Not that some of us didn't think that already, but your publicist, T.O., she is not good.

Anyway, since T.O. apparently isn't suicidal after all, is it OK to start calling him a douche again? Get back to me on that one.

Your Random Ten, and/or reasons to live, are welcome in the comments.
Posted by Astronaut Mike Dexter at 8:10 AM

I like how the publiscist said "man of his statue." Hee.

But I bet she knows how to spell "publicist".

The 25 million is how you keep score. It is the narcicism that drives the suicide. If one perceives that the level of adoration has declined, one gets depressed regardless of the bank account.

Totally off topic, but I have found a Vol that Doug almost assuredly must support.

You can certainly call TO a douche, as far as I'm concerned. He's nothing more than an attention whore, IMO.