Blogpoll ballot #5: Colorado game? I'm sorry, I'm not familiar with this "Colorado game" of which you speak. 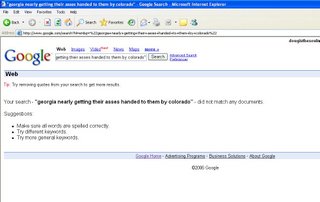 See? If Google doesn't know anything about it, then it didn't happen.

Oh, well. No point in denying it, that was one drag-ass day of football, save for the one minute and forty-three seconds in which Joe Cox was fearlessly piloting the Georgia offense down the field for the winning score. But I've recovered from both the near-loss and the Toaster-Throwing of Lot 49 to put together what I think is a reasonably fair and coherent ballot for this week's Blogpoll, which is as follows:

1. Ohio State (last week: 1)
With a couple of exceptions, everybody in the top 10 looked pretty much equally lousy on Saturday, so no changes in the top ten this week.

10. Virginia Tech (10)
Suddenly competitive Georgia Tech is right around the corner, and the Hokies had to suspend two of their most productive players. At my house we call them uh-ohs.

14. California (16)
Doing a bang-up job of putting the Week 1 Tennessee shocker behind them.

15. Clemson (21)
Every week I seem to have one team in the middle of the rankings making a really huge leap, and this week it's Clemson. They could've come out flat (like so many other teams did this past weekend) after a huge road win over FSU last week, but instead they absolutely annihilated UNC, with the injury-depleted defense doing a spectacular job.

16. Notre Dame (12)
Sorry, I don't get all that giddy over fourth-quarter comebacks when it comes to rankings, because it's a when-did-you-stop-beating-your-wife kind of thing: What were you doing down 16 to Michigan State in the first place?

19. Georgia (13)
Still don't get all that giddy over fourth-quarter comebacks, even when it's my team. You'd have to be clinically insane to call this a top-10-worthy team after the shitfest they pulled for 49 minutes against Colorado. The only thing keeping them this high is a keen awareness, developed through years of experience, of Georgia's tendency toward stank-assedly unfocused performances against early-season supposed-to-be-scrub opponents.

25. Boston College (20)
You lost to Chuck Amato. Into the Shame Closet with you.

Email ThisBlogThis!Share to TwitterShare to FacebookShare to Pinterest
Labels: Blogpoll